Miles of turquoise beaches in Punta Cana, Santo Domingo and its charming colonial centre, top-of-the-range hotels, scrupulously maintained golf courses, starred restaurants... These are the postcard images that come to mind when you leaf through a tourist guide on the Dominican Republic but the island of Hispaniola has many other wonders... Try the ascent of Pico Duarte, the highest peak in the Caribbean in the centre of the country. Watch for the humpback whale love ballet in Samana. Find flamingos on a leg in a salt lake. Ecotourism is developing, with a strong emphasis on preserved and magnificent regions such as the Southwest and Centre. The other strength of the Dominican Republic is also its mixed population and its music, of course, which resonates everywhere and at all times. The fiery dances, from merengue to bachata, punctuate national evenings and celebrations. And it's only a taste of the many facets you can discover about the Dominican Republic!

What to see, what to do Dominican Republic? 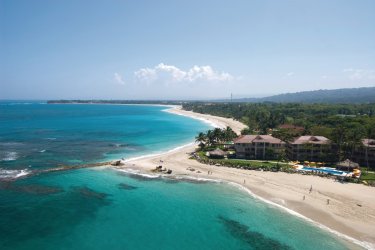 What to visit Dominican Republic ?

When to go Dominican Republic ?

You can travel all year round in the Dominican Republic. The high tourist seasons are between November and February, Holy Week before Easter, then in July and August. Two seasons are popular with tourists, from mid-December to March and from July to August, with a clear preference for the first. Holy Week before Easter with its famous red bean dish in April is also very popular. Of course, the rates of hoteliers and car rental companies take this into account. In low season, on the other hand, a reduction of about 20% to 25% on the rates is required. And you can negotiate! If you go to the Dominican Republic in January, go to Higüey on January 21 for the great procession for the feast of the Virgin of Altagracia, spiritual mother of the Dominican people. If you are going to the Dominican Republic in February, don't miss the carnival on the 27th

Due to the Covid-19 pandemic, entry and travel restrictions may apply Dominican Republic. Remember to visit the site of the Ministry of Foreign Affairs before you leave for the latest information
Practical information for travel Dominican Republic
Formalities Budget Horaires Getting around Gastronomy

In case you do not opt for an organised stay or for a holiday in an all-inclusive resort, we have put together a few ideas for stays, each lasting one week. It is possible to combine these three itineraries to create a tailor-made holiday. The first suggestion is a week in and around the capital, which concentrates most of the country's cultural heritage, with short day trips to the southeast coast, easily accessible from Santo Domingo. The second idea of trip concentrates on the Dominican coasts, all more beautiful the ones than the others, so that it is possible to extend to two or even three days each stage of the trip. The third proposal is aimed at sportsmen, combining scuba diving, hiking, board sports, climbing, golf... Pick and choose as you wish!

A week in Santo Domingo and its surroundings

The Dominican Republic, between seas and mountains

A great weekend in Santo Domingo

How to go Dominican Republic

Santo Domingo's Las Américas International Airport is located 25 km east of the city (30 min by taxi). The usual precautions are obviously recommended for people travelling alone (going out with a minimal amount of money, not getting into a taxi on the run, not changing money on the street...), but the Dominican Republic is a generally safe country. However, in the southwest, mainly in the Barahona region, it is strongly advised not to drive after dark.

Most tour operators offer trips to the Dominican Republic with all-inclusive stays of 10 to 15 days. These trips are generally excellent value for money if you intend to stay in a hotel with your feet in the water. But if you intend to visit the country, you will have to make excursions and prices are not usually given so be sure to check in in advance to avoid unpleasant surprises.

Domestic flights are quite expensive but useful for such a short period of time. The bus network is dense with good frequency, comfort and prices. For more mobility, you can rent a car. The only shipping line providing regular services is the ferry between Samaná and Sabana de la Mar, but cancellations are not uncommon due to bad weather conditions.

Enjoy a resort under the sun in the Dominican Republic

The Samaná Peninsula, idleness and water sports in Dominican Republic

The Dominican Republic is one of the first countries to be discovered by Christopher Columbus . In fact, its history is that of the odyssey of the discovery of the New World by the Europeans, from the disastrous first encounter with the "Indians" to slavery and successive independences... The eastern two-thirds of the island of Hispaniola are the breeding ground of particularities as well geological as faunistic, as well as social as artistic, but also linguistic and gastronomic, and it is indeed all this richness that the files presented here propose to explore. You will also learn more about merengue and bachata - two styles of music and dance born in the country - as well as the art of the Dominican cigar.

To the rhythm of merengue and bachata

This danceable, folkloric rhythm, which originated in the Dominican Republic, became popular in the 1960s and especially since the 1980s with the development of tourism. The bachata is a mixture of bolero, musical influences of African origin and other sounds evoking the merengue, the cha-cha-cha or the tango. Typical!

The carnival in the Dominican Republic is one of the most authentic of all the Caribbean. The Dominican particularity is that it takes place twice a year, on the anniversary of the national independence day, February 27, and of the restoration of the Republic, August 16. Masked parades, rum and good humor!

If you see someone waving a red rag at the side of a road, be careful! It means animals in transit or roadworks. Slow down! The herd, or even a single cow, is usually behind the next bend in the road. Some vehicles also hang this piece of cloth to indicate a balanced load.

This is the part of the rice that sticks to the bottom of the pan and is slightly burnt when it is prepared. It is customary in all families after finishing the first course to ask enthusiastically who wants concón, which is usually served with red beans. Dominicans love it, and we recommend it...

This is the traditional men's game played everywhere on the island and at all hours. A wobbly table and a few chairs are all the players need to set up and improvise a game that can last for hours. Particularly skilful, the players hold the dominoes in one hand and slam them noisily down on the board.

Tourism is the first source of foreign currency of the country. The most frequented areas are concentrated in the peninsula of Samaná, the north coast from Puerto Plata to Cabarete, the south coast in the region of Juan Dolio and the Coconut Coast with the spot of Bavaro - Punta Cana. It is there that the tourism in formula all-inclusive proliferates.

Classified as a UNESCO heritage site in 2016, merengue has a prominent place in the country. While the locals love to dance to some twenty rhythms, the most famous remains the merengue, a mixture of Spanish and African culture, influenced by the güira, an instrument made of a cylindrical brass rasp on which a scraper is rubbed.

If it is the cheapest way to get around the Dominican Republic, it is far from being the least dangerous. Since 2006, the motorcycles conchos (diminutive of moto con chófer - motorcycle with driver) gathered in union, the prices should be about the same everywhere, but in reality it is not. Do not hesitate to negotiate.

Don't be offended if you are approached in the street with " mi amor, mi cielo or corazón ": these little tender words are part of the common vocabulary for women, children and, incidentally, men. They simply show the kindness of the Dominicans. In the car, a horn blast will say the same thing.

This is a plantain banana, low in sugar, but high in starch, which makes it firmer, giving it a good resistance to cooking. Very abundant, it is one of the most consumed foods. It can be prepared in many different ways, fried or mashed, sweetened or salted, for example in a tostones way (fried slices)

You can smell smoked pork chop cooking at home while you're out.

You were afraid of the cuco when you were little.

You spill rum on the floor and exclaim: Eso e pá lo muerto!

You drink Brugal, Presidente or Mamajuana as if it were water.

You eat mangu or fried plantains with ketchup.