On the sea side, some 450 kilometres of coastline with enchanting coves and long beaches of fine sand; on the land side, picturesque perched villages and majestic forest massifs... From iodized sea spray to the heady scents of pines and eucalyptus trees, the Var gently unfolds under the omnipresent sun a cultural and natural heritage of a rare diversity. Every year, some 9 million tourists flock to enjoy family seaside resorts such as Hyères or Sanary, its architectural treasures such as the fascinating Thoronet Abbey and its hinterland with its steep hills ideal for hiking. Saint-Tropez is a must, and continues to be an attraction. Tourists stroll around the port known for its luxurious yachts, street painters, ice cream with a hundred flavours, merry terraces and luxury shops. The second largest tourist department in France, the Var is a territory with sparkling colours and exhilarating scents and flavours, whose charms have been praised for decades. While it is mainly appreciated by summer tourists, the Var offers beautiful discoveries all year round to the curious visitor who prefers its constant sweetness of life to its ephemeral popularity of July and August. The Var tourist guide will take you to discover its jewels such as the Gorges du Verdon and the Côte d'Azur.

What to see, what to do Var? 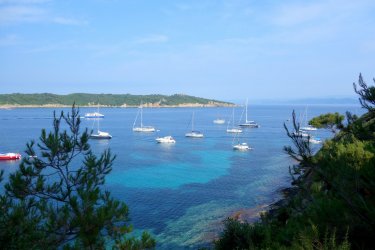 What to visit Var ?

When to go to the Var? The two best periods to discover the Var are either spring or autumn, which corresponds to the low season. Hotel and restaurant rates are much lower than in summer during this period and the beaches are almost deserted. As for the climate, it is ideal, warm but not too hot, and you can often swim from spring to late November in autumn. Winter is the very low tourist season but the climate remains mild with the possibility of many hikes under the sun. The high tourist season is of course summer, in July and August, the roads are crowded and the fares are easily tripled. It is then really necessary to book your stay well in advance. The Var is, in fact, one of the most touristic regions in France and it is not only appreciated by the French but also by a very large number of foreign tourists. However, if you choose to stay in the Var in summer, it is the right time for outdoor festivals.

A Var estate wins another gold medal for its olive oil

Why is the Var an ideal destination for camping?

The Var gently unfolds its cultural and natural heritage of rare diversity under an ever-present sun. Every year, tourists flock to enjoy its family-friendly seaside resorts, its architectural and archaeological treasures, and its hinterland with its rugged terrain suitable for both hiking and whitewater sports. The Var is a favourite department of the French, a land of traditions and contrasts, of shimmering colours and exhilarating scents. Although it is mainly popular with summer tourists, it promises beautiful discoveries all year round to the curious visitor who prefers its constant gentle way of life to its almost too short-lived popularity in July and August. In summer, if its beaches remain a major asset, dare to go inland to admire its striking relief and its pretty villages.

More than a simple moment before the meal, the aperitif is an art of living to which the Var people are very attached. A direct expression of the region's southern conviviality, it is also and above all an opportunity to enjoy the mild summer evenings, in settings of often unsuspected beauty. A social and family activity

A land of tradition, the Var is rich in talented craftsmen. A know-how often secular, transmitted in family, which gives birth to productions without equal. Pottery, ceramics, Christmas crib figures, fabrics, but also soaps and sculptures, all a precious living heritage that you will find from village to market

The song of the cicadas is characteristic of the Mediterranean regions in summer. Of course, you will hear them everywhere in the Var during the summer season. It is in fact the males that sing to attract the females, the sound is emitted by the cymbals located in the abdomen of the insect. This is why it is called "cymbalization".

The Var is proud to produce an exceptional olive oil, among the best in Provence. A true cultural and culinary identity, this oil benefits from several PDOs in the department. Olive oil is also renowned for its health benefits and brings a touch of sunshine to your cooking.

The Var has several islands, including Bendor, Les Embiez, etc. The most famous Var islands are the Golden Islands off Hyères, starting with Porquerolles, renowned for its crystal clear waters. Port-Cros, Europe'sfirst national land and marine park, is just as popular, while Ile du Levant welcomes naturist tourists

Its mauve colour colours the fields in the summer, its delicate perfume perfumes the interiors of Provençal homes, lavender is an emblem of the Var and Provence. The delicate fragrance of this plant and its derivative, lavandin, is frequently used in perfumery. 84 tons of PDO essential oil are produced each year.

Ah the sweet perfume of the mimosa! These small flowers in the shape of yellow buttons were introduced from Australia on the French Riviera and one finds many in the Var. They grow in winter and are even the subject of festivals such as the corso fleuri in Bormes-les-Mimosas where 12 tons of yellow sprigs and 80,000 flowers dress up a dozen floats.

It is impossible to evoke the Var region without mentioning the wild nature that has developed there for millions of years. A beautiful, raw and preserved nature. Unique landscapes that take your breath away, breathtaking cliffs and elegant rivers. A stay in the Var is a good breath of fresh air between scrubland, pines and cypresses.

This emblematic Mediterranean tree is very common in the Var. You will see them along the streets and on the coast of most of the towns in the Var, the most famous being Hyères-les-Palmiers, which has the largest number of palm trees in France. There are so many of them on some of the avenues in Hyères that you might think you were in Miami!

This famous game typically from Provence was born in 1907. A player, suffering from rheumatism and unable to move, drew a circle around himself and threw his ball "with his feet fixed" in the ground. Thus was born this derivative of the Provençal ball that Pagnol evoked in his works. More than a simple leisure activity, petanque is a real sport.

The Var coast, which stretches over more than 400 km of sea front, is shaped by numerous capes and bays dotted with islands. The beaches are numerous and varied: creeks, fine sand or pebble beaches, windy or calm beaches, with deep waters or for families... Everyone will find something to enjoy on the beaches of the Var!

This is probably the first wine that comes to mind when you think of the Var. A nice cool rosé on a terrace or by the water, that immediately puts you in a holiday mood! Minuty, Bandol... Several Var AOC appellations are world famous and several Var rosés are considered to be the best in the world

You say "Oh fan" or "Oh fatche de" when you hear surprising news.

You spread anchoïade or tapenade on bread rolls for the aperitif.

You miss the palm trees as soon as you leave the department.

You grumble when you see the tourists who start to arrive in the summer.

You take out your coat when it's only 15 degrees in winter.

You took optimist lessons when you were in primary school.

You find that Parisians point when they speak and that their accent is weird.

You only drink rosé from the Var, because other rosés are not as good!

You unconditionally support OM and RCT.

You go shopping at the market every weekend.

You think that the people from Marseille and Nice are "showing off".