On the shores of the St. Lawrence River, Quebec City, the cradle of French civilization in America, is a prosperous and touristy city. Jacques Cartier, a navigator and explorer from Saint-Malo, is known as the first Frenchman to have discovered, in 1535, the region of Quebec, then occupied by the Iroquois, on behalf of the King of France. A UNESCO World Heritage Site, Old Quebec, a historic district, invites you to stroll through its cobblestone streets. Quebec City, a fortified city in its natural setting, is home to magnificent neighborhoods, including Petit-Champlain and Place Royale with the oldest stone church in North America and a giant mural that traces the 400-year history of Quebec. Among the must-sees are the sanctuary of Sainte-Anne-de-Beaupré, the park and its Chute-Montmorency, the Jacques-Cartier National Park where you can ski, bike, hike, fish, kayak, or even the Île d'Orléans, separated from the city by a bridge, with its villages and its farmers. The gastronomic scene of Quebec City adds to the pleasure of your stay. Thus, this destination is both cultural and sporty, natural and gourmet. And as a bonus, the friendliness of Canadians.

What to see, what to do Québec? 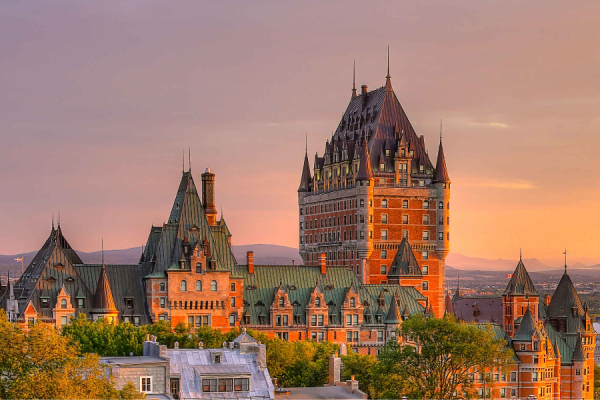 What to visit Québec ?

When to go Québec ?

Quebec City and its surroundings are beautiful in all seasons. In winter, you can enjoy traditional, hearty dishes in preparation for a trip to the Carnival or a dog sledding excursion. In summer, streets, esplanades and parks are transformed into popular open-air festivals. The enchantment of colors in autumn and the great gourmet tradition of the sugar shack in spring are also among the favorites of visitors. All in all, Quebec City is waiting for you all year long!

Due to the Covid-19 pandemic, entry and travel restrictions may apply Québec. Remember to visit the site of the Ministry of Foreign Affairs before you leave for the latest information
Practical information for travel Québec
Formalities Budget Horaires Getting around Gastronomy

Quebec, its old city and its resort

Cultural trip on the Quebec roads

How to go Québec

With one of the lowest crime and assault rates in the world, Quebec is a particularly safe destination, including Quebec City itself. No need to worry. Moreover, it is very easy to organize your stay in Quebec City by yourself, especially since you will understand the language and they will even understand you with the accent!

In Europe as well as in Quebec, many tour operators are specialized in Quebec and offer you stays in Quebec City. They organize your stay according to several formulas of your choice. However, the programs are sometimes very (too) busy, so you may end up on your knees!

It's quick and easy to get from one place to another in Quebec City, whether by car, bicycle or public transit. Quebec City has a reliable public transit system, a safe and well-developed bicycle network and a vast highway system. Walking is an excellent way to immerse yourself in the old city.

As the cradle of the province of Quebec and a bastion of French culture in North America, Quebec City is a jewel. Since the creation of the Canadian Confederation in 1867, it has been the political capital of the province of the same name, and its great pride. It is also the only walled city north of Mexico, and its old quarter, Old Quebec, is a UNESCO World Heritage Site. Old Quebec is made up of an Upper Town, atop Cap Diamant, and a Lower Town, between the cliff and the St. Lawrence River. On foot, a thousand charms are revealed as you stroll through its narrow cobblestone streets, stairways, shady squares and gardens. Outside the walls, Québec City is a modern city, dominated by a few high towers, a political, administrative and university centre as well as an industrial and port hub. In short, Quebec City is anything but ordinary.

In the footsteps of New France

Beware, this is a highly sensitive subject! Quebecers, who are at home here, consider that it is the French who have an accent. We can't prove them wrong on this point. So to discover the local kindness, the rule is simple: leave your prejudices about the Quebecois language when you get your suitcase at the airport.

It is THE fast food chain in the Quebec City area, with more than twenty branches with late closing hours. For only a few dollars, you can clearly satisfy your fast food cravings. But please, if you've never tasted the famous poutine, don't try your first experience here.

It's hard to get past the mascot-emblem of the Quebec Winter Carnival! A true ambassador of Quebecers' joie de vivre, everyone, including tourists, directly associates his image with that of the Carnival. Several songs have been composed in his honour, including the unavoidable Salut Bonhomme that you will surely hear.

Named in honor of the governor of New France, it has stood on the side of Cap Diamant since 1893. Now a 5-star hotel owned by the Fairmont Group, it has more than 600 rooms, several restaurants, stores, etc. To see: the documentary Vie de château which goes to meet the workers and admirers of the castle.

It's an obligatory pilgrimage for any self-respecting visitor: you must go and see the famous Montmorency Falls up close. It is certainly not as wide as Niagara Falls, but it is about thirty meters higher. The site is also absolutely magnificent, facing the St. Lawrence River and the Île d'Orléans.

Québec City has a steep incline between Lower Town and Upper Town. So be prepared to get some exercise when you visit Quebec City, especially if you're going up the slopes - some of which are very steep - on foot. If necessary, you will find an elevator at the end of rue de la Couronne and a funicular in the Petit Champlain.

These small Quebec businesses open very late at night and every day of the week. Some even work day and night. You can buy newspapers, cigarettes, beer, milk, canned food, some fresh produce, sweets, etc. The prices are higher there than in the supermarket but, as their name suggests, it's a convenience store.

Québec City's fortifications are an architectural ensemble that recalls the city's military past. They were erected under French and English regimes and encircled Old Quebec for 4.6 kilometres, thus securing the heights of Cap Diamant. Quebec City is the last fortified city north of Mexico.

Hockey is the national sport par excellence. Since the departure of the Quebec City team in 1995 (the Nordiques, now the Colorado Avalanche), fans in the capital have been crossing their fingers for the return of the sport to the city. This is the main reason for the new multipurpose amphitheatre, the Centre Vidéotron. To be continued...

An Aboriginal nation lives in the vicinity of Quebec City: the Huron-Wendat of Wendake. The Wendat, known as the Huron by the French, are a people of farmers and hunters, skilled warriors and diplomats, democrats and outstanding merchants. They have earned the respect of many communities living in eastern Canada for centuries.

A major river axis and vital commercial link, the St. Lawrence Seaway connects the Great Lakes to the Atlantic Ocean over several thousand kilometres. Quebec City is built on its shores, with Cap Diamant and the Château Frontenac overlooking it. Kébec also means "where the river narrows" in the Algonquin language.

This is probably the biggest topic of conversation among residents of the region. Elected officials from different levels of government are currently working on the construction of a tunnel linking Quebec City to Levis to relieve the daily traffic on the two bridges. Opposition is strong, but the project should go ahead anyway

You order "a" frite at the restaurant or wait for "the" bus. You also pronounce "baleine" and "poteau" like your French cousins, not like Montrealers.

You still believe that the Nordiques professional hockey team will make a comeback in the capital. And for you, Alain Côté's goal should have been accepted on April 28, 1987, during Game5 of the Adams Division against the Montreal Canadiens.

You were camping with your buddies on the Plains of Abraham after the big St-Jean (Quebec Day) party. It was indeed a very different time!

Springtime means, above all, the unveiling of the Quebec City Summer Festival program and the sale of passes.

Other destinations nearby Québec