During their trip to Quebec, a province of Canada, visitors will be surprised by the vastness of this territory. Loggers, sugar shacks and maple syrup are still part of Quebec culture. And winter is as impressive as they say. But the culture of the Belle province is above all that of the Frenchman of America. Thus, from one end of this vast territory to the other, we will appreciate the legendary hospitality of Quebec's cousins. In its cities with a strong identity, such as Montreal and Quebec City, as well as in its immense nature. The national parks (Jacques Cartier, Gaspésie, Mont Tremblant) and nature reserves invite visitors to immerse themselves in the majestic beauty of the water bodies that entwine the dense and mysterious forest. The fauna and flora are diversified and activities practiced all year round, such as sled dogs, whale watching, hiking in search of black bears or sea kayaking, will satisfy lovers of the outdoors and open spaces. The beaches, with white, ochre and pink sand, will also seduce you. Whales thrive in the Saguenay Fjord and Gulf of St. Lawrence, harp seals give birth on the ice floe in the Magdalen Islands, moose and caribou nestle in the vast forest... A Quebec tourist guide will help you make the most of this colourful province, rich in human, historical and territorial diversity, which promises both a total change of scenery and a feeling of "home" for Europeans

What to see, what to do Quebec? 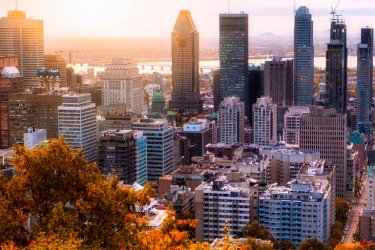 What to visit Quebec ?

When to go Quebec ?

Quebec is beautiful in all seasons, but depending on your interests, certain times of the year are best. Here are some tips on when to go to Quebec.

High tourist season: mid-May to mid-October, mid-December to January, and February. Lovers of nature and the outdoors will certainly find their happiness at all times, but summer and winter are more suitable for outdoor activities. However, the magic of the colours in autumn (September and October) is worth a visit. In the summer, Quebec lives to the rhythm of festivals of all kinds, especially in June and July in Montreal and Quebec City. Although many major festivals offer year-round programming, summer becomes a pretext to transform streets, esplanades and parks into real open-air popular festivals. To live a total experience at the heart of the purest traditions of Quebec, winter is the perfect time to do so. Snowshoeing, dog sledding or snowmobiling, ice fishing, hockey, Quebec Winter Carnival... It is also the ideal season to taste traditional dishes such as tourtière, cipaille, stewed meatballs and other hearty dishes that will help you hold out during the cold. As early as March, a trip to the sugar shack is a must.

Low tourist season: mid-October to mid-December, January, March and April to mid-May. Between January and March, you can also enjoy the pleasures of Quebec winter, without the hustle and bustle of school holidays. A good plan to find yourself alone in the middle of nature.

Due to the Covid-19 pandemic, entry and travel restrictions may apply Quebec. Remember to visit the site of the Ministry of Foreign Affairs before you leave for the latest information
Practical information for travel Quebec
Formalities Budget Horaires Getting around Gastronomy

There's no shortage of ideas when it comes to planning your trip, but there's no shortage of time. And it is important to remember: Quebec's territory is immense, truly immense. Once this notion has been well assimilated and everyone's little preferences have been determined, one approaches euphoria with the conception of the coveted itinerary.

It is worthwhile consulting the website of each of the regional tourist offices. They put forward numerous ideas for tours, with a particularly wide range of gourmet options. You can choose other themes such as antique dealers, New France, the Chemin du Roy, mountains, navigators, lighthouses or whales. Here are also some suggestions so that you don't miss anything about the destination, from a short to a long stay, as well as a few essential themes.

How to go Quebec

Quebec is a very welcoming region. You will not have the language barrier and the cultural codes are not very far from ours, which facilitates contacts and exchanges. You will have to rent a car and take into account the long distances between the sites, but solo travel is very easily possible.

Quebec is a very popular destination for French tour operators. Several types of stays are available, including large cities such as Montreal and Quebec City, large natural parks such as Mont-Megantic or the Saguenay Fjord. Stays are often centred around a season and activities that correspond: sled dogs, snowshoes and sugar shacks in winter; music festivals, kayaking and fishing in summer.

Many regions of Quebec are served by domestic flights, but fares are not cheap at all (except for the new Montreal-Quebec City route offered by Westjet). However, if you want to fly to Toronto or another major Canadian city, the fares are much more affordable. Quebec has a vast network of ferries. The Quebec network is well organized but recently, many small municipalities are no longer served, particularly on the Orléans Express network.

Montreal High Lights: a festival to celebrate winter in Quebec

Quebec may be a favourite destination for French-speaking Europeans, but its image is often adorned with clichés east of the Atlantic. But are they really? To help you get to the heart of the matter before you set foot in the province, this chapter provides an overview of the history that has shaped the province, its cultural melting pot resulting from various waves of immigration - not to mention the First Peoples who have inhabited the territory for thousands of years - and its economic and social issues, its gastronomy, which is not limited to maple syrup and poutine, its artists who make Quebec culture shine throughout the world, its climate, which can push the mercury from one extreme to the other, and its ever-present struggle to ensure the survival of the French language for future generations... In short, we paint a portrait of this beautiful province with its legendary hospitality.

My sugar shack in Canada

Beware, this is a highly sensitive subject! Quebecers, who are at home here, consider that it is the French who have an accent. We can only agree with them on this point. So to discover the local kindness, the rule is simple: leave your prejudices about the Quebecois language when you get your suitcase at the airport.

They are divided into eleven distinct nations, established from the southern border to the borders of Quebec's Far North. Their culture and traditions are of incredible richness, intimately linked to Mother Earth, which they defend tooth and nail. To get to the heart of the matter first-hand, Aboriginal tourism is a memorable experience.

Artisanal breweries and microbreweries are sprouting up like mushrooms all over the province. And Quebecers have become true beer geeks, as evidenced, for example, by the queues at the famous bottle releases (limited edition beer sales, directly at the brewery). A craze that continues.

They are everywhere, in the city and in the region. Adored by Quebecers, they are in a way part of the local heritage. All kinds of high-calorie specialities are eaten on the go, such as burgers, poutines, club sandwiches and the like. But what makes the reputation of a good snack first and foremost is its homemade fries.

These small Quebec businesses open very late in the evening and every day of the week. Some operate even day and night. We buy the newspaper, cigarettes, beer, milk, canned food, some fresh products, confectionery, etc.. The prices are higher than in the supermarket but, as the name suggests, it helps.

It's true they're cute. It is also true that they are omnipresent, especially in Montreal where their size can sometimes surprise. There is not a single tourist who is not tempted to take a picture of these little hairy animals. Can we prove them wrong? However, we recommend that you do not get too close to them, as a bite has quickly arrived.

It is the national sport par excellence. Would you like to see the Montreal Canadiens play? Make your reservations well in advance because some duels are highly coveted, especially against Toronto, Boston and Chicago. And if you value your life, we strongly advise you not to parade around in the streets wearing the Boston Bruins jersey, the sworn enemy.

Quebecers are bon vivants and particularly appreciate humour. So much so that a National School of Humour was founded in Montreal in 1988. Since then, the school has graduated nearly 700 creators, authors and comedians, including many of the great contemporary names in Quebec humour. Some have even exported their talent to Europe.

It is on everyone's lips, especially since the adoption of the Law on State Secularism promulgated before the summer break of 2019. One can be for or against it, but it is nonetheless trying to bring closure to a societal debate that has been going on for too long. It remains to be seen what the medium-term impact of this law will be, particularly on immigration.

Made up of lakes and rivers, it is a large forest estate owned by a company that offers lodging and recreational fishing, hunting and trapping. Over time, the outfitters have become true vacation destinations and now offer a multitude of other outdoor activities.

A major river axis and a vital commercial link, the St. Lawrence is a river, estuary and gulf. It connects the Great Lakes to the Atlantic Ocean over a few thousand kilometres. Most of the population is concentrated along its banks. It is also here, from May to October, that the many marine mammals come to feed.

You queue up to take public transport. Unlike in France, here everyone lines up before getting on the bus.

You don't forget the service in restaurants, bars or taxis. If it is called "tip", the tip is here an integral part of the salary. A good service deserves about 15% tip, which is only slightly more than the amount of the two taxes combined, which is 14.975%.

You calculate the distances in hours of driving and not in kilometers, Quebec excesses oblige.

The weather is your main topic of conversation. You're the first to go shirtless on the terrace as soon as the temperature reaches 10°C in the spring. However, you put on your best woollens in the fall when it's 10°C...

You know how to handle the art of swearing, without exaggerating the pronunciation or the intonation. This also requires a perfect mastery of its use in different contexts.