Rich in the mix of waves of immigration that have made it one of the most popular multicultural cities in Canada and the world, Montreal never ceases to amaze and reinvent itself. Between its parks and steeples, its skyscrapers and its historic district, Old Montréal is a city that is highly praised for its quality of life, its openness and its bilingualism. With this diversity, this metropolis of Quebec continues to evolve and redefine its identity in the eyes of the world, gradually establishing itself as an exceptional city in many respects. It is true that it has many attractions, and it is not a surprise if you find so much to do, from festivals to cultural routes, from bicycle paths to the countless restaurants that line its streets. Montreal also has a young and dynamic side with its many colleges and universities, including the renowned McGill University. In short, a lively city, full of history and which will certainly charm you! Following the advice of a Montreal tourist guide will allow you to discover Montreal's emblems: the Plateau Mont-Royal, the Foufounes électriques, poutine, the botanical garden, ice skating on frozen lakes, the history of Jacques Cartier to discover at the Centre d'histoire de Montréal and the art and music festivals

What to see, what to do Montreal? 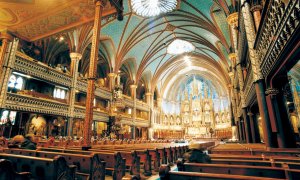 What to visit Montreal ?

When to go Montreal ?

Montreal is beautiful in all seasons, but depending on your interests, certain times of the year are best. Here are some tips on when to go to Montreal.

High tourist season: mid-May to mid-October, mid-December to January, and February. Lovers of nature and the outdoors will certainly find their happiness at all times, but summer and winter are more suitable for outdoor activities. However, the magic of the colours in autumn (September and October) is worth a visit. In the summer, Montreal lives to the rhythm of festivals of all kinds, especially in June and July. Although many major festivals offer year-round programming, summer becomes a pretext to transform streets, esplanades and parks into real open-air popular festivals. To live a total experience at the heart of the purest traditions of Quebec, winter is the perfect time to do so. Snowshoeing, dog sledding, snowmobiling, ice fishing, hockey, Montreal winter carnival... It is also the ideal time to try traditional dishes such as tourtière, cipaille, stewed meatballs and other hearty dishes that will help you hold out during the cold

Low tourist season: mid-October to mid-December, January, March and April to mid-May. As early as March, a trip to the sugar shack is a must

Due to the Covid-19 pandemic, entry and travel restrictions may apply Montreal. Remember to visit the site of the Ministry of Foreign Affairs before you leave for the latest information
Practical information for travel Montreal
Formalities Budget Horaires Getting around Gastronomy

A great weekend in Montreal

How to go Montreal

Montreal is very accessible for individual French travellers. First, because you will not have a language barrier, and second, because Quebeckers are welcoming and warm people. Finally, Montreal is easy to discover on foot and by public transit. No problem then to go there alone.

Montreal is a common destination for French tour operators. If you are going on an organized trip, you will probably benefit from negotiated hotel rates and airport transfers and possible day trips. Guided tours will be a plus when you discover the city.

Bus, metro, Montreal is very well served by public transport. In winter, it is very easy to use them regularly. In summer, you can enjoy the city by discovering it on foot. If you plan to leave the city, it will be easier to rent a car, starting at $30-$40 a day.

Montreal High Lights: a festival to celebrate winter in Quebec

Art Souterrain: showcasing the underground heritage of the city of Montreal

Montreal High Lights: many festivities to warm up the winter season

Attention, this is a highly sensitive subject! Quebecers, who are at home here, consider that it is the French who have an accent. We can only agree with them on this point. So to discover the local kindness, the rule is simple: you leave your prejudices about speaking Quebecois when you pick up your suitcase at the airport.

Artisanal breweries and microbreweries are growing like mushrooms all over the province. And Quebecers have become true beer geeks, as evidenced, for example, by the queues at the famous bottle releases (sale of limited edition beers directly at the brewery). An infatuation that continues to this day.

We could have a brunch every Sunday in a different place as the offer is so vast... and varied, from the classic egg-bacon-potato dishes to inventive little dishes to share, including traditional lunches from all over the world, without forgetting the famous Benedictines that come in all sauces... for our greatest pleasure!

These small Quebec businesses open very late at night and every day of the week. Some even operate day and night. You can buy newspapers, cigarettes, beer, milk, canned goods, some fresh products, candy, etc. The prices are higher than at the supermarket, but as the name suggests, it's a convenience store.

They're cute, all right. It's also true that they are omnipresent, especially in Montreal where their size can sometimes be surprising. There is not a single tourist who is not tempted to take a picture of these little hairy beasts. Can we prove them wrong? However, we recommend that you don't get too close to them, a bite can quickly happen...

After the first frosts following the summer period, usually in mid-October, the Indian summer is the result of hot flashes from the Gulf of Mexico towards Quebec that redden the foliage. It is said that the Native people took advantage of this mild period to perfect the reserves before winter... hence the expression.

"My country is not a country, it's winter," Gilles Vigneault used to sing. These long snowy months are harsh and punctuated by several major storms in the east of the country. And if rain is now sadly inviting itself, let us note that in 2014 and 2015, Quebec was the only place in the world with below-normal winter temperatures ...

It is the national sport par excellence. Would you like to see the Montreal Canadiens play? Be patient to find tickets, they are almost all sold out before the season even begins. And if you value your life, we strongly advise you not to parade through the streets in the Boston Bruins jersey, the arch-enemy.

Montrealers are bon vivants and particularly appreciate humour. So much so that a National School of Humour was founded in Montreal in 1988. Since then, the school has graduated more than 600 creators, authors and comedians, including many of the great contemporary names in Quebec humour. Some have even exported their talent to Europe.

Among the eleven nations present in the province of Quebec, the Mohawks (Kanien'kehá:ka) live near Montreal, in Akwesasne and Kahnawake (Montérégie) and Kanesatake (Laurentians). Despite the influence of neighbouring towns, their traditional values remain strong and they manage their education, health and services.

We get lost in this parallel network that runs through a large part of the city. Often invested by the inhabitants, the alleyways are both peaceful and full of life. You will come across budding hockey players, community vegetable gardens, a few cars fleeing traffic jams, colourful frescoes and sometimes a raccoon.

On sunny days, the famous garage sales (spontaneous sales or garage sales) flourish on the sidewalks and in the streets of the city. It's an opportunity to make great finds, meet the neighbourhood or simply take an informative look to discover the tastes of Montrealers and past fashions.

You are in line to take public transit. Unlike in France, here everyone queues before getting on the bus.

The weather is your main topic of conversation. You are the first to sit shirtless on a terrace as soon as the mercury reaches 10°C in spring... and to put on your best woollen clothes in autumn, with the same 10°C...

You don't get offended when the waiter at the bar is on first-name terms with you... and you return the favour. This familiarity between complete strangers is quite usual, especially between people of more or less the same age, and it must be admitted that it plays a lot in the relaxed atmosphere that reigns here.

It takes less than 10 seconds to calculate the tip you'll leave in a restaurant or bar.

You have mastered the art of orientation according to the four cardinal points "à la montréalaise".

Other destinations nearby Montreal