Egyptian history is incredibly rich and a visit to Cairo offers a delightful journey thousands of years back in time. In this sand-coloured megalopolis, the experiences offered are diverse and varied. One discovers religious monuments of great beauty, strolls through the souks to discover local handicrafts and strolls through the museums to better understand the complexity of its history and the multiplicity of its influences. The Egyptian capital is hectic, often noisy, but whether you walk along the banks of the Nile or wander through the alleys of its various districts, the least that can be said is that you are fascinated at every moment. Here are the must-sees of Cairo 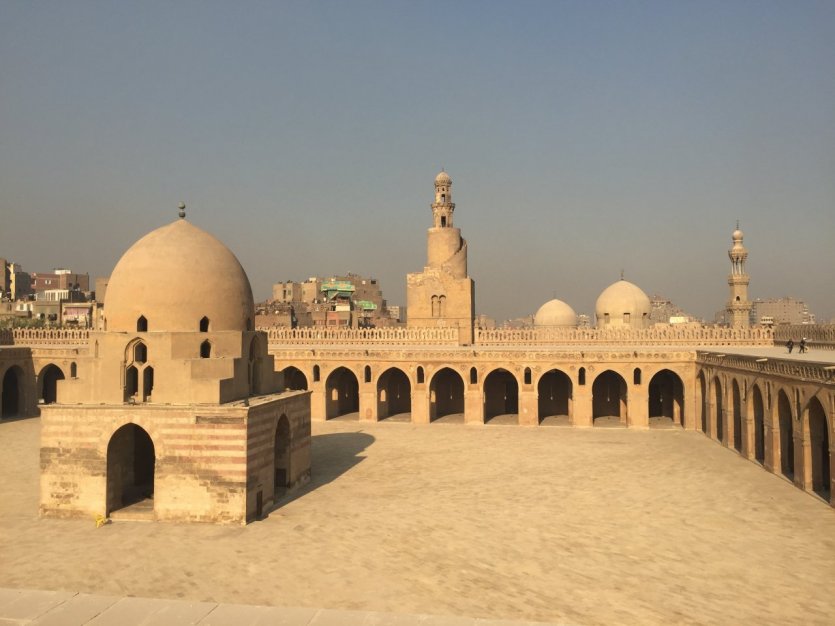 A stroll through the Egyptian Museum in Cairo

One of the first things to do in Cairo is to go to Tahrir Square to visit the Egyptian Museum. It was designed to house the antiquities of ancient Egypt, and inside is the largest collection of archaeological antiquities of the time. A figure to make one dizzy, this exceptional cultural place houses some 120,000 antiquities and among these jewels are the treasures of Tutankhamun's tomb, statues of kings, queens and deities, jewels and a large number of mummies that have been discovered since the 19th century. One should also take time before entering the interior to contemplate the exterior of the monument, an imposing neoclassical-style building 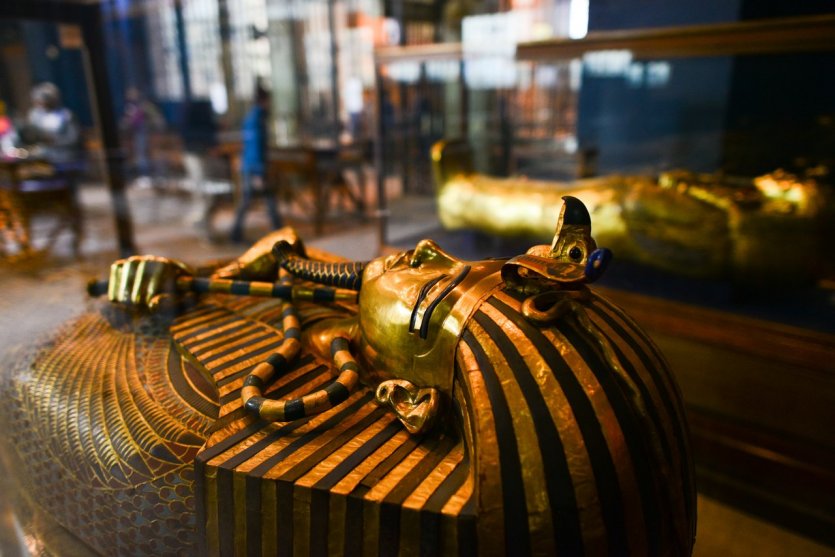 Cairo's citadel, also known as the Citadel of Saladin after its founder, is proudly perched on a rocky spur. It dominates the Egyptian capital and was the residence of various governors of Egypt who built palaces there from the 12th century, each more impressive than the last. Its present appearance is due to an important figure, Muhammad Ali, who had the palaces destroyed, civil buildings constructed and the walls partly rebuilt. A walk inside the citadel is an opportunity to see some superb monuments, including the Mohammed Ali Mosque, the Gawhara Palace, and a wide range of museums, including the Police Museum and the National Military Museum. From this part of the city located on the heights, the view of Cairo is sublime and one realizes how well the city of a thousand minarets bears its name 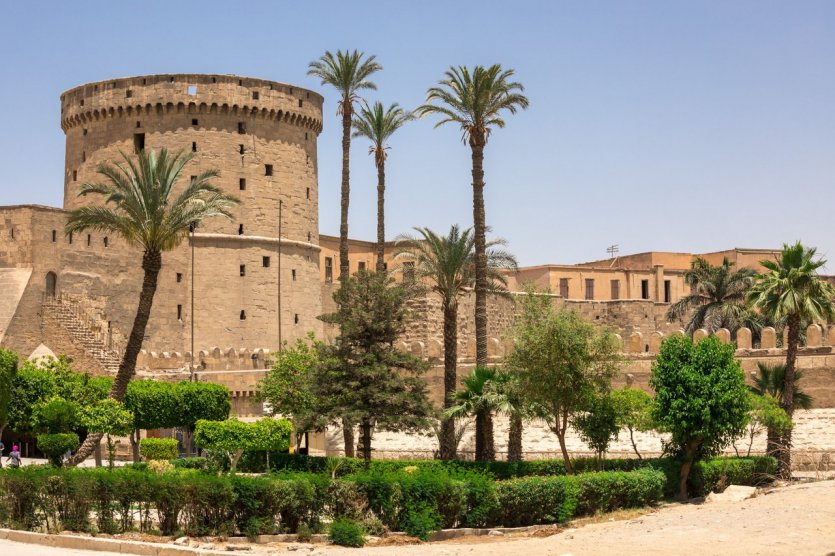 Passing inside the fortress of Saladin, one should not miss to go and see the sublime Mohammed Ali mosque. It was ordered by Mohammed Ali himself and was built between 1830 and 1857. Its architecture is that of the Ottoman mosques, and the influence of the new mosque in Istanbul can be recognized. Its floor is rectangular and a large central dome is surrounded by different half-domes. One must also take the time to linger on its two minarets. Once its external splendour has been admired, it is the central courtyard that catches the eye, with the presence of a clock donated by Louis Philippe, in gratitude for the gift of the obelisk that can be found today on the Place de la Concorde in Paris 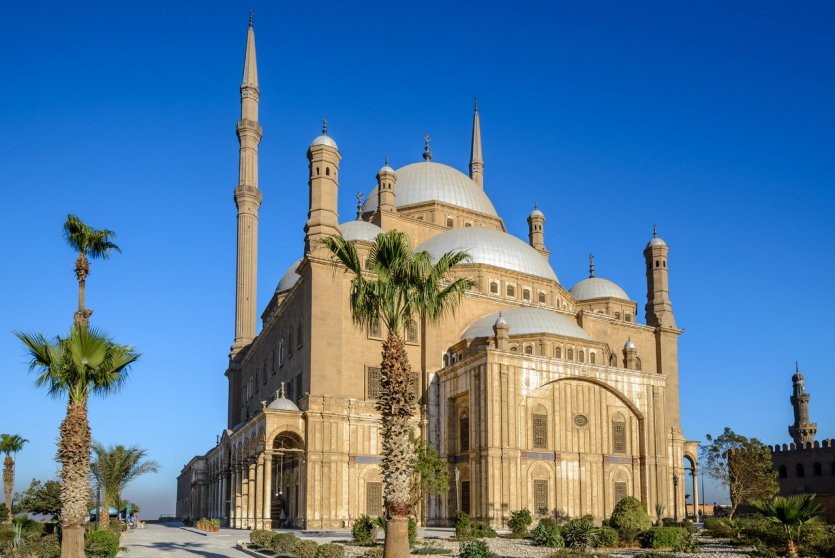 Go to see the Hanging Church

Discovering places of worship is a fascinating activity in Cairo. In the Coptic quarter of Old Cairo, El Moallaqa, also known as the Hanging Church since it was built on the walls of the Roman fort of Babylon, is one of the oldest Coptic churches in the Egyptian capital. Once you climb the stairs that lead to the interior, you can contemplate the smallest details and especially the 13 splendid pillars that represent Jesus and his 12 apostles. This church, astonishing for its location and magnificent for the details that make up its exterior and interior architecture, is a beloved place for the Christians of Cairo 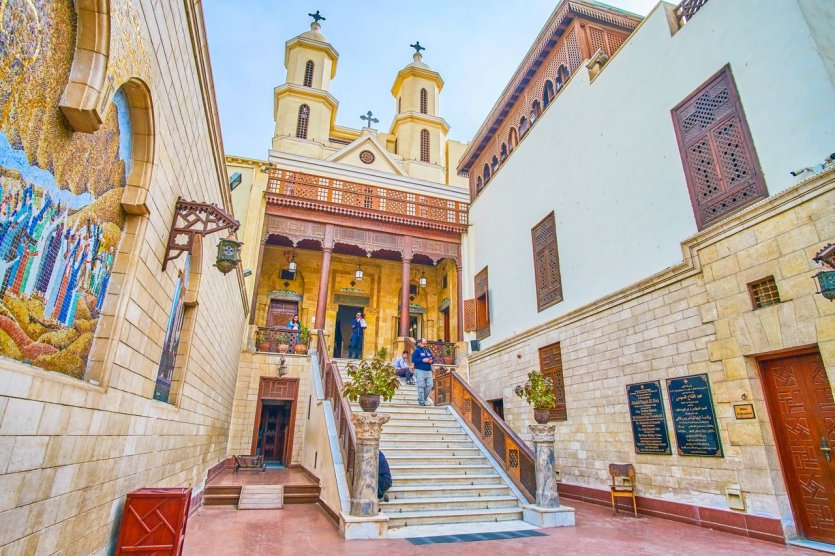 Stroll to the Museum of Islamic Art in Cairo

The Museum of Islamic Art in Cairo is a neo-Arabic style building that was built in 1903 to house the Islamic art objects that were collected by Franz Pasha, a German engineer. For the interior design, a French designer named Adrien Gardère was at work. There are 25 light-filled rooms in which several thousand objects from all over the Muslim world, from Egypt of course, but also from Iran, North Africa and Syria, are presented to visitors. Among the most beautiful objects not to be missed under any circumstances is the oldest Islamic dinar known to date, dating from the year 697, and a gold inlaid key to the central building of the Great Mosque of Mecca 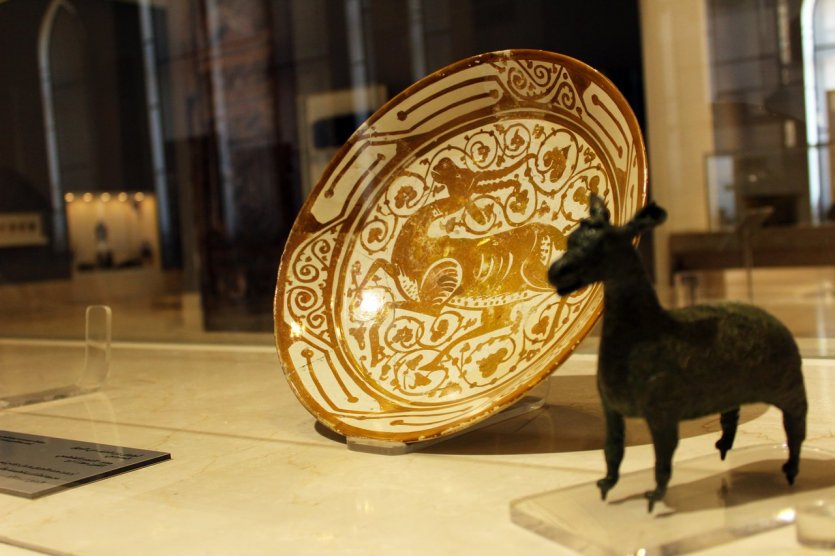 Going to see the House of Gayer Anderson

John Gayer-Anderson (1881-1945), was an English civil servant with a passion for Islamic culture. In the course of his travels, he collected an important collection of objects and furniture. In the 19th century he acquired the two 17th-century houses to live in, and they now form a museum that fascinates with the beauty of the interior decoration, which includes oriental objects, tapestries, ceramics, textiles, copperware, and a number of European and Chinese paintings. The furniture is a perfect reflection of the Ottoman influence. A visit to this museum allows one to plunge into the heart of Islamic art and before entering, one should also be surprised by the beauty of the closed wooden balconies that seem to be emerging from the walls 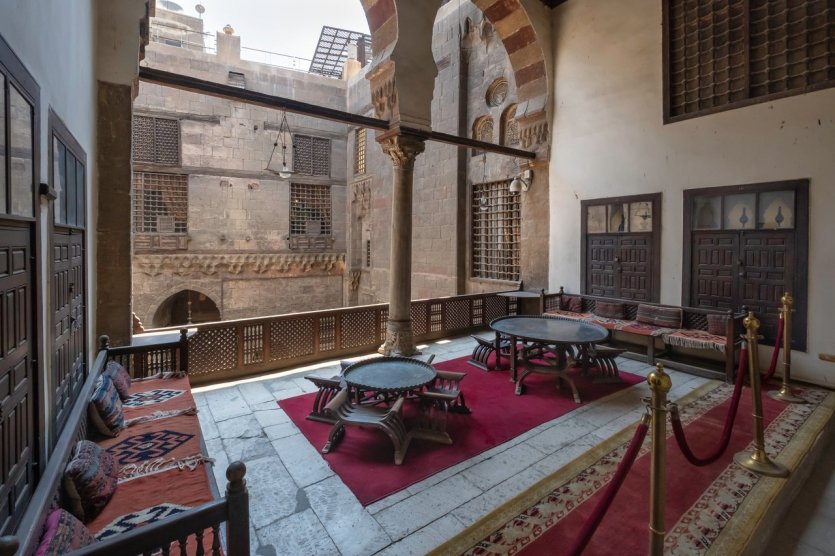 An expedition to the great souk of Cairo

Khân al-Khalili, surrounded by the mosques of al-Husayn and al-Azhar, is considered to be the oldest suq in Cairo. It is a must-see place in the Egyptian capital to soak up the warm and lively atmosphere of the eastern souks. In a colourful and fragrant atmosphere, you will find objects that shine with a thousand lights, hand-made carpets, perfumes, antiques and also spices to enhance recipes. During some passages, you can still see the Mameluk architectural style, with vaulted ceilings and large arcades. One thing is sure, you don't need to be a shopper to enjoy strolling through this souk where it is pleasant to get lost for hours 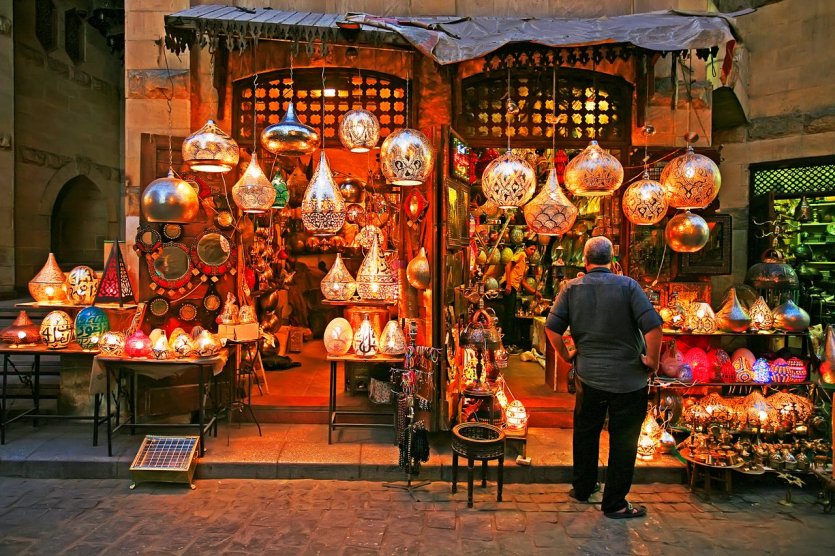 It was on the orders of Sultan Hassan that this superb mosque was built in the 14th century. It is one of the most important Islamic monuments in the world and a jewel of Mamluk architecture. Built in stone, it has a 68-metre high minaret and was designed to function as a madrassa, i.e. a school where Islam is taught. In addition to being surprised by its imposing dimensions, one should not fail to contemplate its paved inner courtyard, its magnificent ablution fountain, before going inside to discover other priceless splendours 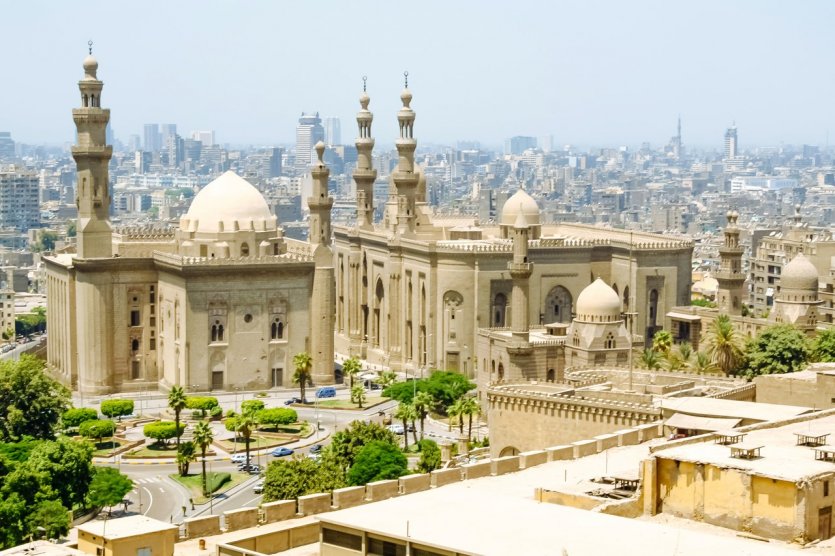 A visit to the Coptic Museum in Cairo

This museum is quite simply the richest in the world in Coptic art. It retraces the historical events of Christianity in Egypt through different pieces that are exhibited in 12 different sections and in a chronological manner. On the different floors, you will discover wooden and glass frescoes, followed by collections of tapestries, ivory and metal manuscripts. Then come the objects of daily life, including combs, jewellery, decorated crosses and lamps. All of these works perfectly reflect the way in which Egyptian art is varied, complete and of great beauty 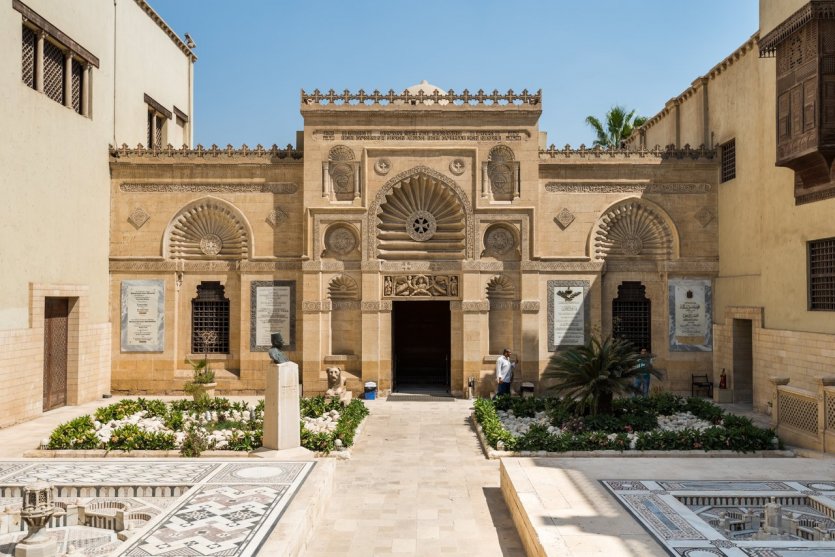 A cruise on the Nile

The Nile is a mythical river and is inevitably one of Cairo's innumerable riches. At the end of the day, you should not fail to board a boat to be able to contemplate the city from the waves. Have fun spotting the main monuments, treat yourself to an Egyptian-flavoured meal and let yourself be lulled by the river's movements. And then don't miss the sunset, whose diminishing rays cause remarkable changes in colour on the Egyptian capital, a city with thousand-year-old buildings that leave their mark on the minds of the people. 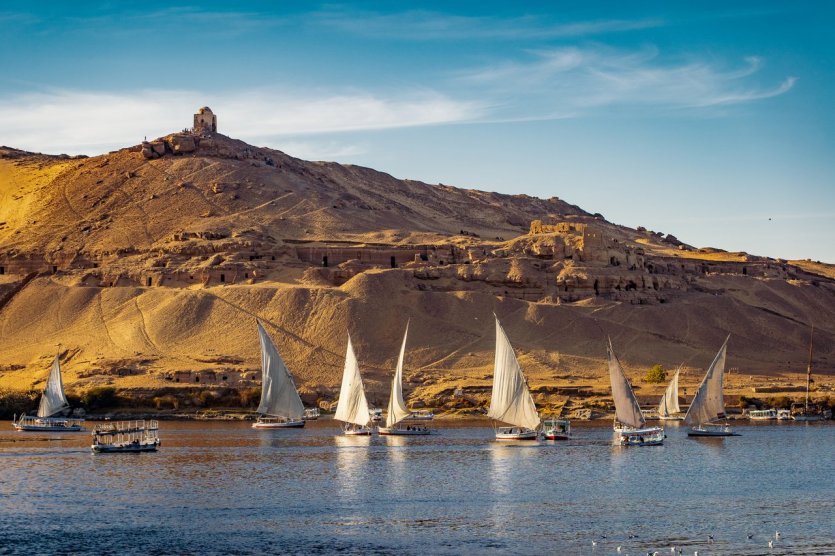 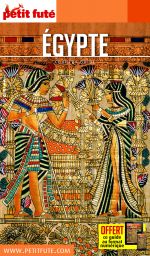 2020 is approaching, the opportunity for us to share with you our travel tips for this year! Universal exhibition, ...
Read the article

A change of scenery, captivating and mysterious, this is how the African continent could be described. It has always ...
Read the article

The most beautiful villages of France punctuate many roads in France by their remarkable beauty. They are the witnesses ...
Read the article
To be read next:
Brussels' must-see attractions
The Essentials of Brussels
Albania's must-haves
The musts of the Normandy region
Dublin's must-sees
Sri Lanka's must-haves
St. Petersburg's must-see attractions
The Basics of St Petersburg
Northern Thailand's must-sees
Review