The "Journey to Egypt" has a mystical side to it. Since the 15th century, it has been an essential adventure to increase your knowledge but also to confront legend with reality. So it is always the case with the visitor who tramples on the arable land of the Delta, the silty banks of the Nile, the burning sand of the country's deserts. The Egyptian people have just experienced a revolution, having shed their blood to make democracy real. After a period of political turmoil, calm has returned. In the name of the fight against terrorism, hopes for democracy and freedom have failed. History, which has shaped the country for seven millennia, continues its march, inexorably, as the Nile follows its course and gives life to those who drink from it. Sure to be "the mother of the world", Egypt continues to welcome with open arms, all those who wish to discover the land of the Pharaohs, its cities and its wonders: Cairo, Alexandria, the temples of Luxor and Karnak, the pyramid of Kheops... But an Egyptian tourist guide will also be able to advise amateurs to dive in the Red Sea in order to admire, in particular, its coral reef. So, no fear to have; the Egyptians are still as benevolent as ever, eager to make their country known to all those who come here, for its rich heritage, its turquoise waters and white sand, its rosary of oases and its biblical mountains. Come on, it's time to do your "Journey to Egypt"!

What to see, what to do Egypt? 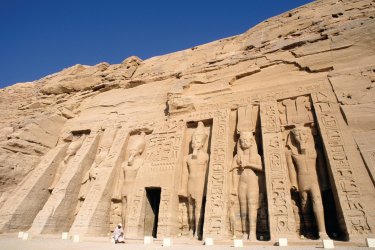 What to visit Egypt ?

When to go Egypt ?

It is not very complicated to know when to go to Egypt: all year round! Although the tourist seasons vary from region to region. In Upper Egypt and Cairo, the high tourist season runs from October to February. Then it starts to get cold. The low season runs from May to September. This is not true for the Mediterranean coast where the high season is from July to September. Apart from the initial choices based on the climate, Egypt can also be visited during Ramadan. Admittedly, the hours of museums and sites are shortened, but the nightlife is incomparable, with concerts organized in the streets, cafés, cultural centers, and Ramadan tents that welcome musicians until 4am. Eid celebrations, which are family celebrations and do not give rise to any particular event, should be avoided. The high season begins in October and ends in March. The low season begins in April and ends in September.

Due to the Covid-19 pandemic, entry and travel restrictions may apply Egypt. Remember to visit the site of the Ministry of Foreign Affairs before you leave for the latest information
Practical information for travel Egypt
Formalities Budget Horaires Getting around Gastronomy

Egypt is a vast country. It is " Oum ed-Dounia " (the mother of the world); the one that Isis will walk through to find the scattered pieces of her sweet Osiris? A long amorous quest, like that of the traveller touched by Egypt before having trodden the ground, and who, once he has tasted the water of the Nile, will come back to it, a second time, and then often? It is thus with modesty that one must undertake his "journey in Egypt", and take the time to discover the country, when one can. Great civilizations have shone on these varied lands; the profile of Pharaoh wearing the double crown of Upper and Lower Egypt always projects its magnificence on the country. It is dense, but one also takes the time to feel the country at the seven thousand-year-old rhythm of its civilizations, whose inhabitants today are the perfect example of serenity in the face of time: everything flows, like the Nile, life, death, and then afterwards...

The best of Egypt

How to go Egypt

Flying is the best way to get to Egypt. While most airline tickets are sold for Cairo, there are seven airports in the country

Many organized trips are available to visit Egypt. Cruises on the Nile are of course the most popular trips. But auto-tours are also available. Finally, thematic stays, such as "diving" stays are also possible in the Red Sea.

Almost any means is good to get around on the spot. In airplanes, the domestic service works quite well. On the water (on the Nile, then), there are two ways: the sailboat and the cruise ship. On the road, bus journeys are often very efficient; just like train journeys. Driving by car, on the other hand, is... sporty and confusing, the daily rules of the Egyptians having nothing to do with ours!

The profile of Pharaoh wearing the double crown of Upper and Lower Egypt still projects its magnificence on the country. Great civilizations have shone on these varied lands. It is dense, but you also take the time to feel the country at the seven thousand year old rhythm of its civilizations, whose inhabitants today are the perfect example of serenity in the face of time: everything flows, like the Nile, the creative and nourishing river that has fed the country for thousands of years. From the depths of the Red Sea to the oases of the desert, meet a wise and peaceful people: their religion, their values, their different heritages - architectural, musical, culinary. Egypt invites you to discover its thousand and one facets. A long quest for love, like that of the traveller who is touched by Egyptomania before he has set foot on the ground and, once he has tasted the water of the Nile, will return a second time, and then often...

Diving in the Red Sea

Cruise on the Nile

They populate city streets and country roads. Many cats and dogs roam around restaurants, more or less insistently asking people at tables to share their meals. They are very rarely aggressive, although fights between rival gangs can sometimes suggest otherwise.

This tip, most often expected as a reward for a service rendered, does not only apply to tourists. The economic situation and the persistence of informal work do not guarantee a decent wage for a large number of workers. Low wages and the rising cost of living therefore make baksheesh necessary.

More than just a drink, qahwa is eaten in a group, accompanied by a shisha. Finely ground and boiled in a kanaka, qahwa can be drunk sada (no sugar), masbout (medium dose) or sokkar ziyada (lots of sugar), it is always flavoured with cardamom. Coffee is also a place to discuss politics (with caution).

The place of superstitions is not negligible in the daily life of the Egyptians. Against the jinns or evil spirits, Father Saaman, a Coptic priest, advocated exorcism. Still today, his church of Moqqattam is attended every week by hundreds of Christians and Muslims wanting to appease their souls.

If a passer-by sitting on a café terrace points to the glass of water in front of you, answer " Etfaddal! "(please), which will invite him to drink it. Water is still a good thing to be had. And there are still a few earthenware jugs in the streets to give water to the needy

Foul is the basis of the Egyptians' diet. Simmer for a few hours in a tight-necked pot, add olive oil, fried eggs, basterma (dried beef) or tahina (sesame cream). Very nutritious - because it is high in vegetable protein - it replaces meat, which is increasingly expensive.

Shoe shiners, seed sellers or car tyre dealers: in Egypt, jobs are offered to the eye along the streets. Everyone is active in the streets of the souks. Sweet potato sellers and their mobile ovens fill the streets with their warm smell. Small trades are legion and can sometimes surprise!

Egyptian cities don't die out once the sun goes down. So there's nothing to stop you from going to the hairdresser at 9pm, finding a birthday present after dinner or shopping late at night. Cairo never dozes off completely, except on Friday mornings before prayer, when it is quiet

Bread is the basis of the Egyptian diet. Nothing expresses its importance better than its translation into the Egyptian dialect: 'aish, which also means "life". Egyptian bread, known as 'aish baladi , is a round, flat wafer. It is known for its nutritional qualities. So do not hesitate to walk around to taste it

Egypt's history is marked by many revolutionary episodes: well before 2011, the 1919 revolution helped to put an end to English domination, and the 1952 coup d'etat brought down the monarchy and put Nasser at the head of the country. Persistent structural problems do not rule out the possibility of new uprisings.

It is no exaggeration to say that tourism was invented for Egypt. The joint development of Egyptology and Orientalism in the 19th century contributed greatly to the development of travel to lands previously known only to traders. At the end of the 20th century, the development of mass tourism will transform the country and its infrastructure.

The surface area of the cities is constantly increasing and they are buildings that now extend over what were agricultural fields a few years ago. Yet many laws exist. But corruption and negligence allow buyers to circumvent them. A major problem that the authorities do not seem to have taken the measure of.

You use the term "maalich"(it's okay) in an abusive way. Both when you fail to crush someone and when you pass in front of a customer who is standing in line

You always carry your wooden tip for smoking shisha in popular cafés!

At breakfast, you eat foul (beans), which you buy in one of the vans ('arabiyât foul) parked in the streets, which offer sandwiches or plates to eat on the spot

You alwayscarry a jacket and a scarf with you, even when it gets hot, even at 45 °C, because the air-conditioning in the cafes and transport is 16 °C

You put 3 or even 4 teaspoons of sugar in your tea, and if the sugar runs out, the whole country goes into a major crisis