Located on the eastern part of the Scandinavian peninsula, Sweden is a kingdom bordering the Baltic Sea. A magnificent country, made up of thousands of coastal islands, hundreds of small and large lakes, vast northern forests and mountains. Carried by the archipelago of its capital Stockholm, a royal city that is easy to walk through, Sweden has a thousand and one beauties and secrets. Dalarna, a mountainous region in central Sweden, is worth mentioning. We will visit the archipelago of Bohuslän (a thousand islands!) which goes from Gothenburg to the Norwegian border. In the south, there are the sunny beaches of Skåne, the agricultural properties, the peaceful plains, the Österlen art circuit and the multicultural city of Malmö, connected by the Öresund bridge to the Danish capital, Copenhagen. Don't miss the Kingdom of Glass and Crystal before falling under the spell of the Northwest, the medieval alleys of Kalmar, County Götland and Farö. Your tour guide will remind you that Sweden is a land of legends, occupied by the Lapps and the Sami in the far north. As a model of democracy, Sweden is also an exemplary ecological destination where respect for nature is rooted in history and daily life. So don't be impressed by this Nordic country where the day and night, thanks to a sometimes polar situation, don't have the same flavor as elsewhere...

What to see, what to do Sweden? 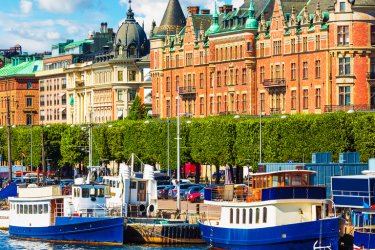 What to visit Sweden ?

When to go Sweden ?

May to August: outdoor activities (many are closed before mid-May) are plentiful at this time of year. July, at the heart of the Swedish school holidays, is the busiest month. It is the time of festivals, traditional activities in open-air museums; it is also the warmest month and during which the sun shines the longest (in this case, all the time: from midnight to... midnight in the north). We can also mention the great medieval week on the island of Gotland (first half of August).

December to March: Snow covers the whole of northern Sweden (and the whole country in some years). This is the period of legendary cross-country ski races like the Vasaloppet and its 90 km in classic style that take place over a week at the end of February. Ideal for visiting Lapland, seeing Kiruna's ice hotel, enjoying Christmas markets, winter sports, sleigh rides and saunas.

Due to the Covid-19 pandemic, entry and travel restrictions may apply Sweden. Remember to visit the site of the Ministry of Foreign Affairs before you leave for the latest information
Practical information for travel Sweden
Formalities Budget Horaires Getting around Gastronomy

Stockholm, in the capital of design

A long weekend in the archipelago of the Swedish capital

A weekend in Gothenburg

How to go Sweden

Sweden is surely one of the safest destinations in the world, so travelling alone is very simple. Fluency in English is sufficient to cope with daily life and sightseeing, and it is relatively easy to get around. We quickly adapt to local customs and the kindness of the inhabitants makes the stay easier.

There are many trips and tours organised to visit Sweden. You can opt for long stays (two or three weeks), short stays (three days in Stockholm for example), immersion stays with the Sami population, ecotourism stays, tours in the footsteps of the Vikings... In short, there will be plenty of options and you will have plenty of time to choose a stay that suits your wishes!

Getting around Sweden is easy and all means of transport exist, according to your desires, your time and your budget: plane, train, bus, boat, car. The roads (rails, roads, inland lines) are very developed (with the possible exception of the northern part of the country, which is more difficult to access). In large cities, the public transport network is generally dense. But in this ecological country, pedestrians and cyclists have their place!

In order to understand the success of the Swedish model and the Swedish way of life, it is necessary to discover the country beyond the clichés and prejudices. To explore Swedish nature is to realize that it is a source of strength and inspiration for the Swedes. This relationship determines their ecological commitment and their efforts to preserve the fauna and flora. Similarly, it is impossible to understand the Swedish way of life, their discretion, reserve, but also their resistance and dedication, without studying the rhythm of the seasons, the harshness of the winters, the constant regeneration of nature. Moreover, to delve into the history of Sweden is to understand that the country, in the heart of Scandinavia, is the reflection of diverse and ancient influences. This allows us to better understand Sweden's cultural contributions to the world, its quest for peace and its search for social harmony.

The famous vodka brand is made in Sweden. Its global marketing success has made the brand, which originated in Skåne, the world's third-largest selling alcohol brand. Nevertheless, Absolut vodka cultivates the paradox of being a product that is more expensive in its country of origin than in most countries where it is exported!

In Sweden, there are no private beaches and swimming is completely free. You have a wide choice of sandy or rocky beaches all along the Swedish coast. In the east, on the Baltic, the water is colder and less salty than on the west coast. In Stockholm, you can even enjoy a swim on one of the islands in the city centre.

The Swede's nature is calm and somewhat aloof, hence his often discreet body expression, which may seem surprisingly sober on his first visit to Sweden. The natural calm of the Swedes has its advantage on the roads where such civic-mindedness could disturb French motorists on holiday!

Citizens of Europe, you should know that the Swedish model of gender equality is leading the way. In fact, half of Sweden's ministers are women and the country is known for its initiatives in this area. Furthermore, from a very early age, children are treated as unique and equal individuals and not according to their gender; equality!

In Sweden, they reinvent the colours of nature for all kinds of furniture. So, it's wool and raw wood with modern materials, soft colours on warm colours, old and new, a mix that only the Scandinavians seem to master to perfection, for the happiness of their cosy homes.

This word is generally translated as "coffee", but its meaning includes the drink itself, the coffee break, the four hours... In short, the fika is a privileged moment, caffeinated, and more if affinities: cakes, biscuits, pies or sandwiches! In the cities, there are cafés everywhere, the temples of this sacred time

The traditional kanelbullar is an essential part of Swedish pastry, and when baked it will fill your home with the scent of the Orient. This small rolled bun is a symbol, light, buttery and soft, sprinkled with cinnamon and sugar pearls. There is also a version with cardamom, just as delicious and refined

In Swedish cities, most people travel by public transport because there are many connections, the vehicles are punctual and, above all, it is environmentally friendly! It seems strange to them to take the car for a short trip in the city: because it is polluting but also because parking is expensive

The ombudsmen have the task of representing individual citizens in their conflictual relations with public institutions. They also exercise control over magistrates, civil servants and the military. They also denounce any abuse of power. More than 3,000 complaints are sent to them each year

Skål is the Swedish equivalent of "Cheers! "but much more sophisticated. Before practising it, it would be wise to practice in front of a mirror! At the table, look at a person of your choice, raise your glass and say the word loudly before toasting, even with strangers! A good opportunity to make new friends.

This spice is widespread in Sweden because it is very popular, especially when it comes to traditional baked goods. At Christmas time, for example, Lussekatter, the "S" shaped St. Lucia buns with orange powder mixed into the dough, are devoured by the locals. Another favourite spice in the country is cardamom.

It is true that they are not very talkative, these Swedes, and that they are often introverted and prefer to solve problems with calm and equanimity, or even simply with silence. But as it is, they can sometimes be overly enthusiastic. Toss them a topic that interests them and you will be rewarded.

You enjoy a snack of Swedish toast(knäckebröd), topped with herbed cheese spread, a slice of smoked salmon and a squeeze of lemon

You hunt for the northern lights in Lapland

Enjoy the benefits of a Swedish massage, a holistic approach to well-being

You take off your shoes when you enter a host's home. You notice that the Swedes wear slippers or socks inside

You say hello by raising your hand or giving a hug, a quick but warm embrace.

You trust your GPS when it tells you that it will take 4 hours to drive 180 km (especially in winter)... It's right!