Stockholm is a complex, yet fabulously attractive capital. Situated between Lake Mälar and the Baltic Sea, made up of fourteen islands, the guide to visiting Stockholm tells us about the perfect mix for your stay, between innovation, high technology (the city is home to the headquarters of Ericsson, for example) and history. Its historical centre, Gamla Stan, is spread over the Stockholm Archipelago with the islands of Stadsholmen, Riddarholmen and Helgeandsholmen, and is home to numerous museums and monuments (the Royal Palace, the Nobel Museum, the Museum of Modern Art...). The island of Djurgården, further east, exhibits the Vasa, Nordic, and ABBA museums, as well as the Gröna Lun amusement park. The talent of Swedish artists and designers adorns the streets of the capital with innovative shops offering objects that combine tradition and modernity. A guide to discover a very dynamic city during your trip to Sweden. The Swedish capital sees every year new good addresses appearing: excursions, restaurants, galleries, unusual festivals, parks, places to stroll... Very pleasant whether it is solo or on a guided tour. However, the Stockholmers have understood it well (as the Swedes do), the open air nature that surrounds it is their most beautiful treasure and for this reason they have chosen to adopt a more thoughtful, more responsible consumption, which makes it one of the most ecological capitals of Europe. Stockholm thus offers all its visitors the luxury of being able to juggle cultural discoveries and rejuvenation, especially outside the city like Swedish Lapland where you can observe the Northern Lights, a colourful jewel!

What to see, what to do Stockholm? 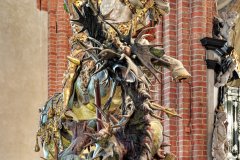 What to visit Stockholm ?

When to go Stockholm ?

In Stockholm, the main tourist season lasts from mid-June to mid-August, when the weather is at its best and the days last the longest. This is the busiest season! The Christmas season also attracts crowds of tourists eager to experience the intimate, illuminated atmosphere of the Christmas markets and snow-covered streets. That said, sometimes there is almost no snow and it's more like a rainy holiday season for unlucky tourists. The low tourist season lasts from September to December and from January to June, which are often dark and sad months. But Stockholm is a city that, as soon as the sun appears, is superb to visit, especially when it is not invaded by tourists and the local population lives at its normal pace.

Due to the Covid-19 pandemic, entry and travel restrictions may apply Stockholm. Remember to visit the site of the Ministry of Foreign Affairs before you leave for the latest information
Practical information for travel Stockholm
Formalities Budget Horaires Getting around Gastronomy

Stockholm, in the capital of design

A long weekend in the archipelago of the Swedish capital

How to go Stockholm

Stockholm, despite its large surface area, is easily visited alone. On the security side, first of all, it is a very safe city, and the Swedes are courteous (many understand English). Remember to book your accommodation in advance (especially in high season), and let yourself be wandered around the city.

Many tour operators have offers for sightseeing in Stockholm. The most frequent ones concern escapades (3 days and 2 nights or 4 days and 3 nights) and long weekends. In Stockholm, since the location is suitable, there are quite a lot of cultural trips, but the prices are higher. That said, apart from more economical packages, it is better to visit Stockholm independently.

Bus and metro services are very efficient for the city centre, as well as the suburban train service (Pendeltåg) to reach the more remote areas. The commuter train network is divided into three main lines with the indexes J35, J36 and J37. In addition, there are express lines J33 and J34. The organising authority that manages Stockholm County's public transport network is called Storstockholms Lokaltrafik AB or SL. Otherwise, the city centre is easily accessible on foot or by bike.

Where to go to see the most beautiful Christmas markets?

This city of democracy, which is the pride of the Swedes, is the royal capital of its parliamentary monarchy, which offers a unique democratic model with a nationalism that celebrates both ancient customs and the future. Indeed, as the center of the famous Nobel Prize, a cultural institution supporting scientific, literary and social progress worldwide, Stockholm occupies a major international position despite its small size and unique local folklore. Here you can find the remains of the Viking peoples as well as one of the largest gay pride parades in Europe. Any visitor to Stockholm will have an intimate encounter with the local customs, through the fika breaks and annual festivities, its untamed nature and its architecture that charms everyone. Moreover, it is a small but relaxed capital city, which can be crossed on foot in a little over an hour!

Stockholm is a true design capital, and you can feel it just by walking through its streets. The style of dress, the aesthetics of the stores and cafes or restaurants, the architecture, all the details and colors, mark a standard of taste for good things that only the Scandinavians seem to master to perfection

Located between Lake Mälaren and the Baltic Sea, Stockholm is surrounded by water. Navigating in this picturesque city consists of moving between different islands, staying in constant contact with the water, either on foot or by boat. The city contains about 30 swimming spots, some of them less than a kilometer from the city center!

Fika means "coffee", an expression meaning a coffee break during the day, accompanied by some pastries and a few friends. A social practice that warms up during the long, cold, dark winters. Stockholm is full of perfect destinations for fika breaks where you can get to know this folkloric ritual

The Christmas season in Sweden is a real festive time. During the festive season, you can enjoy a julbord, or "Christmas buffet", which is offered in most restaurants from mid-December. This meal offers the best of Swedish cuisine, including meatballs, salmon, herring, and snaps!

Meatballs called köttbullar filled with lingon sauce: this assortment of ingredients can be found on every menu in Swedish restaurants. A true delicacy of Swedish gastronomy, lingonberry jam is widely used to accompany all kinds of dishes, from meatballs to pancakes or black pudding!

Throughout the year, life in Stockholm depends on light. When there is little light, the city glows with candles and stars in the windows of the buildings. This is reflected in the Scandinavian paintings, which wonderfully master the nuances of light and color typical of these Nordic landscapes. The sunsets and sunrises are absolutely sublime.

Swedes stay in contact with water all year round. When it's too cold, it's time to warm up in a sauna, then dig a hole in the frozen water, soak in it, and off you go! A way that not everyone practices, but the sauna is an almost daily activity for some in winter.

Light rules the rhythm of Swedish life. Each year, the summer and winter solstices are dates that mark local calendars. The summer solstice is one of the most celebrated folk festivals in Sweden, honoring light and the sun as it begins its long decline. Beware, in winter the sun sets around 3pm!

Alcohol distilled from potatoes or cereals, snaps is the national alcohol as vodka is for the Russians or wine for the French. Snaps is drunk as an accompaniment to meals in the form of a shot, i.e. in small doses and drunk in one go. Also known as aquavit, which is a type of snaps.

Small round boxes from which the locals take out mysterious packets... They are not packs of cigarettes or tobacco, but snus! This way of consuming nicotine is forbidden in all other EU countries, and consists in slipping a nicotine sachet between the lip and the gum. A solution to "smoke" inside!

Any alcoholic beverage over 3.5% is sold in state-run stores. Prohibited for people under 20 and sold at prohibitive prices, alcohol in Sweden is up to 50% more expensive than in France! On the other hand, you can be 18 years old or more to buy alcohol in restaurants. The stores close at 3pm on Saturdays and are closed on Sundays.

Welcome to the kingdom of the tall blond men with blue eyes, a land of Vikings since the year 800! The Stockholm region was populated and ruled by the Vikings, including the site of Birka which can be visited today. The Viking Museum in Stockholm also offers the opportunity to immerse yourself in the history of this famous conquering and exploring people.

You use snus all day long. This powdered tobacco in a pouch has been common practice since the 19th century and is more widely consumed than cigarettes. It is often allowed indoors and outdoors

You have a work break for fika . In France, it is the "pause clope" and in Sweden it is the fika break at the office! Coffee and pastries in the afternoon to discuss with colleagues ..

You mainly wear black. Black is the most recurrent clothing color for Stockholmers, which is incidentally married with touches of more vibrant colors: fluorescent green, sky blue, or especially beige.

You accompany every meal withknäckebröd bread. This crusty bread is served in different thicknesses and flavors, with entire supermarket shelves devoted to it

You go sledding in the park as soon as the snow falls. The parks are filled with the sounds of children sledding up and down the snowy hills!

Other destinations nearby Stockholm