Nestled in the heart of the Pyrenees between its two great neighbours Spain and France, the Principality of Andorra has a strong character, both in its culture and in its gastronomy inspired by French and Spanish cuisine. Every year, more and more French and Spanish people pack their bags to settle in this little paradise of high mountains, with its thousand-year-old history and endless possibilities for outdoor activities, both in summer and winter, including some of the most beautiful walks in the world. During your holiday in Andorra, you can explore the sumptuous Madriu Valley, a UNESCO World Heritage Site, and the snow-covered peaks of the Ordino Pass, but also learn more about the striking architectural heritage of the Andorran parishes, with traditional mountain houses, shepherd's huts and Romanesque churches: Andorra is the ideal destination for a relaxing break. If winter in Andorra is the blessed season for skiing, the regional nature parks stretch between green pastures and majestic Pyrenean reliefs that give rise to ski resorts with magnificent snow cover and are a delight for hiking enthusiasts. Visiting Andorra can also be done in relaxation, you can relax in the magnificent thermal centres of the region. Neither French nor Spanish, thriving both in the snow and in the sun, serene and strong, the small principality of Andorra asserts its character through its incredible panoramic views, its wide open spaces in the middle of nature, and leaves a delighted memory for those who venture there. Fill up on fresh mountain air: Benvinguts a Andorra!

What to see, what to do Andorra? 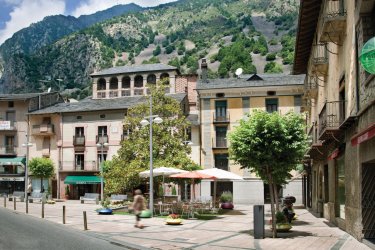 What to visit Andorra ?

When to go Andorra ?

When to go to Andorra? If all seasons are favourable for a trip to this corner of the Pyrenees, in order to enjoy the mountain escapades, the ski season and the summer months are the best times to go to Andorra. From December to April, people come to enjoy the joys of the snow-covered slopes, while from June to September, it is the green slopes that they enjoy. The summer is much less crowded than the winter and hotel prices are falling, and although the tourist offer is reduced in the low season, it is still important. The months of May, June and September ensure tranquillity and good weather. So when should you go to Andorra? All year round!

Due to the Covid-19 pandemic, entry and travel restrictions may apply Andorra. Remember to visit the site of the Ministry of Foreign Affairs before you leave for the latest information
Practical information for travel Andorra
Formalities Budget Horaires Getting around Gastronomy

How to go Andorra

Andorra's proximity to major cities in France and Spain means that you can get there easily thanks to a well-developed transport network. Plane, train, car, coach, you can get organised quickly and easily. For a stay in Andorra, as everywhere else, it is always interesting to book transport and accommodation in advance to take advantage of advantageous rates.

There are agencies specialising in active tourism that know the Principality very well. It is therefore fairly easy to find structures adapted to your expectations, offering packages that generally combine at least transport and accommodation. If you are going to Andorra to enjoy winter sports, some agencies also offer packages including equipment and access to the slopes with a guide.

For those who like to walk, Andorra is particularly pleasant for the diversity of the routes it offers. Whatever city you are in, the short distances will allow you to discover it on foot, from one end to the other, without the need for any means of transport. To travel around the whole area, you can choose to travel by car (your own or a rental car), or by bus.

Shopping in Andorra at the Illa Carlemany shopping centre

Grandvalira: a successful ski holiday for the whole family

Andorra has often been summed up as having ski slopes and tax-free shops, but although these aspects are very real, the Pyrenean principality is also distinguished by its singular history and the architectural legacies associated with it (in particular the countless Romanesque churches that dot the territory), by its breathtaking natural heritage with its ultra-rich ecosystem (from the Madriu valley to the Ordino passes), and also by its mountain gastronomy, with its time-honoured and tasty recipes... Since the middle of the last century, life and villages have changed completely in the Andorran valleys, as the country has moved from an agricultural and industrial economy to an activity largely focused on tourism, mainly winter sports. But the old traditions are still well preserved by the inhabitants of this Pyrenean confetti, making it a unique destination, rustic and modern at the same time.

The parish of Encamp: a multi-faceted stay

Thanks to its thermal waters and well-equipped centres, Andorra has become an ideal destination for a relaxing holiday. Caldea is the place to be and is the largest spa in southern Europe. The majority of the hotels in the principality are equipped with a spa centre

A typical Andorran peasant house without a chimney, built of dry stone, where wheat and livestock were once kept, borda means "hut". Today, typical Andorran farmhouses and gastronomic restaurants are known as bordes. These are the best places to discover Andorran cuisine.

This small piece of mountain land wedged between France and Spain has a very strong Catalan influence. In fact, it is the only place in the world where Catalan is the official national language. But be careful not to mix things up: Andorrans are proud of their Pyrenean identity, so don't tell them they are Catalan!

The Andorran regime is more than ever placed under the sign of tax exemption. Indeed, VAT does not exist, its inhabitants do not know the income tax, and the professional tax and the social charges are minimal. As a result, unemployment is very rare. This extraordinary situation attracts crowds of people who come to shop!

With its magnificent mountains full of natural treasures, Andorra lends itself wonderfully to ecotourism. To make its rich natural heritage accessible while protecting it, the principality has opened nearly twenty ecotourism circuits in recent years, spread throughout its valleys.

From the 17th to the 19th century, the extraction of iron ore, its transformation and marketing were the pillars of the country's economy. This part of the Principality's history has not been forgotten and today there is an "iron route" in the Ordino Valley for those who wish to learn more about this thousand-year-old history.

The parishes are the geographical and administrative boundaries of Andorra. There are seven parishes: Canillo, Encamp, Ordino, La Massana, Andorra la Vella (the most populated), Sant Julià de Lòria and Escaldes-Engordany (the latter has only existed officially since 1978). The town halls are called comuns (comu in the singular).

Andorra is the only country in the world with a political system based on the co-principality. It is a small independent state under the sovereignty of two co-princes: the French head of state and the Bishop of Urgell (Catalonia). In this sense, the status of Andorra is not comparable to that of Monaco (monarchy) and Liechtenstein (principality).

Given its location in the heart of the Pyrenees, the least we can say is that Andorra is above all a country of mountains. The country has no less than 65 peaks! Wherever you are, in the city centre or in a remote village, you will always have views of the mountains, sometimes even from your hotel room

Vast and beautiful stretches of snow, a real white horizon. Andorra's ski resorts guarantee snow from November to April, thanks to their state-of-the-art snow cannons. But beware: while snow is a skier's friend, it can quickly become the sworn enemy of walkers and motorists if they are not properly equipped.

The number of sporting activities on offer in Andorra is vast. Nature lovers can explore the valleys on foot, snowshoes, bicycle or horseback, or go canyoning, fishing or climbing. Snow sports enthusiasts can ski, snowboard or ride a snowmobile down the slopes. A paradise for the hyperactive!

Tobacco from Spain was introduced to Andorra via a cottage industry in the 17th century, and was widely grown. Then, from the 20th century onwards, consumption became widespread, the production chain was mechanised and American blond tobacco won out. Tobacco production is nowadays marginal in the Andorran economy.

You don't want to miss your village's patron saint's day!

You don't forget to include the IGI (4.5% tax) in your restaurant bill

You don't keep a taxi waiting, even if the streets allow it. In Andorra, you rarely double park and only use the hazard lights ... in case of distress. Instead, let the taxi do a lap and wait patiently until it has completed its loop before getting in.

You never go above 2,000 metres without being fully covered. Similarly, you do not hesitate to check the weather forecast every day

You do not venture out in winter, either on foot or by car, to the heights of the parishes without first checking on the access to the site you wish to visit. Many are not accessible because of the snow