In the south of France and on the Spanish border, one foot in the Mediterranean, with the Pyrenees chain as a backdrop, this department has everything for itself! You will find large ski resorts, including Font-Romeu, a resort for top sportsmen and women who come here to train in both summer and winter, natural areas, fine sandy beaches and charming sites, not to mention Perpignan, a capital city with sumptuous buildings and beautiful vitality, particularly around photojournalism. The coastline is home to the Cerbère-Banyuls marine reserve, which is of great biodiversity and interest to scientists, and Collioure, a charming port that attracts artists. The Côte Vermeille aligns the seaside resorts where you can sunbathe: Canet-en-Roussillon, Argelès-sur-Mer, Saint-Cyprien, Le Barcarès. The most sporty ones climb trees in the mountains, canyon in white water, reach the summits by hiking trails. The department also hosts the largest karting circuit in Europe: the Roussillon circuit. The heritage is not to be outdone and includes classified religious buildings. Thermalism is represented, as elsewhere in the Pyrenees, massive with many beneficial springs, with five thermal resorts, including Amélie-les-Bains.

What to see, what to do Pyrénées-Orientales? 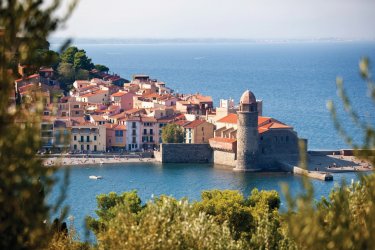 What to visit Pyrénées-Orientales ?

When to go Pyrénées-Orientales ?

When to go to the Pyrénées-Orientales? Although this destination has two high tourist seasons in summer for all outdoor sports and in winter for skiing, it remains pleasant all year round, given the mild climate. However, you will find fewer establishments open during the off-season, the advantage being that prices drop at the same time as tourist numbers and you can enjoy the country at your own pace by meeting more authentic producers and hospitality professionals who have more time to spend with you. In summer, the Côte Vermeille, on the Mediterranean, is a mass tourist destination, with many hotels and campsites, as well as attractions and entertainment. The mountains are also crowded with tourists, but they are not looking for seaside pleasures, rather for outdoor sports activities (hiking, rafting, mountain biking...). The year is punctuated by festivals, encounters and celebrations in winter resorts or seaside resorts, depending on the season. Perpignan offers an annual cultural program that can make your stay attractive in all seasons and especially in September during photojournalism meetings, Visa pour l'image de Perpignan.

The work of Josep Bartolí exhibited at the Rivesaltes Camp Memorial

Music and scenes (dance and theatre)

20% of the agricultural lands are in BIO in the department. The respect of the earth and the living being has the wind in its sails in Catalan Country. In the vineyards, gardens or orchards, the farmers are increasingly turning to the agriculture of tomorrow. Visit our village markets, meet the producers, you will be seduced and converted.

In the last century, the Pyrenees-Orientales were a source of inspiration for painters attracted by light and nature. Collioure, cradle of Fauvism, remembers Matisse and Derain. Céret keeps Picasso in its memory. And Perpignan, the "centre of the world" swears by Dali! Without forgetting the famous artists born in the country like Maillol or Terrus.

Northern Catalonia conceals an inestimable wealth for those who know how to lose themselves inland and look up into the freshness of religious buildings, both large and small. The most emblematic monuments are the priory of Serrabone, the abbeys of Saint Michel de Cuxa and Saint Martin du Canigou or the cloister of Elne.

The massif of Canigó culminates at 2784m of altitude. Visible from far away, this imposing massif has become a symbol for the Catalans who have nicknamed it the sacred mountain. It is at its summit that the flame is rekindled every year at the summer solstice, which will descend to all the villages. It is necessary to go up once in its life because from there, the sight is magnificent.

It is better not to tell a Catalan that his language "is a patois" ! spoken by more than 10 million people (North and South Catalonia) this Romanic language born in the 8th century is the key and unifying element of the Catalan identity. The Catalan culture is present, alive and claimed by a wide range of the population. Visca la terra.

The Catalan coastline stretches over 70 km with an amazing variety of landscapes, two thirds of which are sandy beaches bordered by a vast lagoon between Le Barcarès and Argelès-sur-Mer. Then come the pebble beaches and creeks. All styles of water sports activities are available on the coast: kite surfing, paddle, scuba diving...

Conflent, Vallespir, Cerdagne and Capcir are the mountainous regions of the department and occupy a third of its surface area. The Catalan Pyrenees are not only a delight for hikers, skiers and mountaineers, they also offer a unique ecological diversity from 300 to nearly 3000m of altitude and a great variety of landscapes.

Between January and February 1939, more than 500,000 Spanish refugees crossed the border to escape Franco's regime. It is the retreat that history will remember under the Spanish name of "Retirada&quot;. Today, more than 70 years later, many descendants of exiles live in the department and maintain the memory of this exodus without return.

The Catalan country is a land of rugby. In XV with the team of the USAP champion of France of Pro D2 this year which joins the elite of the Top 14 and the XIII with our valorous Catalan Dragons which dispute with brilliance the championship of England and carry high the colors "Sang et Or" with perhaps this season a second cup of England to the palmarès.

Catalan traditions are just as alive. Going hand in hand with language and culture, they seal the seal of this regional identity. They give rise to numerous events throughout the year. The most famous are the Correfocs, the Gegants, the Castellers or the Sant Jordi celebrations.

How can we talk about military architecture without mentioning Vauban? From north to south and even in the Catalan mountains, the Sun King's architect closed the locks and consolidated the borders with Spain. The state of conservation of the buildings is surprising in Villefranche-de-Conflent, Salses, Mont Louis and at the Fort of Bellegarde in Perthus.

The terraces of the amphitheatre of the Catalan country have been occupied by vines since the Romans. A mosaic of varied terroirs unique in France! The wines of Roussillon are rich, fruity and full-bodied, each one expressing a particular character inspired by the land, the climate and the winemaker. Not forgetting the famous Vins Doux Naturels.

in summer, you go to the beach very early to avoid the flood of tourists

in winter, you also swim sometimes

at the aperitif time, you order tapas

you call "gavatx" anyone who is not from northern Catalonia

you go shopping in Figueres or Barcelona at the weekend

you are a woman, you wear at least one Catalan garnet

you have climbed Canigó, the sacred mountain of the Catalans, at least once in your life

you marvel at living in a country where sea, plain and mountain are united