The Jura is a massif, a department, wines, cheeses and a host of unusual sites. You're going to make the big mistake! A step in the footsteps of Loulle's dinosaurs, another in the Dole Museum of Fine Arts, which takes you from prehistory to contemporary art, a trip to the lakes region, a jump to the remote Baume-les-Messieurs to admire its abbey, its waterfall and its cave, a stopover to discover the moving Toy Museum (Moirans-en-Montagne) which seduces the whole family. And that's not all! There is the delightful house of La Vache qui rit, in Lons-le-Saunier, the Grande Saline de Salins-les-Bains (UNESCO), or the Musée de la Lunette, in Morez, the world cradle of eyewear... You will not miss Arbois, capital of Jura wines, or of course Château-Chalon, a perched jewel, sentinel on the banks of the Revermont and the vineyard. Fief of the famous yellow wine, it is one of the most beautiful villages in France. And we are not done with museums. We should also mention the one of the Boissellerie, located at an altitude of 1,000 metres, in an old sawmill, and dedicated to the wooden cheese box, the new Paul-Émile Victor polar centre, the dynamic Maison du Peuple de Saint-Claude, the Pasteur d'Arbois and Dole houses, the Cascades du Hérisson house... The Jura knows how to highlight its heritage and share its wealth!

What to see, what to do Jura? 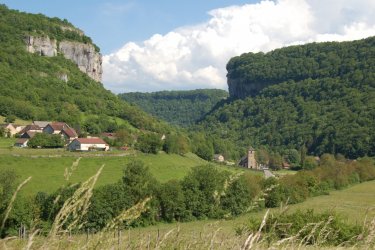 What to visit Jura ?

When to go Jura ?

When to leave? All year round and especially in autumn, which takes on the appearance of an Indian summer here, a mild and sunny period, which highlights the large wooded areas with their bright colours. Magnificent also in this season, the region of the great lakes, the upper Jura and the vineyard, of course. The Dole region is then in effervescence with the grape harvests, major events (gourmet weekend of the Cat perched in Dole, the Biou d'Arbois, Jazz en Revermont) and other gourmet activities. Come during the school holidays with the children for, depending on the season, swimming, canoeing on the lake, visiting the Toy Museum and all the others that do not remain open in their majority. Throughout the year, wine lovers will enjoy the Jura wine route (nearly 80 kilometres) to meet passionate winegrowers, happy to discover and taste the Jura PDO wines: crémant, macvin, côtes-du-jura, château-chalon, l'étoile, arbois and marc du Jura.

In the heart of the Jura vineyard

In the Jura, the vineyards celebrate the Percée du vin jaune

The Jura is a land of human-sized know-how. These heirs of half peasants and half rural craftsmen: furniture and recreational woodworking, horn turners, pipe makers, diamond cutters, watchmakers, founders, ironworkers, glassmakers, potters, enamellers, stone cutters. Some of them are small and medium-sized businesses today.

Comté is the emblematic cheese of Franche-Comté. It was the first AOC cheese in 1958 and AOP in 1996. As its standard-bearer, it has brothers and sisters to discover such as morbier, bleu de Gex, mont d'or, mountain tomme... not forgetting cancoillotte! A gastronomic jewel in fondue or with a Bresse poultry. Among others.

You cannot escape the pleasures of the table in the Comtois region. It is full of excellent rural and urban addresses; starred chefs, but not only. It relies on its regional products such as trout, frogs, poultry, various cured meats (Morteau and Montbéliard sausages in particular), mushrooms and farm dairy products.

The Jura mountains are known as "Santa's other country". Dozens of companies, craftsmen or large manufacturers, of international renown. A speciality initiated in the Middle Ages by the monks of Saint-Claude who were already making toys in "turned wood". Toys have their own museum in Moirans, not forgetting their annual Idéklic festival.

The Jura big cat, also known as the "Lynx boréal" is the mascot of the regional fauna. Protected since 1981, it is one of the endangered species like the capercaillie. They live in the forests with deer, chamois, roe deer, wild boar, badger and many small mammals and birds.

The green of the pastures and the 720,000 ha of forests, the blue of the 33 lakes, waterfalls and streams, the winter white of the mountainous area with its 129 km of ski slopes sum up the portrait of this Jura often called "Little Scotland". This abundant flora is the companion of the County. We can also mention the interest of the coombs, the secluded areas and the peat bogs.

The heritage of the Comtois is infinitely varied. From the Celtic and Roman remains, the traces of the dinosaurs, the lakeside cities to the "Petites cités comtoises de caractère". The region has some of the most beautiful villages in France, such as Mouthier-Haute-Pierre, Ornans, Arc-et-Senans, Pesmes, Beaume-les-Messieurs and Château-Chalon.

A Republic within the Republic. This self-proclaimed micronation in the Haut-Doubs has existed since 1947 under the name of "République du Saugeais" with its flag, its coat of arms and its television! A must if you are allowed to cross the border. It gathers 11 dynamic communes whose president is Mrs Bertin-Pourchet elected for life.

With cross-country skiing and its mythical "Transjurassienne" race, all the disciplines linked to the "lattes" are practicable, without forgetting the biathlon and its champions. In the summer months, too, the marked trails are a joy for hikers, including mountain bikers and horseback riders. Natural cycle paths, in the plain, without crossing a car.

The Jura massif would not be complete without its Swiss counterpart, so much so that these twins separated by the border merge. Same relief and cover, but also the similarity of precision craft activities (including watches), agriculture by recalling that the Swiss cheese makers taught the Comtois how to make Comté cheese. A beautiful country.

With its incredible salt deposit, thermal spas appeared in the region with the fame that followed. In Luxeuil, in Lons-le-Saunier, in Salins-les-Bains. The water of the latter being denser than the Dead Sea. The water is rich in trace elements and is used for therapeutic, fitness, health and beauty cures.

It is described as the smallest of the great vineyards. It has been raising its head since the 1970s. 5 grape varieties and 6 appellations have left a generous range of products. But above all 2 nuggets: the sweet straw wine and the no less rare yellow wine considered as one of the best whites in the world. The Château-Chalon is the undisputed sovereign.

You say "Comtois rends toi... nenni ma foi!"an expression that the people of Dolois would have shouted in 1636, when Dole (capital of the County and dependent on Spain) was besieged by the troops of the Prince of Condé sent by Richelieu.

You say "Arbois wine, the more you drink it, the straighter you go! ». A popular saying to glorify the nectar of the capital of Jura wines. The people of Arbois often add "It's the last glass that goes straight"... "or lightning". It depends.

At the sight of a visitor "who is not from the country", you do not throw yourself into his arms. You analyze him to see if he is worthy of your trust. Once you have been accepted, you are in for the long haul, if not for life. The Comtois is faithful in friendship.

You don't obey to go hunting for the Dahu. A hoax for an absurd mission consisting in hunting in the mountains, stick and bag in hand, a quadruped being with two legs shorter than the other. Some run a long way!