Gironde is the largest department in France. Its Atlantic coast is a huge ribbon of fine sand that runs from Cap-Ferret to Verdon. Sweeped by the waves of the Ocean, the coast offers surfing pros strong sensations, especially in Lacanau Océan. The Landes forest, kingdom of maritime pine, covers the western half of the department. The banks of the Gironde are the domain of the fishermen with the square but also prestigious wine castles and some jewels of Romanesque and Gothic architecture. The Arcachon Basin has managed to preserve its oyster farming traditions intact. It is full of sublime landscapes, often breathtaking like the famous dune of Pilat. At the tip of Grave, in the middle of the ocean, stands the Cordouan lighthouse, the oldest in Europe. In the heart of this territory, Bordeaux is classified as a World Heritage Site by UNESCO. The first port of the kingdom in the 18th century, the city has retained the architectural elegance of that period. The Cité du Vin is the symbol of what has made it so rich for centuries: the vine and its great classified growths. There are 57 appellations from medocs to Saint-Emilion, including gravel, sauternes, etc. The castles of Yquem, Margaux, Mouton Rotschild, Haut-Brion and others are renowned throughout the world. Wine means gastronomy, and the Gironde is not to be outdone with products such as canelés, foie gras or caviar from Aquitaine. It has no less than 14 starred chefs, including Philippe Etchebest, Pierre Gagnaire and Gordon Ramsay, who are featured in all tourist guides.

What to see, what to do Gironde? 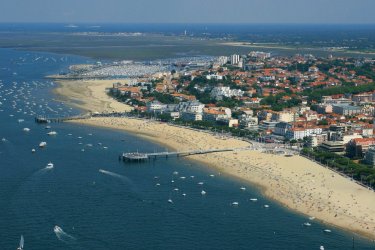 What to visit Gironde ?

When to go Gironde ?

When to go to Gironde? If you want to enjoy the Ocean, July and August are the best months to come to Gironde. On the other hand, the seaside resorts, especially those in the Bassin d'Arcachon, are overflowing with people and prices are soaring in all types of accommodation. If you want peace and quiet, May, June and September are in principle quite mild and all the establishments, closed in low season, are open. It is an ideal time to visit the sites quietly and enjoy the beach from the first rays of the sun. Major events punctuate the festive agenda in Gironde. In Andernos-les Bains, the oyster festival takes place in the second half of July at the same time as the Festival Jazz en liberté. Fest'arts Libourne opens in early August to street arts companies. Every two years in June, Bordeaux celebrates the river with prestigious boats and Bordeaux celebrates wine, an event where all the appellations of Bordeaux wines are discovered on the same site. In November Bordeaux S.O. Good is a festival of art of living and gastronomy hosted by many exceptional chefs. For those who love sport, wine and celebration, at the beginning of September, the Marathon du Médoc passes through the heart of the famous Médoc vineyards and the greatest castles open their doors for a snack or a tasting. In mid-August, Lacanau hosts Lacanau Pro, an international surfing competition with the best surfers in the world. From mid-July to the end of August, lovers of the past will travel to Castillon-la-Bataille to watch a breathtaking show on the Hundred Years' War, featuring stunts and pyrotechnic effects with the participation of over 600 volunteers. Classical music also takes its place with, among others, in July the Estivales de musique en Médoc in Pauillac or the Variations musicales de Saint-Estèphe in August.

Popular all year round for its mild climate, the beauty of its landscapes and its many activities, the Gironde is a first choice destination for slow tourism enthusiasts, sports enthusiasts and lovers of good food. Families enjoy it as much as young couples and retirees. The Bordeaux region being one of the most beautiful regions of the French vineyards, the wine routes are the perfect way to discover the best the area has to offer. But as you will have understood, if the Gironde has so much to offer, it is because there are also a thousand and one ways to organise your stay according to your desires. From the mouth of the estuary to the gateway to the Landes, the Gironde coastline with its ocean beaches, its large lakes and the Arcachon basin is already full of contrasts. The Entre-deux-Mers is a very pleasant area to cycle through, with many beautiful escapes along its quiet roads and in the heart of the bastides.

The lakes, the basin and the ocean beaches of the Gironde in 3 days

Discover the Entre-deux-Mers by bike in 4 days

Reopening of the Pop corn labyrinth in Cestas in Gironde !

Reopening of the Pop corn labyrinth in Cestas in Gironde !

Tous Ô Chais, the open house of the Côtes de Bourg appellation from May ...

"Ho Anqui" is the local "Oh là là" in its popular, even vulgar version. Young and old continue to use this insult with varying degrees of rudeness. And mainly in cars because of all the "wankers" in them! In the same spirit, there is the unavoidable swear word "Anfigueille".

Do you speak Bordelais? Derived from Gascon, bordeluche was in common use a few decades ago. In reality, it's a clever mix of Bordeaux patois combined with expressions from the Landes and Périgord, sprinkled with a few words derived from Occitan. So you might hear: "I've got a load of chocolatines in my pocket".

Established in Bordeaux since 1965, Jacques Pouquet, master pastry chef and chocolate maker, was driven by a strong desire to create a speciality that would evoke and enhance the region. After many experiments, this is how the famous Bouchon was born, a small delicacy with almonds, flavoured with grapes macerated in Fine de Bordeaux.

Crunchy on the outside, melting on the inside, the canelé has a delicious sweet flavor of caramelized vanilla. The origins of the canelé are uncertain, but the story goes that it was born in the Annonciades convent in Bordeaux. Whatever, it is one of the culinary symbols of the city of Bordeaux. You can't get enough of it!

Chocolatine or pain au chocolat? This is the eternal debate! In Gironde, we say chocolatine, a linguistic deformation of the Austrian "Schokoladen". It therefore seems likely that the first term for a pastry filled with chocolate was "chocolatine". And to say "pain au chocolat" (chocolate bread) to designate a viennoiserie, that doesn't make any sense!

Initially intended to house a working class and modest population, the stone stalls are very popular. Built between the Second Empire and the immediate pre-war period, they are the charm of the Bordeaux region. If there is a curtain in front of the entrance doors, it is to create a draught in summer, while preserving intimacy.

"Gavé" is one of the most common words in Bordeluche. Thus, in conversations, it is not uncommon to hear the famous "Gavé bien", which is to be understood as "very good", "really good", "too good". There are countless derivatives of this typical "Gavé". Guaranteed easy to adopt!

A great speciality, lamprey à la bordelaise is prepared in a red wine sauce in the manner of a stew. More delicate and refined than eel, it is a dish much appreciated by delicate palates. Sainte-Terre, the self-proclaimed capital of the lamprey because of its history and its link with fishing, organises the famous Lamprey Festival.

The tidal bore is a wave formed at the mouth of the Gironde and which travels up the river for more than 100 km. It is a unique natural phenomenon in France! Many surfers meet to hope to slide on this breaking wave which can reach 2 m high and move from 15 to 30 km/h. The good season? Between June and October.

Often affixed to the keystone of window or door arches and lintels, or delivering water from fountains, mascarons are invited to architectural decorations. In Bordeaux, they keep in mind the history of the city. The reproduction of African faces refers to the slave trade between the 17th and 19th centuries.

This "pocket" has nothing to do with the one on your pants or jacket. At home, the pocket is the plastic bag at the supermarket! At the bakery, it's the paper bag where you put your chocolate and other buns at Epiphany time. Not to be confused, of course, with the "bag" as a fashion accessory!

With 110,800 hectares of vineyards, 65 appellations, prestigious châteaux and grands crus, the Gironde is undoubtedly a world-renowned wine region. Organized around the rivers Garonne, Dordogne and the Gironde estuary, the Bordeaux vineyards are the leading wine tourism destination in France.

Socially, you can boast that the 100 Years War ended on July 17, 1453 in Castillon-la-Bataille, you know which great chef is in the rock band Chef & the Gang and that rue Sainte-Catherine is the longest pedestrian shopping street in Europe.

When it comes to wine, Cheval Blanc doesn't remind you of Henri IV, but contrary to popular belief, you readily admit that your knowledge of Grands Crus is limited.

In the evening, the paquito is a tradition never forgotten. Moreover, you do not miss any Wine Festival in Bordeaux nor the "Fête des Bœufs Gras" in Bazas (with your beret screwed on your head).

On the Bassin, you have a crush on the Ville d'Hiver in Arcachon and the village of grass in Cap Ferret. You eat your oysters with a crépinette and you know that the Dune Blanche has nothing to do with the Dune du Pilat. In any case, you do not confuse Bassin and Ocean.