A melting pot of cultures, Mauritius is a popular destination for holidaymakers. And for good reason, once the customs have passed, a nap stamped on the passport, the Mauritian joie de vivre quickly won the visitor. Sometimes confusingly kind, Mauritians smile and speak easily. Here we take the time to enjoy the encounters, to enjoy the warmth that defies the seasons and to share the traditional Sunday picnics on the beach, always accompanied by a guitar and wild dancers. No one can remain unmoved by the intoxicating smell of Creole or Indian pots. With a full heart and a full stomach, this Mauritius tourist guide will become your ally in the search for the natural and cultural treasures of Mauritius: markets, museums, ancient mansions, tropical forests, tea plantations, nature reserves, etc. In the west, the fashion is for kitesurfing, swimming with dolphins and climbing Morne Brabant from where you can enjoy a 360° view of the island and the ocean. North of Port-Louis, the historic and bustling capital, the beaches of Trou-aux-Biches and Mont-Choisy are among the most beautiful in the country. Inland, the huge sugar cane fields are dotted with colourful Indian temples. Don't miss the annual ceremonies that take place there and a visit to the village of Chamarel, known for its colored lands, and rich in ecological sanctuaries and other attractions. The eastern coast, more wild, is famous for its paradisiacal islets such as Île aux Cerfs, accessible in a few minutes by boat on a sea with infinite shades of blue. Don't wait any longer, pack your bags and go on a trip to Mauritius!

What to see, what to do Mauritius? 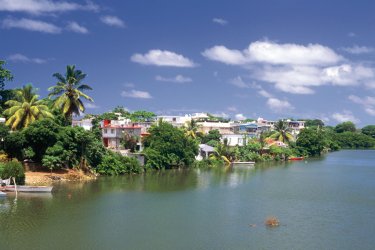 What to visit Mauritius ?

When to go Mauritius ?

Like many destinations in the world, Mauritius has several annual tourist seasons, which are crucial in terms of prices.

The very high season runs from mid-December (around the 20th) to mid-January. Mauritius has made luxury hotels its speciality and prices during this period are becoming exorbitant. In short, this is a logical consequence when we are described as the "pearl of the Indian Ocean".

The high season runs from October to early December and from mid-January to late April.

The mid-season runs from early August to late September, and the low season from early May to late July. It is during these last months that we can benefit from the best offers (discounts for families, newlyweds, second week offered, interesting packages...). In any case, keep in mind that flights are often booked for a good part of the year and that, unless you leave alone without any mandatory time constraints, it is better to book your stay several weeks or even several months in advance.

Due to the Covid-19 pandemic, entry and travel restrictions may apply Mauritius. Remember to visit the site of the Ministry of Foreign Affairs before you leave for the latest information
Practical information for travel Mauritius
Formalities Budget Horaires Getting around Gastronomy

Top 10 of the things to discover in Mauritius

How to go Mauritius

It is very easy to go to Mauritius alone and travel there, as many Mauritians speak French. The offer of accommodation, activities and restaurants is very varied. Scorers will be able to program on a daily basis, but remember that an address must be provided on arrival

Many tour operators offer all-inclusive stays in Mauritius with activities and excursions organised from the hotel. Other, more thematic stays will include a stay in Rodrigues or Reunion Island. Finally, Mauritius is a popular destination for honeymoons, special offers are planned for newlyweds.

It is very easy to travel in Mauritius, the island being small and the distances are short.

By taxi. They are all over the island and their price is negotiable. They do not hesitate to go around the island.

By bus. It is by far the most economical way to travel and they cover the whole country.

In the car. The road network is well developed and serves all the island's urban areas and strategic points. Be careful, we're driving on the left.

Mauritius is back to red: vaccinated travellers can go there again

Of course, it has everything of an island - the one of our European dreams in need of colours, softness and warmth when the winter hits: exoticism, coconut palms, the zoli parlé kréol, the cool-attitude, the white of the sand and the turquoise of the lagoon. But not only that. Geographical and strategic crossroads on the vast Indian Ocean, successively invested by peoples from Europe, Africa and Asia, Mauritius offers its mixture and its plurality to those who thought it was exclusively seaside. There are temples, pagodas, processions and folklore. They are rites, prayers and traditions. Multiple heritages: culinary, literary, musical, architectural... and natural too since beyond the beaches, in the green heart of the island, peaks, forests, waterfalls, etc., create the relief

From craters to places of worship, from Chinese tabagies to beach caravans, from street art to street food, Mauritius surprises and cultivates its rich diversity.

It is the favourite interjection of Mauritians, the most used whatever the community or social rank. It does not have a precise meaning, which depends on the tone expressed: joy, surprise, sadness, anger, etc. Another expression frequently heard and used: Ki manier? for how are you? Answer: Korek, ça va

It is the national flower of Mauritius. Originally from Colombia, it was introduced to the island at the end of the 19th century from European greenhouses. Abundantly cultivated in the country, it often forms the basis of local floral compositions. Its hues vary from white to red, through various shades of pink and orange.

Not to be confused with gambas. This large shrimp with delicious flesh does not live in the sea but in fresh water, especially in rivers with well oxygenated waters. Increasingly rare and therefore rather expensive to consume, it is often raised in barachois (fishponds) to be served in the best restaurants on the island.

Holiday home and/or secondary residence of Mauritians in the cities in the form of a villa or seaside bungalow, open to nature and still made of wood for the most authentic. With the growth of tourism, some campsites are replaced by residences, others are offered on the rental market.

Casuarina equisetifolia. Omnipresent on the coast, resistant to salt and heat, it looks like a long pine. In addition to offering providential shade and an ideal retreat for a nap in the sea breeze, it helps limit the erosion of coastal areas. In front of hotels, it is replaced by the coconut tree, considered more "exotic".

Delonix regia. Native to Madagascar and common throughout the intertropical zone, the tree adorns itself with large bright red flowers from mid-November to mid-January, forming at its top an absolutely spectacular vermilion-coloured plant parasol! Mauritians love it because it announces the Banana (the good year) and accompanies the festive season

Adorable little green or light brown climbing lizard with big sticky legs and suction cups. Omnipresent on the walls of houses and hotels (sometimes even in the bedroom!), it is absolutely harmless and feeds mainly on insects (especially mosquitoes). Its light and slightly shrill cry sounds like a small hissing sound

Chinese noodles fried with spices, vegetables, eggs, chicken, etc. Popular, it is one of the most common, hearty and cheapest dishes in Mauritius. Originally prepared in Asian canteens, mines are now offered everywhere - gargotes, Creole or international cuisine tables..

Cultural richness of the different islands of the Mauritian Republic, it is both a music and a dance whose origins go back to the time of slavery. If it has its own groups, singers, troupes and show days (especially in hotels), it also invites itself in the private sphere during weddings or family reunions

Reflecting the island's mix of cultures and the lifestyles of its inhabitants, street food is part of Mauritius' heritage. Everywhere in the streets, on the beaches, near the bus stations, the trailers of the street vendors stand. Dumplings, gatos chillies, dholl puris, rotis are the stars of the local food culture with its delicious flavours

Mauritian version of the Arab grocery store except that you go to the "Chinese"! Historically created and run by Asians, these stalls, which are omnipresent throughout the island, sell food and a little bit of everything: household products, drinks, shampoos, notebooks, hardware and - hence the name - cigarettes and tobacco

This veranda appeared in the 18th century with the French colonists and surrounded the ground floor of colonial houses. Open to the garden, it was one of the main living and reception areas of the house. Nowadays, Mauritians call varangue any covered terrace, even the one that borders only one side of the house.

You are smiley and cool, never (or very rarely) get angry, never raise your voice, and take life in stride, with a certain fatalism and gentle philosophy.

You accept differences - cult, clan, caste - and, while not excluding resentment and criticism, you hold up your 'Mauritianism' as an antidote to racist excesses.

You never wear monokinis or, worse, naturism on the beach.

You don't move anything in the sea and don't touch the corals.

You never cross the coral reef (except by boat when you are a skipper).

When driving, beware of stray dogs, mopeds, pedestrians on the road, and buses that run over.