Portugal is a land of contrasts. Between the steep valleys of the Serra d'Estrela and its snow-covered passes, the heavenly beaches and coves of the Costa Vicentina, the endless plains of the Alentejo, the sun on all or almost all the sea fronts... Portugal is indeed a plural country. In terms of cities, the choice is also wide: Lisbon the enchanting, festive and fashionable; Coimbra and its hordes of students, whispering a centenary fado; Evora, a museum city with the sunny cobbled streets of the heart of the country; Porto, with its rich architecture and famous vineyards... Expect to make your taste buds travel too, there are countless regional specialities and by following the indications of the tourist guide on Portugal, you are likely to enjoy yourself. From the fresh fish just caught by the sailors of Nazaré to the famous 365 cod recipes, not to mention the tasty pasteis of Belém, get ready to make some great discoveries. A city steeped in history like Braga will enrich your stay in Portugal. Feel free to discover the country by venturing inland. The Douro Valley, for example, is a treasure with the natural beauty of the country; it is one of the must-see sites (a UNESCO World Heritage Site! The beautiful beaches of the Azores archipelago will delight surfing fans. With your travel guide, discover this country of the Iberian Peninsula and its tourist attractions without further delay.

What to see, what to do Portugal? 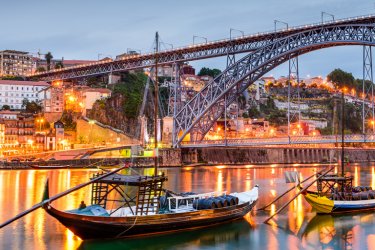 What to visit Portugal ?

When to go Portugal ?

If you have the choice, the best periods to spend a holiday in Portugal are spring and especially the month of June (popular festivals), the beginning of summer (many festivals) before August (the time of holidays for the Portuguese, therefore higher prices) and the beginning of autumn (before the rains). Summer is of course the great season for festivals. June is one of the most interesting months for the feasts of St. Anthony, St. John and St. Peter, which are among the main events of the month. There are also the Santiago de Setúbal Fair (late July, early August), the Bullfighting Culture Week in Vila Franca de Xira (June), the Almada Theatre Festival (July), the Harvest Festival in Palmela, the Seixal Jazz Festival (October) and the many contemporary summer music festivals

Due to the Covid-19 pandemic, entry and travel restrictions may apply Portugal. Remember to visit the site of the Ministry of Foreign Affairs before you leave for the latest information
Practical information for travel Portugal
Formalities Budget Horaires Getting around Gastronomy

If you arrive in Portugal by air, you will have the choice to land in Lisbon, Porto or Faro. And it is from this choice of arrival that you will establish a route. Some will choose to stay in the city for a weekend for example (for a first dive into Portuguese city life), while others, having more time, will opt for a route in a region (the Algarve or the north), or thematic (such as the discovery of archaeological sites in Portugal). Depending on your means of transport (car, train, bus, camper van...) and the length of your stay in Portugal, we have thought of ideas for itineraries that are as varied as possible. Follow or be inspired by them to establish the circuit that attracts you. Either way, we wish you a great discovery of Portugal.

And if you find it difficult to choose, no doubt you will come back another time to experience another proposed stay ...

From Porto to Lisbon by Bike

One week in the Algarve

How to go Portugal

There are many direct flights to Lisbon for prices ranging from a single to a quadruple depending on the season. It should be noted that the price variation depends on the company borrowed but, above all, on the time required to book. To obtain attractive rates, it is therefore often essential to do so in advance. The country being very close, you can enjoy it during one of your weekends. From Paris, we are only 2h30 flight from the Portuguese capital.

Tour operators specialized in Portugal for stays in Portugal produce their own trips and are generally very good advisors because they know the region inside out. It should be noted that their rates are often slightly higher than those of general practitioners. Stays in Lisbon can be combined with Porto and Faro. Get ready for great discoveries!

In Portugal, the train and bus network is extensive and cheap. To go faster, you can take domestic flights that are very fast because of the short distances. However, the best way to travel throughout the country, including in remote areas, is by rental car. Many families of Franco-Portuguese origin do not hesitate to take the road to Portugal. By car or motorhome, the journey is similar to a road-trip, but it is easier to travel inland later on. This is a possible solution for a family stay. By choosing this option, you increase the chances of discovering beautiful places like picturesque little villages, which will change you from big cities.

The Alentejo, a nature and discovery trip

In Portuguese, it literally means "little lettuce", but it is also the term used to describe the natives of Lisbon. The plain surrounding Lisbon was a market gardening area renowned for its salads... We're telling you! In contrast, the inhabitants of Porto are nicknamed the tripeiros, the tripe eaters.

A dish eaten almost religiously by the Portuguese, it is cooked according to 1,000 recipes so that one never tires of it. This fish has been fished for several centuries in the Atlantic and Baltic off Norway and Canada, then dried and brought back to these sunny lands whose seas abound in good fish.

In the same day, you can have a drink in a bar that hasn't changed in a hundred years or in a trendy art gallery. In everyday life, the contrasts are even more striking. You can tear your hair out to find a mini-mart in town, but you can pay your bills from any ATM!

Without the Portuguese, there would be no Brazil, South Africa or India! At the dawn of the 15th century, the Portuguese left on caravels. Madeira, the African coastline, nothing could stop them! From these discoveries, Lisbon drew its wealth, glory, but also a common epic, an artistic expression and... a past that was sometimes heavy to bear.

Adverbial phrase that you will be asked if "is it enough? ». Don't hesitate to use it to thank the person who has done you a favour, for example by filling your tank of petrol, or by offering you an extra pastry in the morning at breakfast.

This nostalgic melody is the very expression of saudade. Fado is said to derive from the songs of the troubadours of the Middle Ages, or to have been born from the songs of sailors at the time of the discoveries, impregnated with their adventures and their sentimental life. The fadista is accompanied by a classical guitar with 6 strings and the Portuguese guitar with 12 metal strings.

This is the common thread of Portugal, in addition to its openness to the Atlantic Ocean. The rivers, notably the Douro, the Tagus and the Guadiana, wink at us almost everywhere. What a pleasure it is to be faced with these arms of water winding between the valleys!

This is one of the traits of the Portuguese. Hospitality is omnipresent and is coupled with great discretion. The French are among the favorites, as most people have family in France who emigrated during the Salazar dictatorship.

The history of Portugal is marked by barbarian and Spanish invasions. Remains of fortresses remain from this past, witnesses of a necessary protection in medieval times. As you approach the cities, you will often see the ramparts that served as protection against the enemy and their more or less well preserved fortress.

Most of the cities are located on high ground, with winding, inextricable and... paved streets. The golden rule for all travelers is to walk with good shoes, not too slippery and comfortable. Heels are to be avoided, at the risk of getting stuck in the disjointed cobblestones that make the charm of the historic centres.

These are the great feasts in honour of the patron saints of the cities. They still gather huge crowds of faithful. In Lisbon, Santo António is celebrated, a pure native of the Alfama. This saint is THE patron saint of the city. Have fun shouting "António! "in the street, and count the number of men who turn around!

It is an almost untranslatable word in French. Like a nostalgia for the glorious times of great discoveries, a kind of submission to fate, to the difficulties of life, a hope for a return to better days. It is the absence, the regret of what could have been or what has been, the resignation to what can never come..

You say hello, good afternoon and good night and not just "ola". Even in common parlance, the Portuguese use this way of greeting. From noon you can already say "boa tarde"

You've got football under your skin. You won't miss any game of your favourite club (FC Porto or Benfica) and you like to tease your "enemies". All this in a bar broadcasting the match or at home with friends.

You walk along the road, respecting the primordial safety rule: in the opposite direction of the cars and that ...

...to cross the road, you don't think to look for a pedestrian crossing

You can sit for hours in front of a coffee shop or at home watching life go by and nature come alive.

At noon you have yourlunch , either homemade or bought at the water's edge.

You can't miss a single episode of your favourite telenovela, a soap opera with twists and turns as varied as its characters are caricatured.