A magnificent bay, the Tagus estuary, crossed by an endless bridge, the Vasco de Gama bridge, sloping streets climbed by the tramway, a visit to Lisbon looks like San Francisco in Europe if not the other way around, a bit older. During your stay in the capital of Portugal, the most westerly capital of Europe, you will take advantage of your holidays to discover a rich heritage that dates back to Roman times and which has then passed through the centuries and influences, particularly Muslims, to this day. From the tower of Belém, the old port from which Vasco de Gama set off in 1497 to conquer the world, to the futuristic Parc des Nations, built for the 1998 Universal Exhibition, to the magnificent Place du Commerce (Praça do comercio), where the historic heart of the city beats, to the Château Saint-Georges and its magnificent panorama ideal for taking pictures of Lisbon or its other districts, there are many things to see absolutely and to visit well accompanied by your Lisbon tourist guide. The Portuguese capital is also ideal for walks through time in the cobbled streets of the old quarters of Alfama and in the Bairro alto, or relaxing in summer on the many sandy beaches in the surrounding area accessible by public transport such as Cascais or Estoril, a warm nata pastel in the mouth. In the evening, Lisbon transforms itself and takes on more festive tones where you can easily be convinced by the terraces of small restaurants to taste the typical dishes, most often cod-based, have a drink, or party to fado or other less melancholic music, at the Bairro alto or in the Docks district. You will enjoy strolling through the small streets of the historic districts of this beautiful city in summer.

What to see, what to do Lisbon? 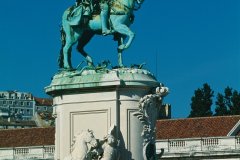 What to visit Lisbon ?

When to go Lisbon ?

If you have the choice, the best periods for a trip to Lisbon are spring and especially the month of June (popular festivals), the beginning of summer (many festivals) before August (the time of holidays for the Portuguese, therefore higher prices) and the beginning of autumn (before the rains).

Summer is of course the great season for festivals. June is one of the most interesting months for the feasts of St. Anthony, St. John and St. Peter, which are among the main events of the month. There are also the Santiago de Setúbal Fair (late July, early August), the Bullfighting Culture Week in Vila Franca de Xira (June), the Almada Theatre Festival (July), the Harvest Festival in Palmela, the Seixal Jazz Festival (October) and the many contemporary summer music festivals

Due to the Covid-19 pandemic, entry and travel restrictions may apply Lisbon. Remember to visit the site of the Ministry of Foreign Affairs before you leave for the latest information
Practical information for travel Lisbon
Formalities Budget Horaires Getting around Gastronomy

A weekend in Lisbon

Discovery of Lisbon and its surroundings

A weekend in the vicinity of Lisbon

How to go Lisbon

There are many direct flights to Lisbon for prices ranging from a single to a quadruple depending on the season. It should be noted that the price variation depends on the company borrowed but, above all, on the time required to book. To obtain attractive rates, it is therefore often essential to do so in advance.

Tour operators specialising in stays in Portugal produce their own trips and are generally very good advisers, as they know the region inside out. It should be noted that their rates are often slightly higher than those of general practitioners. The stays organized in Lisbon can be combined with the discovery of Porto and Faro. Beware of pickpockets.

You have all the necessary means of transport in Lisbon. The bus serves the entire city, unlike the metro, which has only four lines, but whose stations are often magnificent works of art. During your city trip, you will have 5 tram lines at your disposal. A classic is to take tram no. 28 which crosses the historic districts of the city (Alfama, Bairro alto, Graça). To get a little higher, don't hesitate to use the panoramic elevators of the buildings as in Santa Justa in the Baixa district.

In Portuguese, this literally means "little salads", but it is also the term used to describe the Lisbon natives. No, Lisboetes are not born in lettuce or are not all vegetarian. The truth is that the plain that surrounded Lisbon in the past was a market gardening area famous for its salads.

That means cod in Portuguese. It is cooked according to 1,000 recipes so that you never get tired of it. It is also the traditional Christmas dish that replaces our dear turkey. We will always be surprised by the enthusiasm that this fish has aroused for several centuries. However, as you should know, it is not fished in territorial waters.

Lisbon is made up of seven hills, which you will have to explore if you want to get to know it. It takes good calves! The views to which you will be entitled, on the other hand, are breathtaking, with a small part of the Tagus at the bottom, some palm trees and an 18th century palace. No wonder the city has so many elevadores.

Seeing it in all the shops, one would tend to believe that the term "Portugal" comes from Portus Gallus ("the port of the rooster", in Latin for cooking). Not at all. On the other hand, the rooster does have a legend, that of Barcelos, which speaks of a pilgrim wrongly accused and who proved his innocence by a miracle involving... a rooster therefore

An old legend has it that two crows watched over the tomb of Saint Vincent, a medieval martyr buried on the cape of the same name (southwest of the country). When Alfonso Henriques, the liberator of the city of Lisbon, fetched his remains, the two ravens escorted the caravel on its return journey to Alfama.

Born from the desire to make the former Tagus quays profitable, from which caravels and ships once left and returned full of treasures, they now house bars, terraces, restaurants, nightclubs, and a few galleries, at the very place where soldiers embarked for the colonial wars in Africa.

There is no way out, it is almost a religion here and it fuels a lot of debate and even arguments within families. If you understand Portuguese, you will often hear conversations at lunchtime about the performances of Benfica or Sporting players (the most famous clubs), especially in the aftermath of the match.

For some, fado would derive from the songs of medieval troubadours; for others, it would have been born from the songs of sailors at the time of the great discoveries, imbued with their adventures and their emotional life. Lisbon is one of the cities where Fado has developed. The topics covered are often part of everyday problems.

In recent years, the liberalization of the real estate market has created a real boom and renewal. Lisbon is back to its former glory and prestige. People here will tell you that the downtown area is unrecognizable. On the other hand, rents have exploded, making it difficult today to rent an apartment at an affordable price..

Even if Portugal, and particularly Lisbon, is deeply oriented towards the Atlantic with Celtic features, the few centuries of Moorish occupation have had a profound impact on the city: place names, architecture, garden art. You will be surprised to see how much cinnamon and coriander are used in Portuguese cuisine

On the night of 25 April 1974, Zeca Afonso's song, Grândola Vila Morena, broadcast at 12:25 on the Catholic radio station in Lisbon, was the expected signal. The captains of the army, disgusted by the colonial wars, openly threaten the government. That day, we see the soldiers in the street with carnations at the end of their guns.

A word almost untranslatable in French (or any other language for that matter), but oh how much the Portuguese feel! It is the absence, the regret of what could have been or what has been (without the idea of remorse), the resignation to what can never come... It is also the breath of fado, the soul of the whole country.

You let people enter the bus in order of arrival at the stop. This implies that when you arrive at the station, you have identified the people already there

You say good morning, good afternoon and good evening and not just "ola". Even in everyday language, the Portuguese use this way of greeting. There is always a moment of hesitation between hello and good afternoon, but usually by noon you can already say "boa tarde"

You cultivate patience. It will not be uncommon in a restaurant to make you wait for the menu or the bill. We reassure you, you have not become transparent! It's normal, so don't get upset

You stop questioning everything. Being Portuguese also means accepting things as they are and not looking for logic where there is none

You change your plans at the last minute by "going with the flow". It's hard to plan anything, but it allows for a certain amount of freedom..

Other destinations nearby Lisbon