If Lisbon is overshadowing it, Porto, the little-known city in the north, is nevertheless worth a visit. This magnificent city built over the mouth of the Douro River is famous for its imposing bridges, one of which was designed by Gustave Eiffel, its historical monuments and its wine production: the famous port. Along the river, the old strong center of the medieval district of Ribeira is a Unesco World Heritage Site. We walk in the paved streets crossing stores, cafes, churches and monastery. Stop at the baroque church of São Francisco and the fortified cathedral (Sé), at the sumptuous Palácio da Bolsa (19th century), former stock market. You can stroll through the market, admiring the stalls and nibbling on specialties in the street. It's already time for port, the famous local aperitif wine. You can stock up on bottles at the source and enjoy enlightened tastings. And don't forget to try the delicious local cuisine, generous and full of flavors, which puts fish, especially cod, in the spotlight, as well as all the vegetables and fresh herbs of the sun. And don't forget the garlic! For night owls, the cafes stay open until the middle of the night and the discos take over until the early hours. But there is still so much to do! A cruise on the Douro, shopping in the boutiques of Santa Catarina street with a stop at the Majestic, the centennial café, listening to fado, visiting the most beautiful bookshop in the world (Lello)... Consult your Porto travel guide to make sure you don't miss anything!

What to see, what to do Porto? 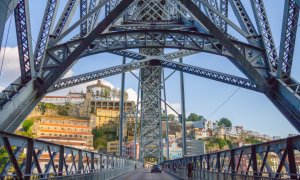 What to visit Porto ?

When to go Porto ?

As in France, the high tourist season is in the summer, in July and August, the middle season from May to June, and from September to October, the low season the rest of the year. With regard to temperatures, Porto is a pleasant destination all year round, except for the cool and rainy winter. The summer season is the sunniest and most pleasant as it is often the case in Portugal. To avoid the crowds, opt for a departure in September since the climatic conditions are more or less the same with a few days of rain in addition. There is no Indian summer because the oceanic climate implies a maximum rainfall between October and March. Despite the mild temperatures, the omnipresence of rain in winter prevents you from fully appreciating Porto. From April you can go there. Spring is ideal to enjoy Porto without the summer crowds.

Due to the Covid-19 pandemic, entry and travel restrictions may apply Porto. Remember to visit the site of the Ministry of Foreign Affairs before you leave for the latest information
Practical information for travel Porto
Formalities Budget Horaires Getting around Gastronomy

A weekend in Porto

Porto and the North

The road of churches and pilgrims

How to go Porto

It has become really easy to plan a short trip to Portugal's second city for a very reasonable budget. The airport of Porto is well served and the accommodation is not exorbitant, as everywhere in Portugal: a small 3 star hotel or a pension in the center of Porto, remain at affordable prices even for the tight budgets...

It is not the most touristic destination, nevertheless the travel companies propose it. You can choose between a weekend, a week, or even a stopover in an organized tour from Lisbon, with flight + accommodation packages or more complete integrating a guide, a tour of the city and a program of visits. The formula is not very advantageous financially. The city is full of good hotels at good prices, activities are easily bookable and you can move around quite easily to visit the best tourist and historical places because they are concentrated in the center.

Getting around this Portuguese city is easy thanks to public transport and walking is sometimes enough to get from one point to another. With 5 metro lines, the whole city is served, from east to west, as far as the port of Matosinhos, the airport, Povoa, and the artisanal and commercial areas of northern Porto. There are also numerous buses and 850 cabs. You can rent bicycles, Segways, motorcycles and scooters. Picturesque: the historic streetcar no. 1 takes you along the river, from the center to the beach.

There is so much to see and do in the Cidade Invicta (Undefeated City)! Between museums, historic buildings, wine cellars and the Douro River, the options are many. Each neighborhood in Porto is full of treasures to discover. We have divided them into five: "Upper Town", which includes the city center and most of the neighborhoods nearby, Ribeira and Miragaia, Foz do Douro and Vila nova de Gaia, which is not a neighborhood per se but is a must-see in Porto. The best way to visit the city from the center is on foot! You will combine visits to sites and beautiful views of the Douro. You will cross the Dom Luis I bridge to reach the other bank of the Douro, stroll along the Gaia docks and enjoy a glass of Port wine. Finally, reach the Atlantic Ocean by streetcar, bicycle or on foot if you have any strength left

The fabulous destiny of Fado

The famous Portuguese tiles are present on the facades of historic buildings, churches and the São Bento train station, which is all set with them. If at the beginning the use of azulejos was expensive and reserved only for decorative panels, with time and the industrial cutting of the pieces, it was possible to dress the facades of houses

It means cod in Portuguese. It is cooked according to 1,000 recipes so you never get tired of it. It is also the traditional Christmas dish that replaces our dear turkey. We will always be amazed at the craze that this fish has aroused for several centuries. However, you should know that it is not caught in territorial waters.

On the left bank of the Douro, in Vila Nova de Gaia, the cellars where the Port wine is aged are part of the city's landscape, albeit underground. The cellars are not without their large signs. The atmosphere, the wine aromas emanating from the barrels and the tastings make a visit to them an obligatory part of the Port experience

By dint of seeing it in all the shops, one would tend to think that the term "Portugal" comes from Portus Gallus ("the port of the rooster", in Latin for "kitchen"). Not at all. On the other hand, the rooster does have a legend, that of Barcelos, which speaks of a pilgrim who was wrongly accused and who proved his innocence by a miracle involving... a rooster.

Porto is one of the cities where the fado, a melancholic music mixing voices and Portuguese guitars, developed. It is said to derive from the songs of the troubadours of the Middle Ages, or to have been born from the songs of sailors at the time of the Great Discoveries, imbued with their adventures and their sentimental lives. The themes dealt with are often related to everyday life.

You can't escape it, it's almost a religion here and it fuels a lot of debate and even arguments within families. If you understand Portuguese, you'll often hear conversations about the performances of FC Porto's players, especially on the day after a match, or small tackles against domestic rivals Benfica.

Listed as a UNESCO World Heritage Site since 1996, Porto possesses an architectural ensemble of immense richness. Around a hundred listed monuments can be seen in the historic centre, between the upper town, the Ribeira and Miragaia districts, and the Agostinho da Serra do Pilar convent, located on the other bank of the Douro

Most cities are located on high ground, with inextricable, tortuous and winding streets.... paved. The golden rule for all travellers is to walk in good shoes, not too slippery and comfortable. Heels are to be avoided, at the risk of getting stuck in the disjointed cobblestones which make the charm of the historical centres.

A total of six bridges link the Douro margins to Porto. They are emblematic of the city and are part of its history. The best known is undoubtedly the Luis I bridge, often wrongly attributed to Gustave Eiffel. The bridge was in fact designed by his associate Teófilo Seyrig. Eiffel himself signed the Maria Pia railway bridge, inaugurated in 1877.

These small, colourful traditional boats used to transport the barrels of wine from the vineyards of the Douro Valley to the cellars of Vila Nova de Gaia. Nowadays, they are mainly used for tourist cruises of about an hour. The best known of these is the "six-deck cruise"

An almost untranslatable word in French (or in any other language for that matter), but oh how much it is felt by the Portuguese! Saudade is the absence, the regret of what could have been or what has been (without the idea of remorse), the resignation in front of what can never come... It is also the breath of fado, the soul of the whole country.

This is the nickname given to the inhabitants of Porto, "the tripe eaters". It comes from the time of the Great Discoveries, more specifically from Vasco de Gama's expedition. The Portuguese proudly gave all the meat they had to fill the crew's larder. All they had left to eat was the offal.

You let people get on the bus on a first-come, first-served basis. This means that when you arrive at the station you will see who is already there

You say good morning, good afternoon and good evening and not just "ola". Even in everyday language, the Portuguese use this way of greeting. There is always a moment of hesitation between good morning and good afternoon, but usually from noon onwards you can already say "boa tarde".

You cultivate patience. It is not uncommon in a restaurant to make you wait for the menu or the bill. We reassure you, you have not become transparent! It's normal, so don't get angry

You stop questioning everything. Being Portuguese also means accepting things as they are and not looking for logic where there isn't any.

You change your plans at the last minute by going with the flow. It's difficult to plan anything but it leaves a certain amount of freedom .

Other destinations nearby Porto