The "Pearl of the Ocean" is made of fertile soil with a heavenly climate, that of an eternal spring, hence its superb flora. Funchal, a charming colonial-style capital with its small houses with white walls, is a long-standing stopover on the road to the Americas. The city now vibrates with the constant flow of liners and tourists on the lookout for museums and churches, with an imperturbable sweetness of life.... Madeira also reveals its wild coasts and its constellation of mountainous villages. Although the inhabitants defend a very island-like identity, we find this peasant and welcoming atmosphere so widespread in the countryside of continental Portugal. For swimming, the natural swimming pools of Porto Moniz in the north of the island and the endless white sand strip of Porto Santo, the neighbouring island, are very pleasant. So many facets of this small Portuguese archipelago that you can discover even better by following the indications of the Madeira tourist guide. But despite its very touristic aspect, Madeira still has some sites off the beaten track and a museum dedicated to the famous footballer Ronaldo, a local child!

What to see, what to do Madeira? 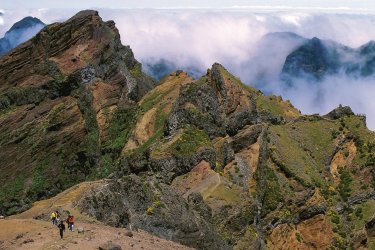 What to visit Madeira ?

When to go Madeira ?

Thanks to its mild climate, Madeira can be visited all year round. The high tourist season is of course summer because of the seaside resort aspect of the island but the best time to visit Madeira is spring during the months of March, April and May, a period during which Madeira is beautifully flowered; it is easy to understand why it is nicknamed "the island of flowers". If you go to Madeira at the end of February/beginning of March, you will probably have the chance to attend the Madeira Carnival; it is always a great moment between parades of flowery floats and extravagant costumes.

Due to the Covid-19 pandemic, entry and travel restrictions may apply Madeira. Remember to visit the site of the Ministry of Foreign Affairs before you leave for the latest information
Practical information for travel Madeira
Formalities Budget Horaires Getting around Gastronomy

In recent years, the Madeira coast has changed its face. Fishing ports have been transformed into exciting little seaside resorts. But you will certainly not come to Madeira just to relax on its beaches or by its natural pools. Turn your back for a second to the ocean and, facing the green walls, ask yourself: what would Madeira be without its mountains and hiking trails? The Island is as beautiful at low altitude as it is high up, and we can only advise you to explore the interior of this garden, which is less crowded at a time when the summer sun is attracting crowds to the coast... You will have understood it, the richness of the island is revealed according to the marked out paths. Also, when organizing your stay, keep in mind that the distances are relatively short (allow an hour and a half to cross the island from east to west by the expressway).

A week in Madeira

How to go Madeira

Book early for the best rates if you leave during the summer because prices can double compared to the rest of the year. On site, it is easy to organize your stay alone but it is also recommended to book your hotels early during the high season to get the best rates.

Many tour operators offer tours to Madeira. They are generally cheap and last from 10 to 15 days. We recommend you to take a tour that includes cultural visits to Funchal or picturesque villages, beach stops in Porto Santo for example and above all visits to natural sites with a hiking section. Not hiking in Madeira would be a real shame because the landscapes are sublime and leave an unforgettable memory.

Several bus companies serve Madeira and they all pass through Funchal. It is quite easy to travel by bus across the island. But to be able to go anywhere the ideal is still to rent a car, you can find agencies quite easily in the capital. No train in Madeira, however.

On the road to the New World, from primary forests to jagged coastlines, from very lively traditions to volcanic summits, plunge into the heart of this autonomous island region as peaceful as it is endearing. Discover the fascinating history of the Madeira Archipelago through the Great Portuguese Discoveries. Discover the secrets of its exuberant nature and the richness of its endemic flora and fauna (Madeira Petrel, Trocaz Pigeon, Monk Seal...). Salivate over its culinary specialities with exotic flavours, whether you bite into them with appetite or sip them in moderation. Discover the attractions of its colonial heritage, its magnificent quintas, charming houses. Understand also its current challenges, the role of tourism and the specificities of its legendary spring climate. In short, you will be given a portrait of the Madeira Archipelago, a prosperous garden embodied by its gentle way of life.

The wine, nectar of Madeira

These glazed tiles are one of the trademarks of Portuguese art. Originally from Morocco (the term azulejo comes from the Arabic al zulaydj which means "small polished stone"), they travelled to Andalusia along the "earthenware route", then to Portugal (they are said to have seduced Manuel I during a visit to Spain)

It's hard to miss Madeira's famous bolo do caco, a delicious round, flattened homemade bread containing sweet potato (grown in abundance on the Island). It is usually spread with garlic butter and served before the appetizer. It's also the basis of Madeira sandwiches: go for a prego especial (with an egg), our favourite!

An age-old tradition in Madeira. Whether on canvas, linen, organza, shawl, handkerchief or tablecloth, the pieces reveal a delicacy and meticulous craftsmanship that has woven the reputation of Madeira embroidery across the borders. Bordal, established in 1962 in Funchal, is the best known.

It's time to stock up on vitamins and tropical essences! The island is a fertile ground where many exotic fruits are grown. On the stalls of the farmers' markets, bananas, guavas, avocados, mangos, kiwis, passion fruit, papayas and other less known fruits, such as anona or tamarillo, make your mouth water!

To cope with the unequal distribution of water resources on Madeira Island, the first settlers had a brilliant idea: to build a network of canals - the levadas - capable of transporting water from the mountains to the arid lands to the south of the island. Marked out with marked trails, this is an opportunity for memorable hikes.

The term quinta in Portugal refers to large agricultural estates consisting of several buildings. Madeira has many quintas, these traditional residences, many of which have been converted into charming hotels, wine estates or museums, and are surrounded by magnificent pleasure gardens where endemic species and tropical plants grow.

Madeira has the largest surviving primary laurel forest to date in Macaronesia (it exists only in Madeira, the Azores, the Canary Islands and Cape Verde). Its origin dates back to the Tertiary era. Listed as a World Heritage Site, it has a unique ecosystem inhabited by many endemic species, such as the Madeira Trocaz pigeon.

Don't be fooled by the exotic and sweet aroma of this typical alcoholic drink of the archipelago. A real time bomb, originally made from rum (traditional of the island), lemon juice and honey. It is now concocted with a whole bunch of local exotic fruits (try the poncha de maracujá, to die for!)

A five-stringed instrument, traditional in Madeira, it is said to be the ancestor of the Hawaiian ukulele! In 1879, Madeira migrants who had left to work on the sugar cane plantations in Hawaii brought with them a kind of small guitar. Hawaiians would later have made their own version, between the guitar and the rajão, called the ukulele.

Hydrangeas, anthuriums, magnolias, bougainvilleas, agapanthus or birds of paradise, in gardens, in the heart of forests, on the roadside.... Everywhere on the island, flowers compose sublime bouquets. A panache of fascinating colours exalted every spring on the occasion of the Flower Festival that invades the streets of Madeira's capital city.

Although the first vines were planted on the island as early as the 15th century, Madeira wine has since gained its reputation. Even today, a process called estufagem is still used to give this elixir its special character. Several methods exist, including canteiro, which consists of ageing the wine in the heat of the sun

This Portuguese architectural style was born during the reign of King Manuel I (1495-1521) and was part of the period of the Great Discoveries. It is a counterpart of the late Gothic style, drawing its inspiration from the world of the sea, with complex sculptural features such as the armillary sphere, a navigational instrument and emblem of Manuel I.

You drink tap water. And, yes, it's perfectly portable. And to encourage consumers to drink tap water and reduce the production of plastic waste, in 2018 the government even launched a campaign praising the quality of the water coming out of its taps!

You know that Nikita is not only the name of a 1990 film by Luc Besson, but also the name of a vanilla ice cream flavoured cocktail born in Câmara de Lobos in the 1980s. Its name is said to be inspired by the famous Elton John song.

You drive skillfully (and without getting lost!) on the steep roads of the island, day and night. Not always easy when you're not from around here (even with a GPS!).