A paradise lost in the vastness of the Atlantic Ocean, Cape Verde is still a destination preserved from mass tourism. With its ten wild and mysterious islands, all different from each other, it is a magical country. By following the instructions of your tourist guide on Cape Verde, you can organize an ideal and authentic stay in this small island country of Africa. Hikers will escape to the green mountains and lush vegetation of Santo Antão or São Nicolau. Water sports enthusiasts can enjoy the magnificent fine sandy beaches of the islands of Sal or Boa Vista. Those in search of adventure will climb the Fogo volcano and remember its lunar and paradisiacal landscapes, and the Robinson Crusoe will enjoy a day of deep-sea fishing. Cape Verde is also an attractive country where Creole, African, Brazilian and Portuguese traditions blend together, and a population renowned for its kindness

What to see, what to do Cape Verde? 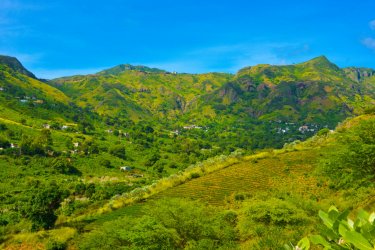 What to visit Cape Verde ?

When to go Cape Verde ?

When to go to Cape Verde? Cape Verde's high tourist season runs from mid-June to mid-September and from mid-November to early January, when emigrants, the Cape Verdean diaspora, return home. The end of the year is the best time to go to Cape Verde if you are a hiking enthusiast. It should be noted that it is imperative to book accommodation and air connections a little in advance to have a place in high season. Otherwise, Cape Verde can be visited all year round, with an average air temperature of around 25°C and a sea temperature of 24°C.

Due to the Covid-19 pandemic, entry and travel restrictions may apply Cape Verde. Remember to visit the site of the Ministry of Foreign Affairs before you leave for the latest information
Practical information for travel Cape Verde
Formalities Budget Horaires Getting around Gastronomy

How to go Cape Verde

Cape Verde is a rather safe country for solo travellers. However, avoid walking alone in a big city at night and do not show any outward signs of wealth. Do not venture without a mountain guide because rescue is much less effective than in Western countries in the event of a problem...

An all-inclusive ten-day stay in Cape Verde can include a trip to a maximum of two or three islands. For example, a visit to the volcano of Fogo, a must-see in Cape Verde via Santiago (3 days if you want to visit the island, one day otherwise), or a stopover in Mindelo, the "Brazilian" city of Cape Verde. This tailor-made trip can end with a stop on the island of Sal to enjoy its beautiful white sandy beaches and rest from visits or treks.

Domestic flights and ferries connect the islands. For boat trips, two or three companies operate almost regularly, Fast Ferry, Armas and Interilhas. They easily and frequently connect some islands together, whether they are Barlavento (islands in the north of the archipelago) or Sotavento (islands in the south of the archipelago). Fast Ferry provides daily Santiago-Fogo-Brava connections. However, due to the rough seas, delays are frequent by boat

The Cape Verde archipelago, ecotourism, beaches and parties under the sun

10 sports activities to do in Cape Verde

Still a secret destination, Cape Verde has known how to preserve itself in order to better let itself be discovered, without the least excessive complex, where the alchemy between nature and tradition is cultivated. This island country, close to the elements, can be read in the light of its oppressive past, in the plurality of its islands with a unique identity and in the colors of the sands that line its coasts. Here, men have shaped the landscapes, by paving inaccessible and perilous paths, or by planting vineyards and citrus fruits on a volcano. They perpetuate an ancestral know-how, while advancing in the modernity and the opening to the international. But they are still struggling to tame a rare resource that is worth its weight in gold, the water that is still lacking. Prepare to be enthralled by this solar escape and to appreciate the flavors, the slowness and deliberately lose the notion of time and space ..

These are local transports also called coletivos or Hiace, after the Toyota model. The aluguers (minibuses, VL, pick-up or 4x4) go in a given direction and take several passengers on the sides of the road, so the duration of the journey is random. This is the best way to meet the locals and to immerse yourself in the local life

These two terms determine the orientation of the islands according to their position in relation to the prevailing north-east wind. The northernmost ones, Sal, Boa Vista, São Nicolau, Santa Luzia, São Vicente and Santo Antão constitute the Barlavento (windward) islands. The southernmost, the Sotavento (leeward) islands, include Maio, Santiago, Fogo and Brava

In the spotlight is cachupa, the national dish that is omnipresent in every home and on every menu. A comforting stew, prepared in different ways, it includes hominy corn, beans, root vegetables, pork fat (simple version) or meats (enriched version). The refogada is served with sausage and egg for breakfast

Inspired by the Brazilian carnival, it tends today to develop on all the islands. Mindelo's carnival attracts more and more curious people from all over the world. For the parade, each group chooses a theme and develops a choreography, in the greatest secrecy. On Mardi Gras day, the show gives way to the party, the floats and the parades.

In order to communicate with each other, slaves were forced to gather words from Portuguese and other sources and these mixtures are the origin of the Cape Verdean mother tongue. It is basically a 15th century Portuguese with a simplified grammar; phonetics and vocables were added from Mandingo languages

Water is scarce and an indispensable factor for development, which is why the State devotes part of its budget to it. Some houses do not have access to running water, in the dry areas of São Nicolau, or in Sal, Boa Vista, Maio where desalination of sea water is practiced in addition to the water delivered by tankers

Sugar cane brandy and the country's main alcohol, grogue is to Cape Verde what rum is to the West Indies! Regulated by law since 2015, production takes place between January and May. On the islands of Santo Antão and São Nicolau, you can visit the trapiches (traditional factories where sugar cane is crushed) while discovering its flavours

Music accompanies Cape Verdean life and draws its strength and character from the collective, often painful, experience. One of the highlights of a trip is listening to the morna shaped by guitars and violins in a café in the evening, or the livelier strains of the funaná, enhanced by the strumming of a unique percussion instrument

The archipelago and salt is a love story: as proof, the name given to the island of Sal. Indeed, in the 19th century, the island was the economic pillar of the country thanks to the extraction of this strategic product. Pedra Lume perfectly illustrates the epic of this white gold rush. The other flat islands also had their heyday.

These two-storey houses with a timeless look were built during the colonial era. They were used to delimit social classes but also to indicate the personal wealth of its owner. Today they constitute a significant architectural heritage and one can see very beautiful and colourful examples in São Filipe and Mindelo.

Cape Verde is an important stopover for turtles along their migratory corridor between America and Africa. The archipelago is a refuge for them and although the local population continues to collect eggs and glorify the taste of turtle soup, they are now aware of the growing pressure for their preservation.

A great hiking destination, the views from the mountains, the lonely slopes of Brava and the amazing crater of the Fogo volcano, make this region a unique experience. Much of the walking is done on the extraordinary cobbled paths made in the most unlikely corners, which makes the exercise easier than one might think.

You don't hesitate for a second to eat a steaming cachupa refogada for breakfast, made of corn and refried beans, forgetting the coffee-croissant and all your usual cues...

You play a musical instrument with ease, learned from a young age with a family member, whether it be guitar, violin, gaita or conga.

You plan to spend almost every weekend with family or friends at a beach restaurant, not only for food but also for dancing, listening to live music, singing along and partying..

The ponche recipe has no secret for you and you are at the point of making it "home" with the fruity mixtures of your choice.

Being invited to join the dance floor and evolve on a coladera, batuka, mazurka or another dance stuck cheek to cheek with undulating movements, does not impress you in the least.