"This point was bought by France from the Sultan of Tadjourah. Exactly three rocks in the sea, with a few reefs around it, but, as it was, it had seduced France. She married him not for his beauty, but for his background, a good background that would make a beautiful bay. "Albert London, Pearl Fishermen.

Djibouti has become a major port and a city with very little exposure to the sea. The capital of a country of nomads devoid of beautiful buildings and museums. Here, on African soil, there are no European, Arab or Indian architectural testimonies. Djibouti is neither Zanzibar nor Asmara. The city can charm with its colonial quarter with Moorish architecture, but it remains modest.

The uniqueness of Djibouti is all in its special atmosphere: white walls, horizontal buildings, the colours and smells of the market, the dynamism and resourcefulness of a young nation. The small anchorage has become an international port, attracting all kinds of people. The capital acts as a magnet for nomads from the inland.

Djibouti, the Red Sea Watch, fixes the French, American, Japanese and - soon - Chinese military (2017). Djibouti, the port, supplies sailors from all over the world and Ethiopian truckers. Djibouti, the pacified one, welcomes refugees from neighbouring countries that are tearing each other apart. Djibouti, the merchant, supports Pakistani builders, Indian or Senegalese merchants, Yemeni fishermen or Ethiopian, Vietnamese, Greek, French or Lebanese restaurateurs.

And each one of them adds his own touch to this cosmopolitan city, where one goes for a coffee and croissant on a terrace before venturing into the maze of neighbourhoods, to have lunch with an Ethiopian injera or a Yemeni moukbassa, between Africa, Europe and Arabia, which are the three faces of this city with its moving identity.

To see / do Djibouti

What to do in Djibouti ?

The Inevitable of the Mysterious Djibouti

Confusing… If it takes a word to qualify Djibouti, it is this. Mysterious little piece of African land bordering the Red Sea and the Gulf of Aden, it offers a multitude of amazing landscapes shaped by the shock of tectonic plates overlapping there. On the sea side, Djibouti is the seasonal refuge of whale sharks, peaceful seas of the seas that let themselves be approached without fear in turquoise water. Djibouti's beauty is also its ...

Prepare for your trip Djibouti 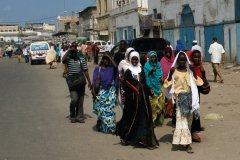 The festival where you swim with the sharks

No you're not dreaming, in Djibouti from December 20th to 31st, the Whale Shark Festival offers you a biting experience.... To stand next to the largest fish in the world in its natural environment, to feel its breath as close as possible and to cross its gaze without lowering your eyes. This unique festival fills divers, snorkelers and sea lovers of all kinds with indescribable magic. Rendezvous on Arta beach, one of the pearls of Djibouti, ...