Sicily is first and foremostEtna, the highest volcano in Europe, which you can see smoking and spitting from the plane, the boat or the train. From the roof terraces of the voluptuous Catania too. Sicily is above all the Sicilians, whose hospitality and spontaneous way of showing you the way, sharing a recipe and chatting with you even if your command of Italian leaves something to be desired. And it's also the joy of shopping for fruit, vegetables, cheese, olives and cold cuts, and of eating out, in the street near the fish market or in a great restaurant. It's no secret that a lot of things are settled around a table in Sicily! And then there are the pearls and wonders, the valley of the Temples more beautiful than the Acropolis, the cathedral and the city of Palermo, the peninsula of Syracuse, the beautiful and very touristy Toarmina, the archaeological remains and the perched villages. Take the time to swim in the sea and sail to the islands of the island, the windmills blessed by the god of the winds. But don't joke about the Sicilian mafia, you'll never know if your interlocutor is one or not. Do as the locals do, follow a religious procession through the streets of Palermo and rent a small house on a southern beach to spend a weekend with friends, drinking and tasting before putting on an elegant outfit to go and listen to an opera under the stars. And don't forget your travel guide to consult on many occasions.

What to see, what to do Sicily? 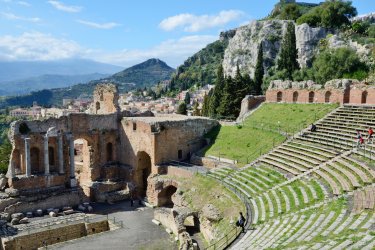 What to visit Sicily ?

When to go Sicily ?

Sicily is easily visited all year round, but the high season is concentrated in summer, with August being the month when establishments have the highest occupancy rate of the year. Try to avoid the month of August, which is also a hot month (the sirocco blows and the thermometer climbs to 40°C)! This is the month of seaside tourism in the large tourist complexes. We advise you to visit Sicily between May and September. The most pleasant periods to visit Sicily are from April to June (12/27 °C) depending on the month and the region and from September to October (21/27 °C). In winter (10/15 °C), there are no Japanese, American or French tourists. Apart from the climate and the number of tourists, the local festivities can help you choose the dates of your stay. Religious festivals are typically representative of Sicilian traditions, especially Holy Week with its processions of great effect throughout Sicily. Not to be missed: the Misteri di Trapani, on Good Friday. The feasts of the patron saints are also the occasion for processions and fireworks: Santa Rosalia in Palermo (14 July) and Sant'Agata in Catania (from 3 to 6 February, almost a million spectators) are just two examples. These are unmissable, but in Sicily each village has its own patron saint and festival. Let's not forget the summer cultural festivals either. Beware, low cost flights are more rare in winter

Due to the Covid-19 pandemic, entry and travel restrictions may apply Sicily. Remember to visit the site of the Ministry of Foreign Affairs before you leave for the latest information
Practical information for travel Sicily
Formalities Budget Horaires Getting around Gastronomy

How to go Sicily

This European destination is perfectly suited for a solo departure, even if you do not speak Italian. You can easily organize your stay on site according to your itinerary and your desires. Rent a car, book a hotel, choose a B&B, find a restaurant of all categories, visit interesting sites, everything can be improvised at the last minute.

Sicily and the Aeolian Islands are in the catalogue of many tour operators with the Palermo, Catania, Islands, Taormina, Syracuse and the Valley of the Temples programme. It is not the most economical formula but it is certainly the most effective to see a maximum number of sites in a minimum of time!

The island is served by low-cost flights to Palermo or Catania. Ferries connect Calabria to Messina. There are direct links between the ports of Sicily and those of Italy. From Catania and Syracuse, you can go to Malta or Tunisia. Ferries connect Messina to the Aeolian Islands. Comfortable and air-conditioned buses criss-cross the island and large cities have their own urban network. The train is cheap and connects, in particular, Messina Palermo and Messina Syracuse and by beautiful landscapes Catania to Messina, not to mention the circular line of Etna from Catania.

5 surprising destinations to discover on a trip to Italy

The Aeolian Islands, volcanic atmosphere in the Sicilian archipelago

From Syracuse to the top of Mount Etna, millenary culture and Sicilian hikes

Sicily, the largest island in the Mediterranean, ahead of Sardinia and Malta, has been a land of great strategic importance since antiquity. Colonized by the Greeks, then the Romans, the Byzantines, the Arabs, the Normans, the Spaniards, and other invaders afterwards, it has forged its history, its identity, its architecture and its people, over the course of this fascinating civilizational millefeuille. Discover its history, its population, its ways of life, its arts and crafts, its natural resources, its religions and beliefs... But also its geography, its natural wealth to better understand this destination with its picturesque and surprising facets and prepare your stay with useful knowledge. The volcanism of the island, or rather of its smoking giant Etna and its little brother Stromboli, are attractions specific to the destination that we detail in these pages.

These are the mythical Piaggio APE 500! These three-wheeled vans with a moped engine are used by peddlers to do the market, but also by some craftsmen who find this vehicle handy to transport goods in the narrow streets of the old towns. Some are decorated like works of art

What a joy to attend a Sicilian wedding! You will certainly have the opportunity to meet them on the church square. The bride is often filmed, while the guests compete in elegance. The women are perched on high pumps. The men wear black suits and white shirts with cufflinks. Italian class!

The circles of meetings, discussions, culture, various games, former fishermen or friends of X and Y... flourish all over the island. While during the passeggiata the ragazzi throw longing glances at the ragazze who pretend to do the windows, these places frequented by the old ones do not miss charm.

The best ice creams in the world are Italian. Is that a sweeping statement? Perhaps. But generally speaking, when it says gelateria artigianale (artisanal ice cream parlour), it's a very good sign and you shouldn't be disappointed. The favourite flavours in Sicily are pistachio and almond. In summer you can enjoy a granita.

Lost in the middle of the waters and winds, Sicily proudly holds on to this image: they are the Sicilians, the others - those from the mainland - are the Italians. Marginal and original, it is the crossroads of Byzantine, Arab, Spanish and Norman cultures, and remains open to Africa and the East, turned towards the sea

A Mediterranean crossroads, Sicily is a melting pot of the Arab, Byzantine and Norman cultures that occupied it in the Middle Ages. An Arab-Norman culture developed: the court of Roger II of Sicily, who spoke Arabic, included Muslim poets and scientists. Nine Arab-Norman buildings are listed by Unesco.

In Sicily, Greek mythology is important. Persephone was kidnapped by Hades in Enna. Charybdis, the daughter of Poseidon, almost sank Ulysses in the Strait of Messina. The forge of Hephaestus was in Etna, and Aeolus, the god of the winds, resided in the Aeolian Islands. As for Dionysus, it was in Sicily that he discovered the vine

The "law of silence" in Sicilian. This is THE rule in the mafia, but also in general: on an island, everything is known! The Sicilian proverbs say it: "He knows a lot who can keep his mouth shut", "The best word is the one you don't say". And for those who don't understand: "If you want to live, don't get involved in too many things. »

Everywhere in Sicily, and especially in summer, siesta time is sacred, and if the shops can stay open until 1:00 or 1:30 pm, there is no question of opening the eye and the door before 4:30 pm. This is an opportunity to wander around the city and enjoy this magical moment of calm. Beyond that, the city comes alive with its inhabitants.

The tonnara is a small fortress on the sea used for tuna fishing. The fish were trapped there in cages according to an Arabic method from the 9th century. Roberto Rossellini shows it in Stromboli. For a long time, this tradition was the only income for many Sicilians. Nowadays, the tonnares are renovated into hotels, restaurants, bars...

The flag of Sicily, with a head and three legs (the Trinacria - from the Greek treis àkra, "three promontories"), comes from the myth of the fisherman Nicola, nicknamed Colapesce. He had discovered that one of the three columns supporting Sicily had been devoured by the fire of Mount Etna. He decided to stay underwater to support the island.

A volcanic land, Sicily is under constant threat of new eruptions. Stromboli, Vulcano and the most famous of them all, Etna, are still going strong. The latest eruption, in February 2021, was particularly spectacular: the lava fountains and flows were clearly visible at night from Catania.

You speak with your hands! It's practically a parallel language. For example, turning a finger against your cheek means: buono (good). And even when you make a phone call, you join the gesture to the word. Perchè no?

You go to mass. Quite often, and if you are old enough, you will even burn a candle regularly to thank the patron saint of the town! You are invited to many weddings and you go to them in a suit or elegant dress.

You have a scooter. If possible, an old, colourful Vespa, the legendary scooter that is so characteristic of the Italian dolce vita from Piaggio. You can easily navigate the narrow pedestrian streets of historic centres and you have a lighter helmet in the summer

You love strolling down the street, chatting with the elderly who have put out tables, chairs and television on the pavement, with the children who play...