Every year it's the same story, we dream of a Christmas under the snow and on D-Day, not a shade of a snowflake! This winter, pack your bags in search of the cold: the 10 destinations we have selected are among the snowiest in the world. From Russia to Estonia to China, these cities wear their most beautiful white coats in winter and offer a magical setting, the opportunity to take sumptuous photos and memorable snowball battles. Hats, scarves and gloves are essential!

Siberia, winter in all its splendour

Siberia is characterized by its particularly harsh climate: while the heat can be stifling in summer, winter is cold and particularly snowy. From Irkutsk, the region's treasure is discovered: Lake Baikal, one of the largest freshwater reserves in the world. In winter, it is completely covered with ice and can be walked, snowmobiled or skated. It is also possible to fish after having pierced the ice!

Finland's capital is one of the snowiest cities in Europe every winter. Bordered by the Baltic Sea, divided into several islands, Helsinki freezes its decor in the ice, under a thick white coat when winter arrives: and what a sight! On the frozen sea, many activities are available such as towed snowboarding or ice skating. Continuing your journey to northern Finland will allow you to taste the polar cold in Lapland

Sapporo, the capital of the island of Hokkaidō, in Japan, is covered every year with a thick white coat. In February, we discover the Yuki Matsuri festival dedicated to snow and ice sculptures. During 15 days, the city is invaded by more than 250 ephemeral works that sometimes exceed 250 m! The show is impressive. To warm up, a visit to the Sapporo beer museum will make you discover one of the city's specialities, its eponymous beer

Minneapolis, a city to discover

In the United States too, it's better to wear large sweaters when winter comes, especially in Minnesota! In Minneapolis, the spectacle of the legendary frozen Mississippi is impressive, as are the city's various lakes where you can skate or practice ice fishing after drilling a hole in the ice. Minneapolis also houses interesting museums, such as the Weisman Art Museum, to warm up while learning!

Tallinn, pearl of the Baltic

Tallinn, Estonia's capital, is a city to be discovered in winter, when snow covers its Old City and dresses its impressive Alexander Nevsky Cathedral. During the Christmas season, Tallinn is sparkling: whitened by snow and lit by its gigantic Christmas tree, first installed in 1441! Various activities are offered during the winter: from the Old Town skating rink to cross-country skiing at the Nõmme sports centre

In eastern Canada, the island of Newfoundland is still a well-kept secret. Wild and authentic, it conceals grandiose landscapes that turn white as soon as winter, often harsh, approaches. Classified as a UNESCO World Heritage Site, Gros Morne Park is one of the island's jewels. Its sumptuous landscapes and varied fauna are worth a visit. In winter, the park is covered with snow and is used for cross-country skiing or snowshoeing

Where can you find snow in winter if not in one of the northernmost capitals in the world? In Reykjavik, there is no question of hibernating when the cold arrives: many activities are possible such as diving into the icy waters of Nauthólsvík, the city's geothermal beach, before relaxing in its hot spring or going on a horseback ride. It's also the ideal time to admire the Northern Lights, so enjoy it!

You put on your boots and your hat, winter in Quebec is harsh, but it's one of the most active seasons of the year. Ice rinks, cross-country skiing, dog sledding, ice fishing and festivals of all kinds, get ready for a busy winter! The national parks under the snow have adopted a new face and display a protected nature that is a delight to discover along the many hiking trails

In northern China, in the province of Heilongjiang, Harbin seems, at first sight, rather gloomy, despite its interesting architecture combining different styles: Gothic, Byzantine or Russian. However, when winter arrives, the city turns into a real icy paradise with its festival of ice sculptures and snow. This annual event has been held since 1963 and features outstanding works made of ice from the Songhua River

Capital of Greenland, Nuuk offers splendid landscapes when the white of the snow contrasts with the bright colours of the facades of the houses. A Viking and then an Inuit territory often unknown, Nuuk is worth discovering, both for its sumptuous landscapes and its history. Its picturesque little port is a real postcard of Greenland, dominated by the majestic Sermitsiaq mountain, the city's symbol 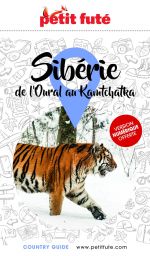 10 animals in danger, to discover and protect before it is too late…

Every day, new animal species disappear. In question? The devastation made by human beings in their places of life. ...

The 10 Things to Do Absolutely in Siberia

N ° 10 - Snowmobile through Lake Baikal frozenDiscover this area of Siberia admired as well as winter, and at all speed ...

The Black Forest, a gourmand paradise in a greenery

With its lush green valleys of crystalline lakes, its dark wild forests that cling to the mountains and its waterfalls, ...