What to see, what to do Armenia? 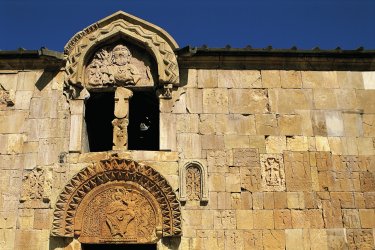 What to visit Armenia ?

Due to the Covid-19 pandemic, entry and travel restrictions may apply Armenia. Remember to visit the site of the Ministry of Foreign Affairs before you leave for the latest information
Practical information for travel Armenia
Formalities Budget Horaires Getting around Gastronomy

Although Armenia is not very large, the terrain makes the distances longer and you can't go around it in a few days. But with the development of infrastructures, one can leave alone, or with the help of tour operators, to travel the roads of the country, and make stops, at hotels or at local people's homes, to discover its richness. The resources of the heritage are such that one can reconcile long hikes in virgin natural sites with the visit of monasteries lost in the mountains, whether one is a lover of ecotourism or pilgrimage. A land of wine, Armenia also has its wine route, which leads from the wine bars of Yerevan to the vineyards of the Vayots Dzor mountains. Other local products will be the alibi for gourmet stops, but the mountains are never far away, offering a wide range of sporting activities...to burn calories! Here are a few ideas for your stay...

Excursion around Yerevan, capital of Armenia

At the Sources of Armenian Spirituality

At the foot of Ararat, 30 centuries invite us to discover this miraculous country of a rich and cruel history that has left us with jewels of a profuse Christian architecture, in their mountain setting at the origin of a great diversity of landscapes. Proud of their history, the Armenians have countered these setbacks by building, between East and West, a country respectful of traditions rediscovered after the end of communism, but turned towards the future and the world, to which its diaspora opens, reactivating the powerful link with France. Foreigners are warmly welcomed in this country preserved from mass tourism, where visits to monasteries lost in the mountains within reach of a bustling capital city enamoured of innovation allow the combination of culture and adventure. An overview of the country's characteristics...

The achough (ashik "passionate" in Persian), also known as goussan, are these troubadours who criss-cross the provinces, perpetuating an oral tradition of epics and legends with or without music. Sayat-Nova, who composed in the 18th century in their languages for the princes of Georgia and emirs of Azerbaijan and Persia, is the greatest of the achough

This small flute, a rudimentary apricot tree branch with 9 holes and a reed mouthpiece, is the emblematic instrument of Armenian music. It originally provided musical accompaniment for shepherds in the solitude of the high plateaus. Its undisputed master is Djivan Gasparian who has accompanied pop stars such as Peter Gabriel.

"Hür", the guest; this is how we call the tourist, whom we make it a point of honour to treat as such, according to the criteria of a legendary hospitality, which may seem insistent in the countryside, where it is frowned upon to refuse to share the table that we propose to the guest. In Yerevan, hospitality follows more conventional forms.

Spikenard is considered to be the favorite pastime of Armenians. Nothing beats a game of nard (backgammon, trictrac or medieval jacket), also known by its Turkish name of tavlou, while sipping a glass of oghi. Armenian cafés often hold these games for their customers, usually men.

Traditional, flat and unleavened bread, prepared according to an ancient practice still in force, whose essential accessory is the tonir, an oven dug into the ground, on the walls of which these large wheat flour pancakes, thin as leaves, are baked. Lavache is omnipresent and is listed as an Intangible Heritage Site by UNESCO

The "Great Catastrophe", an elliptical term used in Armenian to refer to the genocide of 1915. American presidents borrowed it from the Armenians so that they would not have to use the angry word, genocide (which is translated into Armenian as tséghaspanoutioun), when they pay tribute to its victims on April 24 each year.

The "cross-stone" is one of the most expressive symbols of Armenian identity. Thousands of these rectangular stone stelae, decorated with ornate crosses and bas-reliefs, are scattered throughout the countryside, grouped together in cemeteries or at the foot of churches. A lapidary incarnation of the Armenian being, it is listed as a UNESCO World Heritage Site.

Diaspora, or dispersion, the other half of the Armenian identity, living outside the ancestral territory since the massacres and deportations that emptied Western Armenia of its Armenian population in the years 1915 to 1922. The highly organised diaspora of 6 million Armenians maintains close links with Armenia.

Tuff is the Armenian stone par excellence. Of volcanic origin, tuff is most often red, black, pink or orange, and it covers most Armenian churches and monuments, to which it contributes to give them this characteristic and unique aspect. It is also to tuff that the capital, Yerevan, owes its nickname of "pink city"

The centre of monastic life, the monastery. If the presence of monks is attested in Armenia since the most remote times of Christianity, monastic complexes appeared later. The vank's heyday was in the 12th-13th centuries, during the reign of the Zakarians, exemplified by the superb monasteries of Haghbat and Sanahin.

A fabulous animal from Armenian mythology, dragon or snake, which disrupted the universal order before the god Vahagn overthrew it. Some vichap have survived in the mountains, in the form of archaic sculptures representing fish, dating from the megalithic period. Vichap are also an ornamental theme in Armenian carpets.

A religious and ethnic minority, speaking Kurmandji and practising a cult inherited from Zoroastrianism and Manicheism. A persecuted nomadic pastoralist people, they are settled in Armenia where they have found security that allows them to freely practice their religion. In 2018, they inaugurated the largest Yezidi temple in the world.

You are not required to sign in front of churches, which are holding out their arms, as long as yours are covered

One must do honour to the table that receives, toast the table, listening to the tamada singing your praises and those of the country, before dancing the kotchari. This applies to the restaurant, where it is frowned upon to quibble about the bill

And for purchases, if you're in the East, you don't have to haggle much. In Yerevan, the "bobos" frequent wine bars and clubs, but in the summer, you laze on the terraces, where you play nard, before slipping into a chavourma at the corner of the street

Armenians have become adept at social networking, and they allow themselves to be photographed, but only moderately, especially when they are notables, police officers or soldiers, especially in strategic locations

Although Armenia is a very safe country, it is nevertheless in a conflict zone, and caution is called for on the borders of Azerbaijan and in Karabagh. The authorities also prohibit access to risk areas.