Going on holiday in Laos means discovering a country with many facets. The tourist guide of Laos takes you to discover exceptional historical sites such as Vat Phou, a UNESCO World Heritage Site in Champassak province, but also the capital, Vientiane, which is certainly less frenetic than Bangkok, and which nevertheless reserves its share of surprises and entertainment. Laos also has many other assets that make it an exceptional destination: the landscapes, first of all, preserved and of extreme beauty, the mountains to the north, the Mekong River that flows peacefully through the country, the lush rice fields, the small villages and ethnic minorities, a still unexploited tropical forest, the magnificent Nam Ha reserve and the magnificent Kuang Si falls. So many wonders waiting for you.

What to see, what to do Laos? 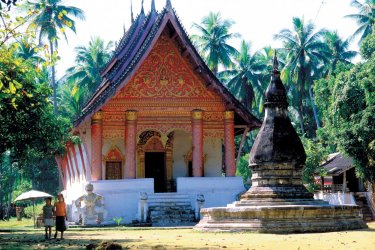 What to visit Laos ?

When to go Laos ?

The best time to travel to Laos is from November to March. The temperatures are pleasant, it doesn't rain and if you go to Laos between these two periods of the year, you can attend many festivities. In Laos, the high and low tourist seasons coincide with the dry and rainy seasons. The high tourist season therefore extends from early November to late April during the dry season. While the tourist low season falls in the middle of the monsoon season in Laos, from April to the end of October. Even if the dry season has its advantages, going out in the middle of summer (European) can be just as attractive. The landscapes are different, from a bright green from north to south, some fruits and vegetables only appear during this wet period

Due to the Covid-19 pandemic, entry and travel restrictions may apply Laos. Remember to visit the site of the Ministry of Foreign Affairs before you leave for the latest information
Practical information for travel Laos
Formalities Budget Horaires Getting around Gastronomy

Laos offers a range of tourist attractions: majestic mountainous landscapes, preserved biodiversity, centuries-old ethnic traditions, colourful pagodas, and a myriad of outdoor sports activities (trekking, kayaking, canyoning, tubing, climbing...). The country is not very big but getting around is not easy, road infrastructures are not very developed, except for the connections between the main cities. Wanting to go around the country in two weeks would be a heresy, it will be necessary to target the desired places according to the air links in order not to lose too much time in transport. Two weeks is the minimum to enjoy your trip. If your stay is shorter, it is better to restrict travel to take full advantage of the places. For a longer stay, you can combine the proposed tours.

One week : discovery of Vientiane and Luang Prabang

Between villages and ethnic minorities: 15 days in northern Laos

How to go Laos

Although reserved, Laotians remain open and welcoming towards foreigners. Laos is one of the safest countries in the world. In principle, there is no violence against foreign tourists. It is a peaceful destination where it is good to travel. Be careful if you rent a vehicle, accidents are frequent so check the insurance clauses when signing the contract

Laos is a destination offered by most tour operators. To really enjoy the destination, we recommend a tour of at least ten days otherwise you risk flying over the country too quickly and not really soaking up the destination. You can easily make a grand tour of Laos in 12 days or opt for a thematic stay along the Mekong River or in immersion with the Laotian ethnic groups.

Domestic flights serve the country well and are generally cheap. With 4,600 km of waterways, Laos can also be visited by boat, but with the development and improvement of road networks, this picturesque mode of transport is disappearing. Long-distance buses are cheap and fast.

Laos is a popular destination for its sublime landscapes, but also for its culture, traditions and population. This chapter presents the various facets of the ancient "Kingdom of a Million Elephants", its cultural specificities, its fauna, its flora, its gastronomy, but also its fascinating history. This landlocked country has been a real crossroads of influences between its neighbours China, Thailand, Vietnam and Cambodia, and is home to a great ethnic diversity that forges its identity and culture. Although threatened, the Asian elephant remains an inescapable pillar of Laotian culture. If the country preserves ancient traditions such as Buddhism and animist practices, its history is marked by the Indochina wars and the seizure of power by the Marxist party, the Pathet Lao. The French have also left an important cultural and architectural heritage.

The kingdom of elephants

The neighborhoods of Vientiane

The districts of Luang Prabang

Popular ceremony in which spirits are addressed for all the important events of a life: birth, marriage, illness, death... This ritual would allow the 32 souls that an individual possesses to come back, according to Lao tradition, and thus allow the recipient of the ceremony to benefit from their positive influences.

Laotians are very proud of their brand of beer, a national product that is a real institution in Laos! It is sold in bottles and cans, and 90% of sales are made in Laos. Laotians drink it very regularly, cold or not so cold, often with ice cubes (yes, yes, sooner or later everyone gets used to it!).

This word designates the community of Buddhist monks in Asia, but their social importance is preponderant in Laos. All men, whether children or adults, can make a religious retreat during a variable period of their existence before reintegrating into civil society. This religious order is deeply respected by the population.

Lao expression meaning "no problem", "it doesn't matter", or even "you're welcome" ... And so many other things that Laotians and foreigners use it very often, in all sauces. This expression represents somewhere a philosophy inspired by Buddhism, a Laotian state of mind... To be used without moderation!

The ancient name of Laos, Lane Xang, means "Kingdom of a Million Elephants". Nowadays, the country is said to have less than 1,000 wild elephants, 500 of which are domesticated. Admiring these animals is one of the main tourist attractions of the country, and many camps offer the opportunity to interact with the elephant with the utmost respect for the animal

Close to the Thai pronunciation "farang". For the Laotian population, the falang represents the Westerner, the white tourist or expatriate. Yet in the Laotian language, "falang" or "falangset" refers to the French population, as it was the first Europeans that Laotians saw, by habit, this expression has remained.

You won't be able to cut off the tasting of this traditional alcohol made from fermented rice, of artisanal or industrial manufacture. It is customary to offer some to guests passing through. It is now part of any tourist menu offering to discover the Laotian gastronomy, in shot to open the appetite, or as a digestive. Hot!

Laos has no less than 49 different recognized ethnic minorities. It is important to know that the term "minority" is not pejorative, it is in common usage. Diversity is more important in North Laos. The government has identified three categories (where various ethnic groups are listed): the Lao Loum, the Lao Theung, and the Lao Lung.

Means "market". In Laos it is mainly a meeting place. The markets offer a mixture of fragrances, flavours, local products and culinary specialities... It is the ideal place to take the pulse of a city or a village. Some markets are frequented by local minorities dressed in their traditional costumes.

Means "stupa" in Lao. They are pyramid-shaped funerary monuments that house the ashes of the deceased or Buddhist relics. In the capital Vientiane, you will surely visit the unavoidable Pha That Luang, the largest that in the country, a true national emblem which would shelter, according to the faithful, the sternum of Buddha.

An important tradition in Laos; there are many famous weaver villages. Decorative hangings, sin (skirts) or pha biang (silk or cotton shawls) are very popular with tourists passing through. The methods of manufacture differ according to ethnic groups, and the colours used are often characteristic of a region.

This word means "pagoda" or "temple". Each village or town is home to one or more vat . In Laos there are about 2,800 of them. The most sacred Buddhist vat are in Vientiane and Luang Prabang. A vat often consists of a prayer room containing one or more statues of Buddha, and a stupa (or that)

You absolutely respect the religious order and the monks, who must not be in contact with women. Beware of overly demonstrative photo shoots in the precincts of sacred places.

You take off your shoes before entering people's homes or entering a temple.

You cover your legs in a vat (no shorts or miniskirts). Ladies, you wear a long skirt and not trousers at traditional feasts or official events.

You do not criticize food offerings made in a temple or placed in front of a "house of spirits".

You greet by joining the palms of your hands together at chin level, and bowing slightly forward (nowadays, men can shake hands). Younger men greet older men first.

Avoid taking the initiative, except in the presence of a monk, elder or administrative officer whom you want to thank