Rasta mania! A Caribbean island, south of Cuba, close to the Dominican Republic, lush Jamaica offers us its mountains, forests and reef-lined beaches. Most of the seaside resorts are located in Montego Bay, whose romantic refinement of English colonial architecture is appreciated, and Negril, which is well known to scuba diving enthusiasts. But most of all, Jamaica is the cradle of reggae music, you won't escape it! Kingston, its capital, is home to the Bob Marley Museum, dedicated to the king of reggae. Jamaica has another god in the person of Haile Selasse I, former emperor of Ethiopia, Rastafari Makonnen, idol of the Rastafari movement, a branch of Christianity for which Jesus is not the Messiah, but Rastafari Makonnen. Jamaica also has a natural jewel with the Blue Mountains where coffee trees grow, giving the best coffee in the world. Another characteristic of this country is that it is a flag of convenience, meaning that it is a tax haven for shipowners. But all these considerations are far from those of tourists who came there to enjoy the sun, the sea and nature, the turquoise waters and the emerald forest. Another delight of the island: the local cuisine and beers. Toast on the beach while enjoying the moment and the air of the times.... Isn't life beautiful?

What to see, what to do Jamaica? 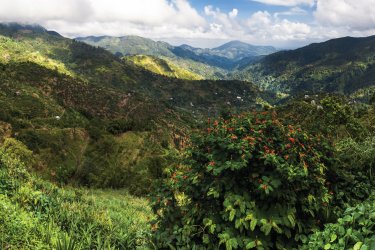 What to visit Jamaica ?

When to go Jamaica ?

The high tourist season is from December to April, it is the most pleasant period because it is the least hot and sunniest. Hotels and beaches are crowded and prices are higher. From May to August, temperatures are a little higher, the air is more humid, and late afternoons are often cloudy and sometimes rainy. Travelers who like peace and quiet will appreciate leaving around mid-September. The weather is rather mild with reasonable temperatures but especially the high tourist season is already over, the crowds are less crowded and prices are considerably lower. The low season is from May to November, it is the hurricane season, from June to November, so avoid it.

Reggae fans will be invited to Sumfest Reggae: the world's largest reggae concert is being held in Montego Bay in mid-July

Another important date: Independence Day (August 6). Each year, Independence Day is celebrated with passion all around the island, and particularly in Kingston, with a large floating parade and a gala concert.

Due to the Covid-19 pandemic, entry and travel restrictions may apply Jamaica. Remember to visit the site of the Ministry of Foreign Affairs before you leave for the latest information
Practical information for travel Jamaica
Formalities Budget Horaires Getting around Gastronomy

A week in Jamaica

How to go Jamaica

It is common to go to Jamaica alone. The rules of vigilance are the same as elsewhere: from a certain time onwards, favour taxis, do not show any external signs of wealth, avoid being unpleasant or aggressive. In general, tourists are very well received and tourism professionals are always ready to help and provide good advice. However, in the evening, in some hot places it is better to be accompanied by local people

Many tour operators include this destination in their catalogue, more or less cultural, more or less seaside, some around hiking, others around diving, others for families, with or without a guide. Organized trips to Jamaica are reserved for well-stocked scholarships.

Regular domestic flights between Kingston and Montego Bay. Kingston has large buses that make up the public network, as well as private minibuses. In the rest of the island, it is mainly minibuses, or vans, that connect the cities. A famous bus line, Knutsfort Express, makes twice daily trips from Kingston to Montego Bay via Ocho Rios. Also route-taxis, collective taxis. We drive on the right in Jamaica. Driving can be dangerous, especially at night.

Jamaica, a vibrant destination in the heart of the Caribbean

Jamaica is a truly exotic destination, as exotic as it gets and unknown to most French people. We know little (if anything) about its history... Try to name national heroes of the Independence, leaders of slave rebellions or local pirates, it's difficult! Discover a beautiful Caribbean island with a varied geography, its wild Blue Mountains full of spectacular flora and fauna. What are the current and environmental issues facing the island today? Discover its inhabitants, their way of life, the history of reggae and Jamaican music, the religions, the local films, the great cultural diversity of this mixed island, where West Africa is omnipresent in the traditions as well as in the history of this country where 90% of the population is black, mostly descendants of slaves, and where 10% of the population is Rasta.

This yellow and brown fruit is cooked, among other things, with salted cod, it is the national breakfast. Visually, it looks like scrambled eggs. Symbol of the island, it grows on theakesia, introduced in the 18th century by slaves from West Africa. It opens when ripe and is picked with a long hooked pole.

In Jamaica, dominoes are not only a game, but a real "national sport". It is played on a wooden table. Around the table, four players compete to impress each other verbally and keep each other in line by forcefully hitting the pieces on the table. It is also a ritual of family Sundays

Jamaica is home to many churches, mainly Protestant, Methodist, Anglican, Orthodox, Baptist, Presbyterian and Seventh Day Adventist to name a few. Jamaica would also be the country with the most churches per capita! Don't miss a Sunday service for its gospel songs.

The forest is omnipresent on the island, you will not fail to admire the foothills of the country's mountains covered with this lush, tropical and wild vegetation. It covers nearly a third of the island's surface, i.e. nearly 340,000 hectares, including 88,000 hectares of primary forest still intact. On the coast, the forest is drier

Marijuana - weed, collie, lambsbread, kingsbread, sensi, bush herb, I-grade, sativa - is an integral part of Jamaican society. Its cultivation and consumption are authorized since 2015 (officially on prescription for tourists). If the rastas are associated with it, many Jamaicans smoke more or less regularly

This is how these Jamaicans are called and how they present themselves. They live from an informal tourist economy, based on the sale of everything and anything: car wash, drug sale, visit of a city or a district... The opportunity to collect a little money. They gravitate to the tourist sites from Ocho Rios to Negril

This cooking method inherited from the Maroons was born in Boston Bay. Today, it can be found literally on every street corner. The chicken or pork is marinated in Jamaican jerk spices (chili, pepper, cloves, cinnamon, nutmeg, thyme...) and then grilled on a barbecue of pimento tree branches and smothered

It is the name of a legendary Jamaican pirate who ruled the island in the late 17th century. He was even once "king of the pirates of the Caribbean". His name was given to a black bird reminiscent of a raven, and more closely a vulture. There is always a John Crow circling in the sky, to remind us that the pirate is watching

Jamaica is a paradise for honeymooners and express marriages! After 24 hours of presence in the country, you can claim to be married, provided you provide the necessary documents. Many hotels offer all-inclusive wedding packages. Beware: if it is easy to get married, it is difficult to get divorced!

Born from an exceptional musical context, from the hybridization of local mento, soul, rock and traditional African percussions, this musical style crosses the times. Jimmy Cliff, Bob Marley, Dennis Brown, Gregory Isaacs, Black Uhuru, The Gladiators... have left a legacy: Jamaica is the country that produces the most records per capita!

Born in the 1950s in the ska, rocksteady and roots street parties of the Kingston ghettos, they were built from a generator, a truckload of speakers, loudspeakers and DJs at the decks. Today, the sound is dancehall and dub, they stand out with their walls of speakers during soundclashes between crews of DJs and MCs.

It is the movement of the basin of the queens of Jamaican dancehall. Each hit is accompanied by its movement, inseparable from the lyrics. At each session, dancehall queens and groups of dancers compete with inventiveness and originality with variations of dutty wine (head rotation) or Beyonce wine (pelvic swaying).

You say "Yamon!" as a punctuation mark, to every sentence. "Yamon" (indiscriminately addressed to a woman or a man) simply means "yes," but it expresses much more: on its own, this interjection manifests the enthusiasm and exuberance of the Jamaican people. You also tend to say "no problem" a lot, and this phrase has become an emblem of the country

You are often late and you write "soon come" to say "I'll be right there", but that should be interpreted as "I'll be there in a minute at the earliest, at the latest... go figure."

You specify your parish to refer to where you are from. This does not say much to the tourist who barely knows the names of the big cities of the island but here it is very significant in Jamaica.