The Azores archipelago is an autonomous region of Portugal located two hours' flight from Lisbon in the North Atlantic Ocean. It will delight lovers of hiking and wilderness, far from the crowds of mass tourism. This still little-known destination is made up of nine islands of volcanic origin, each with its own dominant colour (the blue island of Faial, the black island of Pico, the green island of São Miguel, the red island of São Jorge, etc.) according to its geological characteristics. From São Miguel, the large island with twin lakes, to the tiny Corvo, from the Pico volcano, the highest point in the archipelago (2,351 m) to the geothermally heated natural pools of Ponta da Ferraria, the programme of excursions is incredibly rich. Travel from island to island in the Azores tourist guide, amidst thousands of hydrangeas, to the immense caldera of Faial, the black sand beaches of Ribeira Quente, the endless chasms of Terceira, the breathtaking waterfalls of Flores, the turquoise blue lagoon of Santo Cristo, the lush garden of Terra Nostra, not forgetting a stopover at the world-famous port of Horta, a stroll through the historic streets ofAngra do Heroísmo or a chance to watch the cetaceans that cruise the area.

What to see, what to do The Azores? 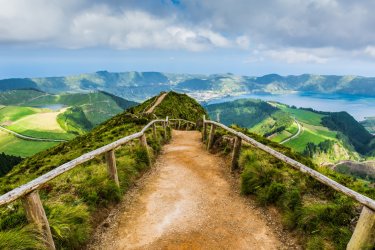 What to visit The Azores ?

When to go The Azores ?

The best time to go to the Azores is between May and September: the weather is rather stable, it is hot, the sea is at an ideal temperature. To enjoy the advantages of summer while avoiding, as far as possible, its disadvantages, the months of May, June, and September are to be preferred. That said, winter can also bring its share of good surprises to the Azores: from December to February, camellias are in bloom, azaleas brighten the landscape in February and there are even fewer tourists on the islands.

Due to the Covid-19 pandemic, entry and travel restrictions may apply The Azores. Remember to visit the site of the Ministry of Foreign Affairs before you leave for the latest information
Practical information for travel The Azores
Formalities Budget Horaires Getting around Gastronomy

The Azores are made up of nine islands, which implies some compromises in terms of transport. Not to mention the climatic conditions which can sometimes delay - or even cancel - a plane or a boat, and cause precious time to be lost in transfers. In winter, the weather is the main enemy, but in summer the flights are quickly full and it is wise to book your seats well in advance. To make matters worse, the summits may still be under the mist and thwart your plans... Making a choice is therefore inevitable: it is impossible to visit the whole archipelago in a week, or even a fortnight, even if it seems conceivable. It would be such a pity to run after the watch in such a peaceful environment! In order to make the most of the wonderful hikes, it is recommended to stay for a good while in the same place. Nature is only known by walking, let's never forget it.

São Miguel in one week

How to go The Azores

The nine islands each have an airport. The most important is João Paulo II, located on the island of São Miguel. There are no or very few direct flights to the Azores, regardless of the departure destination. After a stopover in Lisbon or Porto, you can land at Ponte Delgada (São Miguel Island), Horta (Faial Island), Madalena (Pico Island) or Lajes (Terceira Island).

Many agencies organize tailor-made tours in all the islands of the archipelago, as well as thematic stays. Some of them offer twelve days of trekking and cetacean watching on the islands of Faial, São Jorge, Pico and São Miguel. You can also opt for a diving stay. Customised online travel platforms can also put you in direct contact with a local guide before departure, in order to provide you with a tailor-made stay

There are many regular maritime and air links between the nine islands. However, a trip to the Azores cannot be improvised, neither in winter nor in summer. It is more prudent to plan inter-island trips and anticipate that planes, boats and car rentals may be full. On land, the bus network is not very dense and the best solution is to rent a car because the roads are paved and in good condition.

The Azores, a Portuguese archipelago between ecotourism, water sports and hiking

Staying in the Azores to observe cetaceans

The Azores, a hiking and biking paradise

Scuba diving in the Azores

In the middle of the Atlantic Ocean, halfway between America and Europe, the nine islands of the archipelago have a singular character. Everywhere the ocean, fringed with the foam of its waves, gives a glimpse of the infinite. A true ecological paradise, the Azores are a haven of peace whose colors fascinate the traveler. The multiple shades of green of the islands are enhanced here and there by the persistent blue of the hydrangeas that line the roads and paths. All the colors are amplified by the sun that pierces the clouds. The volcanic origins of the archipelago offer spectacular landscapes, from the caldera of Sete Cidades to the 2,351 meters of Mount Pico. Jagged basalt coasts and emerald lakes will delight the hiker in search of a wild and preserved nature. Everywhere, among the innumerable treasures that each of the islands conceals, there is a treasure that you will have to go and flush out.

Pictures and images The Azores

The 12 keywords The Azores

Introduced by Portuguese settlers, the pineapple has become the flagship of Azorean agriculture and the symbol of the archipelago, particularly São Miguel. It is smaller than the African or Caribbean pineapple. Its acidity, more marked than that of its Caribbean cousin, enhances its aroma and makes it one of the best fruits that can be tasted here.

The Azores High, whose name often appears in weather reports, is, like morning fog, sometimes dissipated. When it is centred right on the archipelago, it is not a guarantee of good weather on the spot; it is better if it is a little bit off course. On the other hand, it is a barrier against bad weather and rain in Europe

A mythical animal of the Azores, the whale - more exactly the sperm whale - was still hunted, especially in the islands of the central group, in 1987. Today, they are protected and especially observed by tourists. Horta is the most suitable place for this activity; the marine corridor of the central archipelago is indeed the richest in sperm whales

Each island is associated with a color, related to its characteristic and history. São Miguel is known as the green island, Faial is blue, Graciosa is dressed in white, Santa Maria sees life in pink, Flores wears a yellow shirt, it is brown for São Jorge and lilac for Terceira while Corvo is gray and Pico is draped in black

Spectacular tree with red sap with medicinal virtues (hence its name, associated with the blood of the dragon), often a hundred years old, very protected by the inhabitants, originally from Cape Verde. Visible at the edges of the paths, it is the symbol of the absence of pollution. The main square of Santa Cruz de Graciosa presents an exceptional and magnificent ensemble

Here, there is no lack of churches! It seems that for the Portuguese, any opportunity was good to build one. When they set out to discover the world, every time they set foot on land, a church would appear. When they survived a storm, a church. To make up for not having pitied the pirates, a church..

A culinary pride, especially in São Jorge, where the succulent baked cow's milk cheese comes from. Similar to Gouda, and very tasty, it undoubtedly has its origins in the know-how of the Dutch settlers of the archipelago. Go to one of the agricultural cooperatives to discover its manufacturing secrets and go shopping!

Originally from Asia and introduced to the island by the Portuguese, this magnificent grove decorated with pink, lilac and violet flowers has become a true mascot of the archipelago. The hydrangeas thus give their unusual and romantic character to the island's landscapes. They bloom from the end of May to the end of August and can reach colossal sizes

Numerous, the mills of the Azores are an architectural testimony of the arrival of the first settlers from Flanders. They vary from one island to another and often have a surprisingly northern look for these subtropical islands. You will see them during a hike in Graciosa or Faial in particular; and you will notice their red domes

Putting on your sneakers and going for a walk along the Azorean paths is one of the activities that will leave you with the most beautiful memories. Marked trails, geographical proximity of towns and villages: nature, volcanoes, lakes and waterfalls are perfect for hiking and walking. Beautiful surprises on each of the nine islands

As surprising as it may seem, the Azores are the only place in Europe where tea is grown. Perceived as a judicious alternative to the orange culture, in serious crisis in the 19th century, the first plantations were established in São Miguel. Today, two factories open their doors to you, in Porto Formoso and in Maia

The tectonic activity is felt everywhere in the Azores! Volcanism has left fascinating traces here: Mount Pico, the highest point in Portugal at 2,351 meters; on São Miguel, the fumaroles of Furnas lake or the crater lakes of Fogo or Sete Cidades are marvels. On Faial, the volcano of Capelinhos was born... in 1958!

If you have downloaded the "Windy" application on your phone: we can't tell you enough, the weather is capricious in the Azores and the best way to know the color of the sky and the strength of the wind is to follow the weather conditions on the "Windy" application. All the inhabitants refer to this application. Even if it is not infallible, it is still the most accurate way to know when and where the rain will appear!

If you are traveling with only carry-on luggage: suitcases that don't arrive at the same time as you do are more than usual in the Azores. Here, we travel with hand luggage, which we keep carefully with us.

Other destinations The Azores