The Mediterranean Sea is full of treasures where it is good to land. So don't hesitate to board a Mister Ferry boat to sail to Corsica or the Balearic Islands. Unless you head east to discover Sardinia, the island of Elba, Sicily and the Aeolian Islands scattered around the Italian boot. The Maltese archipelago and the Greek islands, from Crete to the Cyclades via the Dodecanese islands, are all ports to discover. Cast off!

From Corsica to the Balearic Islands

A small jewel in the heart of the Mediterranean, Corsica is a leading holiday destination. The Island of Beauty is an enchanting and surprising land. A mosaic of natural landscapes as multiple as they are contrasted, between high altitude lakes fringed with pine trees, granite canyons, fine sand creeks lined with crystal clear waters or impenetrable scrub. Not forgetting its heritage, its customs and its rich gastronomy in all seasons.

Then head south towards the Balearic Islands! Mallorca, which is home to the capital of the archipelago, has many surprises in store with its cultural wealth and picturesque relief. The formidable architecture of Palma takes us on a journey through the centuries, while the extraordinary creeks and untamed peaks of the Tramuntana force us to be humble. Classified as a Biosphere Reserve by UNESCO, Menorca, a more traditional city, has managed to preserve its essence: it fascinates with the splendour of its beaches, its natural parks and its multitude of prehistoric sites. Ibiza is undoubtedly the most intriguing of the islands because of its contrasts. Since it was discovered by hippies in the 1960s, it has been known for its sleepless nights, sexual freedom and artificial paradises. Although this reality does exist, the island has an inexhaustible potential, from sports activities to gastronomic discoveries, not to mention agrotourism, which is booming. Finally, the sparkling Formentera has, like Ibiza, been populated by hippies. On one side, pleasure boats pass by, and on the other, flamingos and other migratory birds that populate the old saltworks. Its coves of incomparable purity and tranquillity make it one of the last edens in the Mediterranean

Imagine a little corner of paradise where the fragrant maquis flirts with turquoise waters, between Corsica and Italy. Imagine an island where the inhabitants have the sincere welcome of the rural population. The island of Elba, the beautiful exile finally quite unknown to the French, responds notwithstanding our dreams of the Mediterranean. This "little Italian Corsica", rich in colours and perfumes, rises from the depths to form a precious pearl of the Tuscan archipelago within ferry reach

Then it's time for Sardinia, one of those Mediterranean islands with a marked character that reserves countless wonders. Prized by the Italians for its beaches, almost its entire coastline is breathtaking. The water is warm and clear, the coast is varied, sheltering cliffs, underwater caves and myriads of fine sandy beaches. And the inland is even more amazing! It has a surprisingly diverse landscape, mostly of medium mountains.

We then dock on the most famous of the Italian islands: Sicily. Sicily is first of all the breath of an emblematic volcano: Etna, the highest volcano in Europe and one of the most active in the world. At 3,350 metres, it discovers its four gigantic summit craters in clouds of sulphur. The Sicilian way of life is in stark contrast to this spectacle. The villages with their narrow streets full of mauve and pink bougainvillea, flowering laurel and lemon trees that descend to the blue waters of the Mediterranean. Sicily is also rich in all the populations that have succeeded one another, endowing it with an original and fascinating architecture: Greek temples in Selinunte, Syracuse and Agrigento, Arab-Norman palaces and Byzantine churches in Palermo, medieval villages perched in the mountains

And the islands that surround Sicily are precious satellites: the seven famous Aeolian wind turbines with the luxury of the rich Panarea, the eruptions of Stromboli the volcanic or the archipelago of the Egadi Islands

From Malta to Crete

Crystal-clear waters, medieval citadels and megalithic temples are the three treasures of Malta, an island located in the centre of the Mediterranean Sea. Travelling through Malta will take you from the steep cliffs of its coastline to the quiet lanes of its medieval cities like Mdina and Victoria and the Renaissance splendours of Valletta. Or plunge into the fascinating corridors of a Hypogeum built in 5000 BC and then admire the Caribbean waters of Comino. The choice is yours!

Anchored in the south of Greece, Crete is rebellious and wild. A stopover that will allow you to set off to conquer a dazzling nature made up of crystalline lagoons, olive trees as far as the eye can see, authentic mountain villages, rocky gorges, perfumes and flavours. Cradle of the Minoan civilization, land of history with multiple legacies, the one we call "the island of the gods" also testifies today to the richness of its past. Pure happiness!

From the Cyclades to the Dodecanese's bits of land

In the Cyclades archipelago, the Aegean Sea is dominated by a thousand churches with whitewashed walls and sky blue domes. Everyone will find what they are looking for here. Those who like to party until dawn will prefer Mykonos and Ios, lovers of paradisiacal beaches will go to Milos or Koufounissi, solitary walkers will hike to Kimolos or Amorgos, anthropologist apprentices will discover Naxos and Sifnos, heritage enthusiasts will marvel at Delos and Keros, modern art enthusiasts will go to Andros and Tinos, extreme sportsmen and women will take to the sea in Paros, and gourmets will delight in the specialities of Syros and Santorini wines. In short, between hidden islands and must-see sites, the Cyclades offer endless possibilities.

And the Aegean Sea also bathes the coasts of Rhodes, Symi, Karpathos, Astypalaia, Patmos, Kastellorizo, Leros, Tilos, Kos, Kassos, Nissiros, Kalymnos or Lipsi, the twelve islands of the Dodecanese. Beyond the mythological seal, these islands are marked by an exceptional heritage and breathtaking landscapes. For example, the old cities of Rhodes and Patmos are classified as UNESCO World Heritage sites, while elsewhere nature offers fine sandy beaches, turquoise and translucent waters, sharp mountains, arid or abundant landscapes and lonely creeks

Useful. To find his crossing(s). 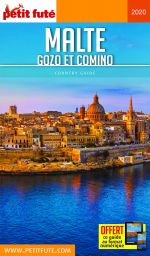 How can we not succumb to the charm of Malta? A delightful archipelago of barely 300 km² made up of three confetti ...