Going to the Balearic Islands on vacation... The destination is a dream! Dream of fine sandy beaches, sun, blue sea and idleness. On the menu: sunbathing, swimming, diving, water skiing and other seaside pleasures. Off the east coast ofSpain, in the Mediterranean, the Balearic Islands archipelago is one of the autonomous communities of Spain. Mallorca, the largest of the islands, is best known for its beaches and picturesque coastline. To the north, the Serra de Tramuntana massif is appreciated by naturalists for its biodiversity and by hikers for its paths that reveal magnificent landscapes. Capital of Mallorca, Palma is home to a Gothic cathedral known for the baldachin of its altar designed by Gaudí. It is also home to the Moorish-style Royal Palace of Almudaina, the magnificent summer residence of Spanish monarchs.

But it would be a shame not to explore the other islands of the archipelago. The second big island is Ibiza, classified as a world heritage site by UNESCO for its built and natural heritage. This island is especially famous for its very festive nightlife. The three other islands, more discreet, do not lack either wealth or charm. Go to the beautiful Menorca, to Formentera, with its small harbor towns, its beaches and quiet coves, and to Cabrera to hike in the natural park of this wild island.

What to see, what to do Balearic Islands? 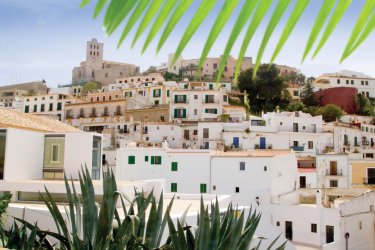 What to visit Balearic Islands ?

When to go Balearic Islands ?

The tourist seasons(temporadas) are divided as follows: temporada baja, low season, from mid-October to May, during which many hotels and restaurants are closed; temporada media, medium season, from mid-May to the end of June and in September; temporada alta, high season, in July and August, and during Semana Santa, temporada extra, very high season from July 15 to August 15, which is the most expensive time to go on vacation of course. Between October and March, most of the hotels, vacation clubs and restaurants in the seaside resorts are closed. Only the big cities like Palma and Eivissa keep a normal activity. It is best to stay in the Balearic Islands in June or September, when the summer crowds are absent and the climate is particularly pleasant. From July 15 to the end of August, prices are tripled everywhere (hotels, restaurants, flights), and as a bonus, the entertainment and village festivals are at their peak.

Due to the Covid-19 pandemic, entry and travel restrictions may apply Balearic Islands. Remember to visit the site of the Ministry of Foreign Affairs before you leave for the latest information
Practical information for travel Balearic Islands
Formalities Budget Horaires Getting around Gastronomy

How to go Balearic Islands

You will have no difficulty in organizing your stay in the Balearic Islands. Many airlines, including low-cost airlines, offer flights to this destination. There are many departures every day during the summer from Paris but also from other airports (Marseille, Lyon, Lille, Nantes, Bordeaux, Brest, Nice, Toulouse, Brussels...).

To reach your hotel or vacation club from the airport in Majorca, Ibiza, Menorca or Formentera, don't hesitate to ask them at the time of your reservation if they don't offer an included transfer to your accommodation

Book your accommodation and air tickets in advance for the summer in order to benefit from the best rates, the best hotels and the best flights to the Balearic Islands. Beware, in Menorca, during the Sant Joan celebrations (June 23), most establishments are fully booked. Make sure you plan ahead for a stay during this period.

Many tourism professionals offer the Balearic Islands as a travel destination with all-inclusive stays of several days, with or without excursions. The formulas are well established, especially for families, with the possibility of half or full board. You will have sometimes in this frame really broken prices. You will be accommodated in tourist complexes more renowned for their efficiency than for their charm. But you will not have to organize anything, everything will be included!

On the Balearic archipelago, it is by boat that we move. You embark to go from one island to another, it is economical and practical. Air links between Ibiza, Mallorca and Menorca exist, but prices are often high. On each island, even if the bus networks are well developed, the most convenient solution is to rent a car, especially to discover Mallorca or to connect the beaches of Ibiza. A bicycle will suffice to travel through the small and eco-friendly Formentera, which is rich in greenways.

Alcúdia, between sport and culture in Majorca

Can Lluc, to discover the rural and authentic Ibiza

Majorca, pearl of the Balearic Islands

Sun for the body, peace for the mind and warmth for the heart at the Hotel Bonsol

It is a daunting task to sum up all the mysterious beauty, the diversity of landscapes and historical influences that have made and still make up the Balearic archipelago. Blonde coves of fine sand or rocky beaches, picturesque fishing ports, mild Mediterranean sunshine, agricultural and bucolic hinterlands, dynamic towns with a mixed historical heritage, subtle marine gastronomy, fiesta until the end of the night... The magnetism of these Spanish islands is nothing new: it has fascinated many civilizations and continues to exert its indescribable power of attraction even today. Let's dig a little deeper and try to draw as accurate a portrait as possible of this unique and lustful area, rural and modern, Catalan and cosmopolitan. The dossiers presented here, from the windmills of Menorca to the history of clubbing in Ibiza, dare to take a wide view of the Balearic DNA

This fashion was born in the 1970s in Ibiza, promoted by the late Smilja Mihailovitch. A contraction of the Latin expression ad libitum ("take the side you like"), Ad-Lib fashion, a harmonious blend of elegance and sophistication, concentrates casualness and freshness, evoking the brightness and youthfulness of Ibiza.

All Spaniards have them on their feet. They look like our espadrilles and are leather-strapped sandals, worn in the past by shepherds, with soles made from old tyres. Originally from Menorca, they are called menorquinas in the rest of Spain. Even the royal family wears them!

Caldereta is a kind of bouillabaisse typical of Menorca, and more precisely of Fornells, a small and charming town in the north of the island. The main difference with the famous French dish is that it includes lobster. The result is therefore much more fragrant... and more expensive. Seafood lovers, you are served!

Ibiza's clubs make it their biggest advertisement: who will have the best DJ... of the night. For years, the Ibiza DJ Awards have been recognising the best DJ of the year. But in addition to the nightclubs, most of the trendy bars and huts on the most popular beaches have their own resident DJs and their own discographies.

The equivalent of our croissants. It's a little bit greasier (made with lard), rolled up like a raisin bread, sprinkled with icing sugar... and it's a real religion! Every tourist goes home with a souvenir box! In the airport departure halls as well as on board the boats, the hexagonal white cardboard boxes are legion.

The hippies arrived on the archipelago in the mid-twentieth century and left their mark on the island, including a weekly entertainment on the island of Ibiza: the hippie markets, including those in Es Canar and Las Dalias, where you can find handicrafts, as well as imported products from Asia and India. Formentera also has several markets.

You will see them on the four Balearic islands. In Mallorca and Ibiza, they are stocky and their wings are short. They are used to collect fresh water from the ground. In Menorca and Formentera, their wings are long (4 or 5 m!) and sophisticated, to capture the wind and make the millstones that crush the wheat grains turn faster.

The Pityuse islands include Ibiza and Formentera, as well as several small islets such as Espalmador and Espardell. The name Pityuse probably comes from pitys, which means pine in ancient Greek. In ancient times, the Pityuses were clearly differentiated from the rest of the Balearic Islands. Mallorca and Menorca formed the Gymesias.

A mixture of Menorcan gin and lemonade, Pomada(French for "pomade "), invented in the town of Mahón in 1967, is a typical Menorcan drink. It is consumed mainly in summer, especially during the patron saint's day, as it is a very refreshing drink! It is of course consumed throughout the archipelago.

Ibiza's salt, renowned for its purity, comes from this natural reserve stretching from Ibiza to Fomentera. Classified as a World Heritage Site in 1999 by UNESCO for its exceptional beauty, the salt flats are also a special protection area for birds, serving as a migration stage for herons and flamingos in particular.

An essential Mallorcan product, sobrassada is made from pork. Its red colour comes from paprika, mixed with salt, pepper and minced meat. Although it looks like a big sausage, sobrassada has the consistency of pâté, so it is spread on bread to eat. Menorca also produces its own version.

Between 1,000 and 300 B.C. the Talayotic era was born. Numerous remains from this period can be found in the Balearic Islands, especially on the island of Menorca. They are characterised by taules: imposing T-shaped megaliths that can be up to 3.7 metres high. Most of the time, they are surrounded by a U-shaped wall.

You speak Catalan, or at least Spanish. If you know two words of Spanish, don't hesitate to use them! Here, the population is used to tourists and will appreciate anyone who makes the effort to speak Spanish, even if only a little

You will not talk to (almost) anyone! Spaniards generally dislike the use of "vouvoie" and banish the word " usted " (the polite "you") from their vocabulary. However, it is appropriate to be polite to older people and employees.

You respect others as you respect yourself. This is a particularity of the islands: in the towns and villages of the Balearic Islands, everyone walks around calmly without being judged on their appearance, religion or customs

You respect the environment by not leaving plastic or cigarette butts lying around. Nature is sacred in the Balearics.

You don't hesitate to add an ice cube to your latte