It is not for nothing that Corsica is nicknamed the Island of Beauty! In the south of France, in the heart of the Mediterranean, Corsica enchants us with every visit. This mountainous island offers a rare natural heritage, a strong identity and an authentic culture, without forgetting a crystal clear sea. We go there to sail, sailboat, swim, dive, surf, hike... We meditate in front of the sumptuous beauty of the landscapes. We indulge in idleness without which Corsica cannot really be appreciated. We take the time for an aperitif, a meal of Corsican delicacies that goes on from palaver to tasting. A miniature continent, Corsica offers a wide variety of landscapes and its exoticism and sunshine all year round. Wild and welcoming at the same time, preserved but open, dignified and voluptuous, soft and rough, Corsica is unique and generates as many strong emotions as surprises to its visitors. Among the must-see places on the island selected by your travel guide are the beaches of Porto-Vecchio, Cape Corsica and Calvi, Bastia and Bonifacio, the citadel of Corte, the museum of Aléria and its archaeological site. The magnificent Bavella massif, for its part, attracts hikers and climbers. You must visit the Palais Fesch, the Fine Arts Museum ofAjaccio, the Lavazzi Islands nature reserve, without forgetting to go with your nose to the wind, to stop over in the villages, to meet the producers of jams, charcuterie or Corsican cheeses recommended by your favourite guide. And why not attend a workshop to discover essential oils or learn the Corsican language... Follow the Corsica guide to discover this unforgettable destination

What to see, what to do Corsica? 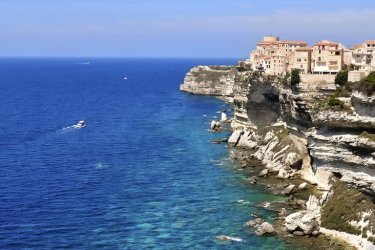 What to visit Corsica ?

When to go Corsica ?

Corsica can be visited all year round. With its privileged Mediterranean climate, Corsica offers sunny days suitable for walks and visits even in winter. In January/February, you have the choice: enjoy sea urchins on the beach, swim in water at an average temperature of 14°C or enjoy the snow in one of its ski resorts (the island is mountainous, remember). Those who are not so keen will wait for the spring when the sea water rises to 20°C and reaches 27°C in the summer. The island boasts 59 days of sunshine in summer! The tourist influx is then at its peak on the coast, in the creeks, on the hiking trails, in the cultural sites... During the summer months, the coastal towns benefit from a sea breeze that reduces the feeling of heat and refreshes the atmosphere. And the mountains are never far away with their more temperate nights. The tourist offers are more numerous in summer and Air Corsica which connects all the French regions breaks the prices. Those who have the choice will however prefer the less busy, less hot and calmer shoulder seasons. You can enjoy the beach and swimming until the end of October. And don't miss the chestnut fair in Bocognano (December).

Corsica offers so many possibilities that it is sometimes difficult to know which way to take it. In any case, the small size of the island combined with its great variety of landscapes offers the possibility of very complete stays in a short time. A territory on a human scale, you will be able if you wish to travel through it with gentle modes of transport, such as walking, cycling, sailing, or why not on donkey or horseback! The train also offers, as we will see, unexpected perspectives. If the most important thing is to identify one's own tastes and objectives beforehand in order to make the most of your stay, one thing is certain: whether you prefer to laze by the sea or prefer sporting challenges, Corsica will certainly offer something for everyone to enjoy. From hiking to thermal baths, here are some ideas for themed holidays to discover the island.

Ten days of epicurean road-trip from Bastia, from beaches to vineyards

A week of hiking on the Mare a mare Sud

Vacations in a van, a reasonable adventure

Track down promotions for a dream vacation

Art'è Gustu : meetings of taste and know-how in Bonifacio

The Lama Film Festival team is proud to have seen many people who have passed through the festival rewarded at the 2020 Caesars ceremony. The ...

If there is an essential cheese to try in Corsica, it is brocciu, which is eaten as is with bread, pulenda, or prepared in traditional recipes like fiadone. Rare are the meals where the brocciu is absent, in a form or another. As the poet Emile Bergerat said: "Who has not tasted it does not know the island!

The manufacture of the knife of Corsica is an old know-how which requires rigour. Endowed with a great symbolic force, a knife could be transmitted as an element of the family heritage. The three most widespread types are the shepherd's knife, the stylus, a kind of dagger which appeared in the 16th century and the mythical folding "vendetta".

The Corsicans pay homage to their dead on the very spot of the event. On the roadsides, crosses, always maintained and decorated with flowers, are erected for the victims of road accidents or for the resistance fighters of the last war. As a good-luck charm, small palm tree crucifixes can be found in houses or cars.

This dry sausage made of meat and pork liver, flavoured with spices and garlic, is the most famous of Corsica's cold meats. It is eaten as is, accompanied by pulenda and brocciu, or cooked with starchy foods. It goes wonderfully with red beans, red wine and pancetta in the traditional Tianu.

The maquis is characteristic of the rich and varied vegetation found in Corsica. There are 78 endemic species, i.e. species specific to the island. The most present plants are strawberry tree, myrtle, immortelle, cyst, thyme, mastic pistachio or broom. Many of them can be found in the local gastronomy.

An integral part of the Corsican identity, one of the singular features of the local music is the polyphony, or a capella singing performed in several voices. Sacred or profane, there are a large number of variants which differ in their forms and in the themes they address, although the latter are most often inspired by local history.

He is called a moose, he is with the mouflon a legendary figure of the island. With its dark coat, short legs and stocky appearance, it is recognizable in the blink of an eye when you come across it on the roads. Prized by hunters for its unique meat taste, it is eaten as a stew, or stufatu di cignale, a local culinary specialty.

These megaliths, emblematic of the island's archaeological wealth, stand out from the different groups of European and Mediterranean menhir statues with their original iconography (morphology, carved weapons). There are 38 monuments of this type, the oldest dating from the end of the 3rd millennium and the most recent from between 1500 and 1000 BC.

This geological term comes from the Corsican tafone, which means "hole", and designates a rounded cavity whose dimensions can go from about ten centimeters to several meters. Result of the erosion of magmatic rocks under the action of moisture, they often form magnificent natural sculptures, like the lion of the Cape of Roccapina.

Presumably adopted by Sardinia and Corsica at the time when the Kingdom of Aragon dominated the Mediterranean islands, it symbolized the victory of the Crusaders over the Moors. But its definitive and official adoption by the heart of Corsica is due to Pasquale Paoli, who chose this flag for the Corsican nation founded in 1762.

Mentalities have evolved in Corsica and there are practically no longer, as there were until the last century, families killing each other for several generations. Nevertheless, the sense of honour, respect and duty is still very much alive, and Corsica has a very strict code of moral and social conventions. We must be attentive to that.

For the Corsicans, they represent a return to their roots, an identity and an ancestral way of life. For tourists, they are objects of fascination. Perched on steep mountains or curled up in the hollow of turquoise bays, their architecture blends harmoniously with the surrounding landscape, as if they were carved directly out of stone.

You cultivate the art of Macagna. Macagna is to make a joke whose game is to make someone believe in a false adventure or event. The longer you make the fun last, the more successful it is. Gullible tourists are your favourite targets

You say hello a hundred times a day. Because that's the basis of friendliness, because you know everyone - or almost everyone - in the village or neighbourhood, and because you shouldn't be jealous

You know where to get good local products. It is not to you that we will sell donkey sausage or Dutch figatellu. Family, friends and neighbours are there to give you the best addresses. Directly at the producer's, that's often the secret.

When you're driving, you stop in the middle of the street to talk. In Corsica, you take the time to live and enjoy the pleasure of meeting people: here, slow life is not the prerogative of millennials, it's a well-established tradition