Minorca, walks and good food on the secret island of the Balearic Islands

The Balearic Islands are the second most visited tourist destination in Spain (after Catalonia) and welcome more than 10 million visitors every year. So much so that its beaches are rather popular... Less known than Ibiza or Majorca, the traditional Minorca can be a good option to have a little more peace.

A calm and family destination

Classified as a biosphere reserve by Unesco since 1993, the island of Menorca has managed to preserve its essence: it fascinates by the splendour of its beaches, its natural parks and by the multitude of prehistoric sites whose significance still remains, on the whole, unexplained. Mysterious, the island of Menorca is full of legends and the wind that blows there is said to change the personality of its visitors...

Its two main towns, Maó and Ciutadella, are located at the eastern and western ends of the island respectively. Far from the madness of Ibiza and the massive tourism of Mallorca, Menorca is a calm and family destination. Even if a few resorts spoil the landscape (especially Cala'n Porter), you can still escape the crowds, especially if you put your towel down on the beaches of the north-east of the island. If Formentera has its chiringuitos and Ibiza its nightclubs, Menorca has the best restaurants in the Balearic Islands. If you like long summer evenings with a bottle of white wine and a seafood platter, this is your paradise..

We'll start with Maó, the island's capital. Built on a 50 m high cliff, it overlooks one of the safest natural harbours in the Mediterranean (it is also said to be the largest natural harbour in this sea), 5 km deep and sheltered from the strong winds that blow over the island for several months a year. Tradition attributes its foundation to the Carthaginian general Magon, brother of Hannibal, who took refuge on the island after his rout on the peninsula.

The entire town of Ciutadella is a museum, with its narrow streets that transport you to who knows what medina, its villas hanging over the port. Ciutadella is secretive and has an unfathomable atmosphere. Located at the western end of Menorca, Ciutadella is 45 km from Maó. It currently has a population of around 30,000. Its port, the second largest on the island, is deeply embedded in a ria, a sort of natural harbour in the shape of a gully, carved out of the cliffs, and which runs right into the heart of the old town. It is really a perfect place for a sunset stroll.

Another unmissable walk is the one that leads to the Monte Toro promontory. From the top of its 357 m, it is the highest point of the island. From here, there is a superb view of the rocky, bare Bay of Fornells to the north, and of the town of Maó and the plateau to the southeast.

Mystical souls will be able to meditate in a sanctuary built on the ruins of a primitive convent, in front of the remarkable black Virgin, patron saint of Menorca. Skeptics should respect the silence that reigns in this place. Beware: scruffy people in beachwear will be mercilessly turned away! Legend has it that it was a black bull with silver hooves that indicated where this statue of the Virgin was buried. But the name of the mountain comes from the Catalan word Turó, which means "hill". Visitors who take the steep path will discover the Enzell spring, the only bottled spring water in Menorca.

A wealth of prehistoric remains

There are 1,603 megalithic monuments in Menorca, a density of 2.5 remains per square kilometre, and as many as 10 per square kilometre in the south of the island. The purpose of these constructions remains enigmatic. The 300 talayots, stone towers without mortar, comparable to the Sardinian nuraghes, with an average diameter of 15 m, are about 8 m high. Historians have studied the origin of these strange constructions. Did they serve as watchtowers or defence towers? Were they funerary monuments, as suggested by the ashes and fragments of human bones found in the talayotic chambers? This was, in any case, the function of the navetes, these collective tombs in the shape of an inverted nave.

The most mysterious and impressive monuments are, without a doubt, the taules, composed of two colossal T-shaped stones, placed in balance one on the other, and whose height sometimes reaches 5 m. They are found only in Minorca: there are about thirty of them, some of which are still in excellent condition. Since the 18th century, archaeologists have wondered about the significance of the taules: central pillar supporting the roof of an immense covered room, giant sacrificial altar, stylized bull's head? The mystery remains

White sandy beaches, rocky beaches, diving or lazing around paradise, they are all very rich in Menorca. Before choosing your beach for the day, ask the locals which way the wind is blowing: if it comes from the north, head for the southern beaches, and vice versa.

To find the most beautiful beaches on the island, famous for their turquoise waters and wild landscapes, head to the west of Menorca around the town of Ciutadella. However, these beaches are no longer a secret to anyone, and to enjoy some peace and quiet, the beaches north of Ciutadella (Cala Pilar, Cavalleria) are just as beautiful and much quieter. To the south of Ciutadella, the beaches are beautiful but overrun with tourists and heavily urbanized. Cap d'Artrutx, Cala en Bosc, the beach of Son Xoriguer or, closer to the city, Cala Blanca and Cala Santandria. Fortunately, there are still unspoilt beaches to the south of the city, and many ravines shelter coves of fine sand and clear water under pine trees

To discover our favourite, head for the two small beaches of Cales Coves. Lined with pebbles and rocks, they are bathed in very pure water (except when the sea deposits dead algae from the open sea). As you approach the rocks, you can see many multicoloured fish, crabs and even octopuses. The rocky walls surrounding the beach are pierced by hundreds of caves, which gave them their name, used for funerary purposes in Roman times. In the 1970s, hippies and nudists set their sights on these pristine areas, which are now very popular in high season.

Generous and varied, Balearic cuisine is directly inspired by the culinary traditions imported by the various conquerors and colonisers of the islands throughout history. Its greatest borrowings are undoubtedly from Catalan cuisine and that of the Valencia region, the latter having itself borrowed heavily from Arabic cuisine. The cuisine is based on olive oil and uses both local products and those from the sea. Common to the four islands of the Balearic archipelago, the famous pa amb oli is to be enjoyed at the beginning of the meal: these are pieces of bread previously bathed in olive oil and rubbed with garlic, which are spread with a tomato and vinegar-based sauce. El allioli (garlic mayonnaise) is prepared in all the islands and is served as a starter with bread and olives. Another delicacy to be tasted in the four corners of the archipelago: the sobrassada (local cold cuts). The cocas, a kind of local pizza, are also very famous. Enjoy your meal!

When is it time to visit? The main tourist season starts in June and July is the beginning of the tourist invasion. Spring, like September and October, is very variable, but this is when the best weeks of the year are enjoyed. The climate seems delightfully mild in winter, with temperatures averaging no lower than 12°C.

Getting there. From Spain, Menorca airport is served directly from Madrid and Barcelona by Iberia, Vueling and Air Europa. If you are flying from Paris, you can fly to Majorca and then take a boat to Menorca.

TOURIST OFFICE OF MINORCA - More information on the website 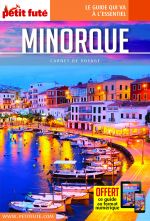 Reconciling the arrival of a newborn baby in the family with the desire to travel is not always easy. Indeed, we are ... Read the article

Of the various Balearic islands, Menorca has been the most successful in preserving its identity over the years. The ... Read the article