The discovery of the capital of Japan is a great shock. This city is exciting, bubbling, incredible and without equal in the world! Within the gigantic Tōkyō lie ultra-modern districts with skyscrapers competing in audacity and elegance and residential districts with traditional houses and Shinto temples, with small holy statues at a street crossing and a bicycle path along a canal... Here modernism meets tradition. We leave a five-storey store dedicated to cameras only to eat in a small restaurant in udon house. If high-tech is a religion here, so is citizenship, which police actions and all excesses. Not a hair protrudes! Nobody pushes you around on the subway. No one misses their train! Tōkyō is also the pleasure of eating Japanese delicacies on every street corner and making your bento to your liking, of finding a small shop selling second-hand kimonos, of discovering a craftsman who prepares, in the tradition, fresh tofu every day. Of course, you will visit the sanctuary shintō Meiji at the imposing gate and the surrounding woods and public gardens dominated by the Imperial Palace (Kōkyo), not to mention keeping time to discover the collections of the city's museums. For a great moment, treat yourself to a ryokan (traditional inn) or a bath in the hot springs of the surroundings. And it's better to plan it: you'll come back with Japanese dishes!

What to see, what to do Tokyo? 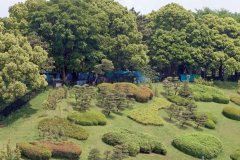 What to visit Tokyo ?

When to go Tokyo ?

As in all major capitals, stays in Tokyo can be planned throughout the year. However, spring and autumn are the high tourist seasons during which hotel rates are highest. Since accommodation is the most important budgetary expenditure in Japan, it may be interesting to go out of season. To avoid the highest crowds and pay less, the best period is late November-early December, late February-early March, or late May and June, the low tourist season in Japan. Note that if you go to Japan in the spring, you will have the pleasure of attending Hanami, the festival that celebrates cherry blossoms. The spectacle of this flowering will enchant you!

Due to the Covid-19 pandemic, entry and travel restrictions may apply Tokyo. Remember to visit the site of the Ministry of Foreign Affairs before you leave for the latest information
Practical information for travel Tokyo
Formalities Budget Horaires Getting around Gastronomy

Modern Tokyo for the whole family

Traditional Tokyo for the whole family

Tōkyō, Kyōto and Nara for a long week with your group or family

How to go Tokyo

Travelling alone is no problem, as Japan is one of the safest countries in the world and the Japanese are always ready to help tourists. The only problem is the language because the Japanese hardly ever speak English, let alone French! Remember to bring a small dictionary or use Google translation!

For Japan in general and Tokyo in particular, the offer is very wide. We will propose you the discovery of the triptych Tokyo, Kyoto, Nara in one week. Contrary to popular belief, smaller budgets will be able to find a one-month package in Tokyo at a fair price (with accommodation in a university residence).

The best way to get around the huge Tokyo is undoubtedly the metro. Simple and effective. The stations are written in English and advertised in the same way inside your train. Take a subscription card without which (and even with it!) you will ruin yourself while travelling. Taking a bus can be convenient. Cycling in the neighbourhoods is a good solution. To discover Kyoto or another city served, take the high-speed train (Shinkasen).

We all have echoes of Japan, through words like manga, geisha, sushi, Zen or karate that have been exported around the world and sketch the first images of a fantasized Japan. To go to Tokyo and Kyoto is to discover all the universes that are hidden behind these terms, to grasp the thousand and one forms that Japanese society takes beyond all our preconceived ideas, and, perhaps, to be carried away in a whirlwind of new things. Closely linked to Buddhism and neighboring China, the history of the archipelago, relatively closed to foreign influences for nearly 300 years, has led to the emergence of a culture apart, whether artistic, culinary or social. Japanese concepts such as wabi-sabi or Zen never cease to question and fascinate. Traveling to Japan is the perfect opportunity to grasp a bit of this culture, of which we give you some keys here.

Who are the geishas?

Onsen and sento, the art of bathing Japanese style

The "way of the gods" is a set of ancient beliefs according to which the elements of nature are inhabited by kami, deities who are not always benevolent, in the image of nature. Shinto has long existed in symbiosis with Buddhism, but in the 19th century the two religions were separated and Shinto became the state religion

Essential in Japanese culture, manga are comic books first published in magazines, which deal with all subjects and are aimed at all audiences. They are at the heart of an important industry, which is also supported by the sale of derivative products. The extent of the phenomenon goes far beyond the borders of Japan

Developed with the tea ceremony, Japanese-style service raises the art of welcoming guests to an art form. Everything revolves around the guest who is served with care. From the saleswoman who wraps your groceries in tissue paper to the hotelier who carefully prepares the futons for the night, omotenashi can be seen throughout society.

Festivals are the rhythm of the Japanese year. Traditionally linked to the agricultural seasons, they are nowadays organized by temples or sanctuaries. There is a whole range of them, but those where an o-mikoshi is carried are very common. The richly decorated palanquin houses the local deity for the time of a tour in the neighborhood.

The Japanese cultivate the art of "kawaii", the cute, the harmless. In Hello Kitty's native country, it is as much a form of artistic expression as a lucrative industry. People, animals or objects take on round and childish features, and everything is tinted with fluorescent or pastel colors. Even the police has a kawaii mascot.

An essential concept of Japanese aesthetics, wabi-sabi is composed of 2 terms: wabi or the fullness of simplicity and sabi: the feeling of facing the marks of passing time, of wear and tear. It is the art of perceiving the beauty of imperfect things, exemplary in the kintsugi technique: gluing together with gold the pieces of a broken object

Japan is the world leader in the robotics industry. The use of robots is all the more crucial as there is a need to overcome the shortage of manpower due to population decline. Autonomous trucks are expected to be on Japanese roads very soon. Robotisation also affects other sectors such as care and recreation

Mythical Japanese mountain and symbol of the country, Mount Fuji culminates at 3776 meters and is one of the 3 sacred mountains of Japan. A place of pilgrimage sung by poets and sublimated by artists, the volcano and its almost perfect conical shape continue to fascinate. Located 100 km southwest of Tokyo from where it can be seen in good weather

The Tokaido Road is the main road connecting Tokyo and Kyoto. In the Edo period, it was used by daimyos and their retinue to travel to Tokyo on foot. If you take the Shinkansen to Kyoto, you will surely take the same route as the Edo travelers... or you will follow their steps on foot near Hakone or Shizuoka.

Access to clean toilets is easy in Japan. They're in konbini's, train stations, shopping malls. Most are equipped with a real dashboard with water jet, music or seat heating options. In shopping malls, they are almost like beauty salons where women put on make-up or change their clothes.

The tidy fairy Marie Kondo may have been a bombshell abroad, but here she is an epiphenomenon, as the clean and tidy sector is saturated with stars who publish their advice. In a society of hyper-consumption, minimalism drawing on values of simplicity inspired by Zen Buddhism is becoming more and more appealing

The 24/7 convenience stores are literally on every corner in Tokyo. They are a great place to grab a quick bite to eat, get cash, go to the bathroom or even buy last minute souvenirs. In the evening, they shine like lighthouses in the night, around which revelers gather.

You line up on the platforms of subways, trains and in front of restaurants

Dressed in colorful yukata, you run to see the fireworks in summer.

The mask is your friend. You wear it when you have a cold, are tired or look bad

You bow slightly to say thank you, hello or goodbye.

If you never eat while walking, you sip a tea or a green tea latte from a trendy café

You always carrya small towel to mop up sweat or dry your hands.

Your shoes are always lined up and facing the direction you put them on when you take your shoes off at the entrance. Besides, you only have shoes that are easy to take off and put on

You abuse sumimasen, "excuse me". It can mean please, sorry or thank you

Soccer is good, but baseball is better!

Other destinations nearby Tokyo