Sometimes a New Yorker wonders what makes Manhattan the most famous of the 5 boroughs in the cosmopolitan city of New York, often confused with the "big apple" itself. Why does he live in an overcrowded, noisy Babel, with difficult weather conditions, living at a thousand miles an hour? The truth is that the inhabitants of the City are nourished by the prodigious energy of this city that never sleeps. Silence does not suit them, immobility disturbs them. And Manhattan is so full of life that they always find something to fill their agenda, between museums (including the famous MoMA) and art galleries, shows and events programmed every day by the dozen, fashionable bars by the hundreds, chic or low-budget restaurants serving innovative cuisine or keeping know-how from the four corners of the world, deluxe or trendy shops (ideal for shopping)... Adventure awaits them on every street corner! Strolling through the streets of Manhattan is also about soaking up the excesses of its skyscrapers while enjoying a bagel or a hot dog. From Soho to Harlem, from Greenwich Village to the Lower East Side, Times Square, Central Park (New York's green lung) and Broadway, Manhattan's tour guide explores the island's 21.5 km long and 3.7 km wide to reveal its quintessential beauty.

What to see, what to do Manhattan? 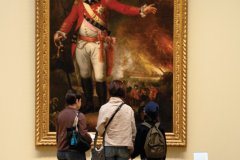 What to visit Manhattan ?

When to go Manhattan ?

When to go to Manhattan? There is no high or low season in New York, the city is operating at full capacity 24 hours a day, 365 days a year. Some seasons can be particularly pleasant for their climate or their relative tranquility in terms of tourist numbers.

Spring is very mild (May and June) and it is also a very busy time for festivals and cultural events, with prices tending to rise. Be careful, sometimes winter extends until mid-May.

September and its famous Indian Summer is certainly the best time to go to Manhattan: temperatures in the 20 to 25°C, beautiful sunshine, clear skies and a quieter city, where the months of July and August are often hot, stuffy and overcrowded.

Finally, spending the Christmas holiday in New York can be a great experience if you're wondering when to go to Manhattan. It is very cold, of course, but it is a dry cold that makes it possible to tolerate the level of mercury. The oceanic climate of the city often gives a blue sky and a vigorous sunshine (ah! the New York light...) which makes the immaculate snow cover of the Big Apple even more brilliant (very beautiful walks in Central Park in perspective, where you have every chance to meet a ski room in the park's valleys). As Americans have a sense of celebration and celebration, you will discover a city entirely decorated with Christmas colours and gigantic festivities.

Due to the Covid-19 pandemic, entry and travel restrictions may apply Manhattan. Remember to visit the site of the Ministry of Foreign Affairs before you leave for the latest information
Practical information for travel Manhattan
Formalities Budget Horaires Getting around Gastronomy

New York, a condensed of America

A Week of Culture, from Boston to Washington

A taste of the Big Apple

How to go Manhattan

Going out alone to discover Manhattan is absolutely no problem and can even be a great opportunity to meet people. If you do this well in advance, you can now find air-only flights from Europe and back for less than €300. The same goes for housing: anticipation will make it possible to get by better than improvisation on the spot. On the security side, travellers have nothing to fear in Manhattan, it is a safe city.

There are many French-speaking tourist agencies offering organized trips to Manhattan and New York in general. A stay in the Big Apple is expensive, but because of their good knowledge of the field and the partnerships that some service providers have forged over the years, it is sometimes advantageous to use their service to benefit from packages combining flight and accommodation. The city has so much to offer that it is possible to elect a thousand themes to explore its corridors.

There is no need to rent a vehicle in Manhattan because public transportation is so extensive. The king means of transport here is... your shoes! The best way to discover the city is undoubtedly by walking, which you will not hesitate to combine with a few trips in the picturesque subway cars of New York. Manhattan's famous yellow taxis are also recommended, to hail nonchalantly. New York also has public bicycles: City Bike.

NBA: how to buy tickets for the New York Knicks at Madison Square Garden

Go to New York at the best price (limited offer)

Seeing New York on the screen and in your friends’s holiday photos, you probably have the impression that you know it;even before you set foot in it, you can’t imagine that it won… surprise you… be mistaken! This multifaceted city has many surprises in store for you, both in terms of its history and its culture, cuisine, people and indescribable energy. It is here that street art, hip-hop, punk rock were born, here again that black literature was developed and Beat Generation emerged. A set for films, series, novels, it is inspired and inspiring, inspiring because it is inescapable. We will not claim that it is the capital of the world, for fear of falling into clichés, but we will dare to say that it has it in the making.

A capital of street art

One of the most significant and perhaps the most tragic episodes in New York's history occurred on September 11, 2001, when two planes piloted by Al-Qaida terrorists crashed into the towers of the World Trade Center, killing more than 2,600 people. This disaster has shaped today's New York in many ways.

You can't visit New York without going to Broadway, the avenue where successful musicals and plays are performed every day. The best of the best actors are on stage in these spectacular shows that thrill tourists as much as New Yorkers. Dramatic, glamorous and humorous, there is something for everyone.

As soon as you get out of the taxi, you get the impression you already know this city, so much you've seen it in the movies. Times Square, Central Park, Fifth Ave and its whirlwinds of yellow taxis, the fire escapes that zigzag on the facades of buildings... A simple stroll through the streets of New York can quickly turn into a film pilgrimage.

New York is perfectly safe today, but the city remains famous for its tumultuous past. Perhaps because she has been immortalized many times on the big screen, the mafia fascinates. While its activity has declined, it has not been eradicated and the five families that have ruled New York since the 1930s are still working in the shadows

In the 1970s, a new sound emerged from the dilapidated streets of the Bronx: hip-hop was born during block parties. Much more than a musical genre, hip hop is a cultural movement from which graffiti and break dance also originate. New York City has seen the birth of the greatest rappers in history, including Biggie, Nas, 50 Cents and Jay-Z.

New York is one of the most cosmopolitan cities in the world. When you walk through its streets, you can see that all communities live together peacefully. It must be said that more than a third of the city's population was born abroad, and even New Yorkers by birth are also from a relatively recent immigration background!

Food is one of New Yorkers' obsessions, and discovering new restaurants is one of their favorite activities. In New York, we eat at any time of the day or night and, above all, we try every imaginable kitchen. And the smells that attack us on every street corner make any attempt at resistance useless..

The hipster may be an endangered species, but in New York, there are still a few fine specimens. This fan of alternative culture can be recognized by his retro look, his Apple devices and his almond milk coffee. To observe them in their natural environment, you have to go to the Williamsburg and Bushwick neighborhoods in Brooklyn.

The first New York Marathon was held in 1970 and saw 127 runners compete. Five decades later, there are about 50,000 participants per year. To have a chance to run in the streets of New York on November 3rd, you have to be drawn lots or pay the prize to an agency... Unless you are a top athlete!

The Empire State Building, the Chrysler Building and the One World Trade Center are all skyscrapers that make up the legendary New York skyline. Just climb on a roof or cross the river to Brooklyn or Queens to get a glimpse of this skyscraper horizon. And at night, it's even more spectacular!

They are the basic element of any New York postcard worthy of the name: the yellows cabs, the yellow taxis that are omnipresent in Manhattan. As in the movies, all you have to do is stand on the street and raise your arm and one of them stops. If in doubt, take the example of the New Yorkers, they are professionals in this field!

What would New York be like without the New York Stock Exchange, its famous Wall Street stock exchange? Symbol of American capitalism, the world's largest stock exchange is filled with young wolves in suits and ties whose teeth scratch the floor. One of them was immortalized in the movies in Martin Scorsese's The Wolf of Wall Street.

You belong here if you have that little something called the New York attitude ! You're impatient, always in a hurry, you weave in and out of piles of garbage and taxis, you jostle tourists who, with their noses in the air, admire the skyscrapers you don't even notice anymore. Deep down, you're nice, it's just that all those years in the city have hardened you

When you're not busy working, you're busy going out. You don't cook much, you prefer to eat out, in the trendy places of the moment, even if it means waiting in line for three quarters of an hour for an empanada. You fold your slice of pizza in half before eating it, usually in the street. Besides, you know at least ten places where you can eat a slice for less than 2 US$

You think it's too heavy in the summer, too cold in the winter, you complain about the subway that never works and yet you tell anyone who will listen that New York is the greatest city on earth.

Other destinations nearby Manhattan