Dubai refers to both one of the United Arab Emirates and its trendy capital with its delirious skyscrapers, luxury hotels and designer boutiques. On the menu: caviar, champagne, marble, crystal and 24-carat gold! At night, fortunes are displayed, VIPs show up and DJs electrify the track. The spectacle is permanent in this city where all nationalities, luxury cars and giant boats live together. A concentration of excesses and records with the 830 m high Burj Khalifa, the widest 7-voice highway in the world, a marina with 200 skyscrapers, the Burj Al Arab, a self-proclaimed only 7-star hotel in the world with a gold-plated elevator. Dubai is undoubtedly the trendiest place in the Middle East, the one that attracts the jet-set of Arab countries, VIPs from all over the world and tourists of varying degrees of wealth. Spectacular, the immense Palm, an artificial island in the shape of a palm tree with 8,000 luxury villas, and this World, an archipelago of 300 artificial islands that make up the world map. Incredible, this covered ski resort. In addition to its bling bling bling city, which has emerged from the sand in 30 years, Dubai offers a magnificent desert, but also its mountains with the Hajar chain bordering the Sultanate of Oman. And tourists have a great time: seaside resorts and amusement parks, 4x4 race through the dunes, night in tents in the desert, horse races or Formula 1 world championships.... Dubai is the madness of grandeur with no limits.

What to see, what to do Dubai? 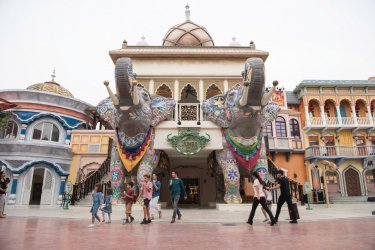 What to visit Dubai ?

When to go Dubai ?

In the heart of summer, the heat melts the prices and you can afford a stay in a luxury hotel for the price of a small 4-star hotel. The same applies during the Ramadan period, when the country is running at a slightly slower pace and is experiencing a significant reduction in the services usually offered (fewer means of transport, restaurants and bars in the centre closed during the day, amusement parks open for less time...). However, due to the high average hotel occupancy rate, it is difficult to really speak of low season because Dubai is a popular destination during the hot months for people in the Gulf countries. The high tourist season in Dubai begins with the real drop in temperatures at the beginning of November and ends at the end of April, but the best times to go to Dubai are in the off-seasons: autumn and spring. In winter, many commercial, sporting and cultural events take place and the days are beautiful. On the other hand, the full summer is hot, so we take refuge in the malls, swim in the refrigerated swimming pools and the country plays the night owl, living between 8pm and 3am. The best season to discover Dubai is four months: October to the end of November and March-April. The average temperature is 30°C during the day and does not fall below 20-24°C at night. The temperature of sea water and swimming pools is ideal, around 28 °C. From the end of November to March, it is winter. Temperatures are mild, around 24°C from December to February. The evenings may then seem a little chilly. And if you have decided to spend the night in the desert, be aware that mercury can drop to 10°C. You should also know that the sea is 20°C in the middle of winter and the beaches are deserted.

Due to the Covid-19 pandemic, entry and travel restrictions may apply Dubai. Remember to visit the site of the Ministry of Foreign Affairs before you leave for the latest information
Practical information for travel Dubai
Formalities Getting around Gastronomy

Dubai, for a weekend

The Emirates tour in one week

How to go Dubai

No difficulty to organize your stay yourself. There are many air-only flights to Dubai. The choice of hotels is very wide. You can rent a car to reach Doha, for example, and discover another Emirate. Public transport and taxis make it easy for you to discover Dubai. Call on an excursionist on site to discover the desert.

This formula can be interesting for proposals for unusual discoveries accompanied by a guide. We will show you a super-luxurious apartment, a large hotel, the kitchens of a large restaurant, excursions in the desert, a festive evening, original seaside resorts or some VIP services, just to make the most of the ambient luxury. Also classic stays, flight, hotel, beach.

There are four main means of transport available to tourists: metro, taxi, bus and boat (water taxi or abra). Two-wheeled transport is practically non-existent and walking, even if all districts offer ever larger spaces for pedestrians, is not yet a common practice either, and one cannot really move from one district to another on foot....even less in the middle of summer

Travel to Dubai: what steps to take regarding the visa?

It's the city of all possibilities. In less than 72 hours, you can walk through the historic district and discover a rich and little-known past in one of the museums before crossing the Abra Creek and getting lost in the souks. Take a dip in the sea, drive a vintage 4X4 for a retro safari in the dunes. The next day, fly over the desert in a hot air balloon before a jet ski tour in front of the Burj al Arab. At sunset, find yourself at the top of the Burj Khalifa, amazed by this city emerging from the sand, before smoking a shisha in front of the sound and light of the dancing fountains. It is also to understand the culture and traditions by exchanging with locals, wandering through the art galleries in Alserkal. Then parachute over the Palm. Marvel at new technologies at the Museum of the Future before enjoying the local grouper in the small ports. The big gap between Tradition and Futurism. You're in Dubai.

These clothes are the visible signs of Emirati identity. A long black mantle for madam, the abaya is sometimes discreetly decorated with gold threads and embroidery. For the gentleman, the dishdash or kandura is a long dress made of immaculate white cotton, sometimes in colour in winter. Mister changes nearly 4 times a day

It's an institution in Dubai on Friday lunchtime and an inexhaustible topic on social networks. Almost all restaurants offer it. Some are more festive, others more family oriented. In the non-alcoholic or all-you-can-eat version, the expatriates put on their sundowns and perch on high heels to stroll in front of the pantagruelic buffets

Word meaning "Tower" in Arabic. The Burj Al Arab, a sailing hotel, became the first emblem of the city before being dethroned by the Burj Khalifa, the highest tower in the world which culminates at 828 meters high. A paradise for lovers of architecture, its countless towers make Dubai the4th city in the world with the most skyscrapers.

Historic district of Dubai which designates a natural inlet that allowed the economic development of Dubai around the trade of pearls and spices. Thanks to the abras, traditional wooden boats equipped with a motor, one can cross it to reach the souks between Bur Dubai and Deira. Between museums and souks, a change of scenery is guaranteed.

City at the gates of the desert. It's when leaving the city in a 4X4 that you realize how close the desert is. Sunset, desert safari, reconstituted Bedouin camp, falconry demonstration... From October to May, locals, expatriates and tourists meet there in large numbers for half a day

Dubai ranks among the 20 most innovative cities in the world. Every effort is being made to create an ecosystem that welcomes and helps investors to locate around new technologies in order to become one of the leading cities of the fourth industrial revolution. The Museum of the Future, which will be inaugurated in 2021, will be the emblem of this.

The "Ladies Night" is an institution of Dubai social life. To sum up, some bars allow women to drink to the eye. Originally it was every Tuesday and the success is such that you can find them almost every day of the week. There is a website where you can find out where, when and how to enjoy them: www.ladiesnightdubai.com

Artificial island iconic of the city and shaped like a palm tree. It is the symbol that in Dubai nothing is impossible. No other project has generated so many reports, criticisms and fantasies. It took only 6 years to build this island on 560 hectares of land, comprising a trunk and 16 branches and housing residences, hotels and restaurants

Even non-Muslims are looking forward to this month, except that the configuration of the city is changing. The city is collected during the day and festive as soon as night falls. The whole population goes to the many iftars (meals that break the fast) and suhoor organized either in families or in the tents set up by the hotels.

The affectionate diminutive used by the people of Dubai to name Sheikh Mohammed Bin Rashid Al Maktoum, sovereign of Dubai since 2006, but also Prime Minister and Vice-President of the United Arab Emirates. He converted Dubai into a modern megacity. More broadly, the Sheikh designates the chief of the tribe and translates as Master or Sage.

This is The Road to Dubai, whose diminutive SZR can be found everywhere. An integral part of the E11 motorway which crosses all the emirates, it is the main artery that cannot be ignored, allowing you to cross the city at almost 120 km/h and to see all the emblematic buildings of the city. It can also be easily travelled by metro

In this city where more than 200 nationalities live together, she is the key word, to the point that a ministry is dedicated to her. In 2019, the Year of Tolerance is inaugurated by Pope Francis who came to sign the document on human fraternity with the Imam of Al-Azhar. The agreements of Abraham in 2020 establish peace between the country and Israel.