What to see, what to do United Arab Emirates? 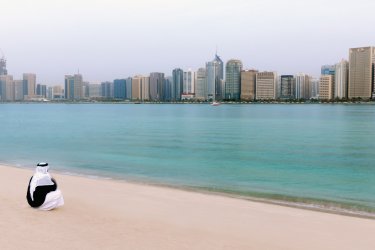 What to visit United Arab Emirates ?

Abu Dhabi, the time of a long weekend

Around the emirate in a week

The tour of the emirate in two weeks

Travel to Dubai: what steps to take regarding the visa?

The emirate of Abu Dhabi covers an area of 67,340 square kilometres (87% of the United Arab Emirates), which is twice the size of Belgium. Three provinces make up the emirate: Abu Dhabi, covering the capital city, its suburbs and the coast as far as the gates of Dubai; Al Ain, encompassing the city, its palm groves, the peak of Jebel Hafit at 1,240m and the surrounding desert; Al Gharbia, the great south and west of the emirate (cities of Madinat Zayed, Liwa). The Emirate has nearly 400 km of maritime window, from lagoons to salt pans, from beaches to rocky skiffs. Two or three hours from the capital, head for the shade of the Al Ain oases and admire the many 19th century forts, or head for the heart of the ochre desert for an exhilarating camel ride

A reasoned development, turned towards cultural and entertainment projects, allows today the flowering of amusement parks and museums of international rank.

The biggest show in the world

These clothes are the visible signs of the Emirati identity. The abaya is a long black coat for women, sometimes discreetly decorated with gold threads and embroidery. For men, the dishdash or kandura is a long, immaculate white cotton dress that is sometimes coloured in winter. The gentleman changes almost 4 times a day.

Name given to the wind tower, ancestor of air conditioning, imported from Iran at the end of the 19th century. It rises 5 or 6 m above the house. Its ingenious system of openings and vertical ducts allows the breeze to ventilate the interior. Above these towers, the women dry the laundry, adding humidity to the ventilation.

Fixed by modernity, they now live in villas, abandoning their precarious huts! Semi-nomads, living yesterday on dates and pearls, the Bedouins are a distant memory whose ghost you will meet in the Al Gharbia region. Every year, festivals are organized in several emirates to revive the past of this culture.

It covers 70% of the emirates' territory. It is impossible to forget: sand is visible in the cities, on the sides of the roads or on the rare plots of land still unoccupied. On windy days, it coats the cities with a yellowish haze. It is a privileged place to recharge your batteries by spending an evening in the camps.

Traditional wooden boats, they are still made according to an ancestral method. Nowadays, dhows are used for commercial purposes but especially for tourism and are part of the charm of the Emirates. As part of the heritage, they are the pride of the Emiratis who travel to attend the dhow regattas held in winter.

Like the dromedary, the image of the falcon perpetuates the Emirati people's attachment to their Bedouin traditions. Falconry, the country's totem animal, has become a traditional sporting activity and has been listed as a UNESCO World Heritage Site since 2010. There is even a hospital for falcons in the vicinity of Abu Dhabi City.

Present throughout the country, the builders used coral stone, sand, gypsum, branches, palm tree fibres and shells, and beams from mangrove wood. At the time of the tribal wars, they were used as defensive zones for the clans, but above all to protect the fresh water wells located within the fort.

Arabian coffee is served in hotels, at your hosts' homes, at any time and accompanied by dates. Served in the Dallah, a long-spouted coffee pot, it is made with very little coffee to which cardamom and sometimes rose water are added. Its colour is that of a light tea. To soften its bitterness, it is drunk with a date in the mouth.

Inherited from the Bedouin culture, hospitality is truly the dominant trait of the country's inhabitants. Symbolized by the Arabian coffee pot (newcomers are always offered coffee and dates), this quality is widespread in each of the seven emirates, where locals and expatriates are always ready to inform or help foreigners.

"God willing! This is the kind answer to any request, whatever it may be, to justify oneself in case one cannot honour a request in time. This word of everyday language is adopted as quickly as it is feared. It must be understood, accepted and respected without ever getting angry: "Everything is in God's hands"

In this country where more than 200 nationalities cohabit, and freedom of worship, it is a master word and a ministry is dedicated to it. In 2019, the Year of Tolerance is inaugurated by Pope Francis who came to sign the document on human brotherhood with the Iman of Al-Azhar. The Abraham Accords in 2020 establish peace between the country and Israel.

Innumerable, unavoidable, almost perpetual, they punctuate the urban landscape and strike the visitor. Along the roadsides and in every neighbourhood, they erect their mountains of cranes and columns of scaffolding. They offer tourists a very curious panorama: that of a country in gestation, at work, ready to emerge from the sands!

You always speak with respect for the royal family, religion, traditions and culture of the country.

You always speak in acronyms and everyone understands you.

You never stress about a parking space, because there is always a valet

You feel cold as soon as the temperature drops to 25°C.

You're not surprised that schools close when there's a storm

You forget to lock the car and the door of the house or you leave the bag open all the time and you don't see what the problem is.

You walk into 5-star hotels as if you were in a bistro, because so much of the social life revolves around these luxury establishments