Discover the historic city of Luxembourg on a self-guided tour

In these times of health crisis, we all need to break the monotony by finding ways to distract ourselves. And what if this period was conducive to wandering and discovering cities that we haven't yet had time to explore? The city of Luxembourg, capital of the small European country of the same name, built in the heart of deep gorges formed by the rivers Pétrusse and Alzette, is the ideal place to stroll along its streets and alleys, while stopping in front of its architectural richness to take in the view. The capital of the Grand Duchy of Luxembourg is steeped in history, and it is to combine the pleasure of the eyes with the historical and cultural aspects that an application was created, offering the possibility of strolling on foot or by bike, alone, in pairs or with the family, and to marvel at a town that never ceases to surprise. A safe, flexible and autonomous way to get away from it all and have a great time

Discover the treasures of Luxembourg City on your own

Install an application on your smartphone, put on your good shoes or get on a bike and set off to explore the different districts of Luxembourg City while learning more about its history. That's what Sightseeing is offering, in order to continue to provide us with the moments we need more than ever. Already known for its excursions on board the Hop On Hop Off City Line buses and the small tourist train Pétrusse Express, the Sightseeing Luxembourg team is offering a new formula adapted to walkers and cyclists. The principle is simple: you buy a tour on the website, download the free application, scan the QR code of the tour and the self-guided tour starts through the city. As soon as you pass a point of interest in the city of Luxembourg, historical facts, stories and anecdotes are told to you via audio guides

And there is no shortage of points of interest in Luxembourg. Many districts are indeed ideal for a stroll, such as the Grund district, which is splendid with its beautiful buildings on the river bank and its terraced gardens, which give it a country atmosphere. Not forgetting Neumünster Abbey, a former monastery of Benedictine monks converted into a cultural centre. The walk in this lower part of Luxembourg is really bucolic and the application will reveal all its secrets. In the upper part, the old town never ceases to amaze, with the presence of old colourful buildings, monuments dating back several centuries and historic squares. You can guess that there are a thousand things to learn about this architectural wealth perched on a rocky outcrop, and classified as a World Heritage Site by UNESCO.

How can you miss the casemates of the Bock, which remind us that the town was fortified for several centuries? Although the fortified castle, built on the Bock rock, and the network of fortifications, the work of Vauban, were dismantled in the 19th century, there are still 17 km of underground passages, incredible raw galleries that you can explore and that allow you to immerse yourself in the history of Luxembourg.

Luxembourg is also one of those cities that offer breathtaking views. This becomes clear when you take the Corniche path, along the old ramparts that surround the city. You can then contemplate the Alzette valley and the Grund district. Later on, you will be delighted to reach the Passerelle, an arch bridge that not only links the station district to the upper town, but also offers an incredible view of the lower town from the top of its 40 m. And those who love beautiful views will not want to miss the Pfaffenthal panoramic lift

And then, of course, the self-guided tour will lead the walkers to the unmissable monuments. These include the Grand Ducal Palace, the residence of Luxembourg's head of state in the Flemish Renaissance style, the Gothic Notre Dame Cathedral and the facade decorated with figures of the former ARBED headquarters. The capital of the Grand Duchy is also home to unsuspected treasures such as the "Gëlle Fra" memorial, erected in memory of Luxembourg soldiers who fought in the First World War, the Malakoff Tower or the equestrian statue of King-Grand Duke William II of Orange-Nassau, another symbol of the city's history.

An initiative to get away safely

The health crisis has restricted the possibilities for cultural activities, especially for meetings at major events. In the city of Luxembourg, the main museums have also set up gauges in order to respect the physical distance. In this context, walks in the heart of cities are welcome and offer an opportunity to take a closer look at their heritage, the must-sees of course, but also the elements that one can quickly miss. A self-guided bike or walking tour is a perfect way to slow down and focus on what the cities have to offer in the squares, streets and unsuspected paths

A self-guided tour is conducive to the practice of slow tourism, i.e. tourism where you take your time and break with the hectic pace of everyday life. Patience, serenity, deepening of discoveries and improvement of knowledge on the heritage of the cities, their history and their evolution, this is what a self-guided tour through Luxembourg City guarantees. It is also an opportunity to practice sustainable tourism, with lessCO2 emissions. You can walk or cycle around and enjoy the environment while respecting it.

And then, the self-guided walk, thanks to the use of an application, is also a modern and practical way to get away. All you need is a smartphone, headphones and a helmet (for bike tours) and you're set. Note that the application also works in "off-line" mode. It is therefore possible to download the content at home or at the hotel with an Internet connection, and then to do the tour without a connection afterwards. In the capital of Luxembourg, the different tours are adapted to all types of participants. Adults, children, everyone enjoys walking around while getting informed and learning a multitude of things about Luxembourg. Please note that the tours with the app are also available for families. One QR code is enough for a family of up to 5 members. The outdoor tours are conducive to respecting health rules, so you take care of yourself and others, while continuing to enjoy yourself and offer cultural moments 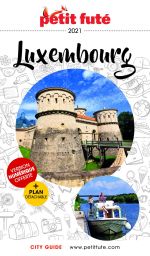 Istria: idleness, hiking and wine route, the region of Croatia where everything is possible

From harbours to islands, from beaches to trendy seaside resorts, from small perched and intimate villages to green ...

It is known that Porto, the leading city in northern Portugal, was once a Phoenician trading post. However, Greek ...

Why organize a seminar in Ile-de-France?

Many company managers have to bring their employees together for seminars. The objectives are to strengthen the ...

Stop running! You are in Corsica. Rejuvenate in a land that is good for you. Come out of season. Choose gentle ...