Albi is of course its Episcopal City, listed as a UNESCO World Heritage Site, but not only that... From Casteviel to the banks of the Tarn, the city where Toulouse-Lautrec was born, hundreds of thousands of tourists come to enjoy the pleasures of the table and to explore a department of the Tarn, rich in treasures. And French Tuscany, as the department is sometimes nicknamed, shines in autumn and offers a dream setting for long walks and mushroom or chestnut picking in the open air.

In the Gallo-Roman period, Albi was a renowned centre of activity and became the Civitas albigensium. In order to protect his town from insecurity, the bishop Saint Salvi had his city surrounded by a fortified enclosure which disappeared in the 18th century after having endured without too much tragedy the Albigensian Crusade, the Hundred Years War and the Wars of Religion. When Catharism spread in the South, Albi and his viscounts, the Trencavel, took his side in a struggle that was fiercely fought against those who were known at the time as the "bonshommes". So much so that the name Albigensian was eventually given to the Cathars and the crusade that followed. And yet Albi escaped misfortune. The bishops, who became lords of the city, will build an imposing citadel, combining the palace of Berbie and the cathedral, to prove their victory over heresy. Albi thus develops around the episcopal city, covering an area of 63 hectares. In order to meet the need for rapid construction with available and inexpensive materials, the choice was made for Languedoc bricks. Later on, patrons such as Louis d'Amboise would make a few modifications and, according to architectural trends, embellish it.

To our great delight, Albi has kept the traces of its past, preserving its medieval-looking districts and their interlacing alleys

Visits not to be missed

We will obviously start our discovery of Albi with the Cathedral of Saint Cecile d'Albi, the largest brick cathedral in the world. Between 1282 and 1480, the cathedral was built to signify the return of papal power in Cathar land. Its overwhelming silhouette of pink bricks and its immense 78-metre-high bell tower as a watchtower over the region, in the heart of the old Albi, earned it the title of masterpiece of Southern Gothic. This veritable brick vessel, often compared to a fortified castle, was part of the city's defensive system (including the Palais de la Berbie) and could accommodate 6,000 Albigensians in case of danger. From the Middle Ages, it preserves the fresco of the Last Judgement (which originally covered more than 200m2), where Heaven, Earth and Hell are staged. The frescoes of the vault form the largest and oldest ensemble in France. It remains the only cathedral in Europe whose walls and vaults are entirely painted over an area covering nearly 18,500m2. The rood screen, in flamboyant Gothic style, is adorned with a magnificent polychrome statuary, a unique testimony to 15th century French sculpture. The treasure room, housed in a former 13th century vault, presents a collection of sacred art from the 14th to the 19th century, and objects of worship. Finally, Saint Cecile, patron saint of music, would not have a sanctuary without a monumental organ! This one dates from the 18th century and if you have the opportunity to listen to a recital, don't hesitate!

Further down, the Palais de la Berbie, an imposing 13th century fortress, stands at the foot of the Albi cathedral and dominates the Tarn. It is within the walls of this prestigious building, formerly the Bishops' Palace, that the Toulouse-Lautrec museum was set up in 1922, bringing together the world's most important collection of this Albigensian painter. It houses more than 1,000 works, paintings, lithographs and drawings, as well as the 31 posters that made the artist famous. This exceptional collection retraces all of his work, from his early paintings to his last canvas, through the Montmartre years and the world of theatre and café-concert, and illustrates each facet of his talent in an exemplary manner. The museum also presents collections of modern art, friends and contemporaries of Toulouse-Lautrec, as well as artists who lived in Paris during the inter-war period

To complete your Albigensian tour, you will also have to cross the Pont-Vieux, built in 1035 and part of the city's identity, visit the Fashion Museum, the Laperouse Museum or the Maison du Vieil Alby

Similar to Tuscany, the Tarn conceals a multitude of very typical and authentic small villages. The town of Albi could well be a French Florence, drenched in sunshine as the poet said. At lunchtime, we like to take advantage of the dolce vita albigeoise to sit on the terrace to enjoy a small local dish. At dawn, the terraces of the restaurants and cafés in the city are set up, bringing this still life to life. It is obviously within the historic district that most restaurants are concentrated, especially around the Place du Vigan, on the Place Sainte-Cécile, or in the bewitching maze of the old alleyways of the ville  : rue Castelviel, for example, with the clos Sainte-Cécile and its former playground overlooking the cathedral bell tower, the unmissable Vigan in front of the contemporary fountain illuminated in the evening, the very Iberian patio of the Lou Sicret for more discretion and privacy, the terrace and small patio under the wisteria of the Lautrec, or even the interior terrace of the Classic', a little out of the way from the centre. Don't miss either the terraces opposite the stone lacework of the cathedral porch or the beautiful terrace of the halles. All of them are an opportunity to savour the local cuisine as much as the spectacle of the historic architecture and the variations of light on the pink bricks of the city, while enjoying the peace and quiet that reigns there. Then, after a visit to the thousand-year-old Gaillac vineyard, located a few kilometres from Albi, get ready to sit down to dinner: charcuterie, truffles, goat and sheep's cheeses, the restaurant menus smell the flavours of the South-West.

When? All year round, spring and autumn being the most advisable seasons

Get there. By car, train or plane (via Toulouse or Castres), everything is possible.

OUI.sncf - More information on the site 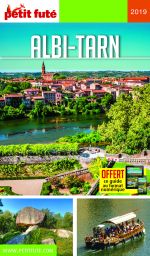