On the tip of West Africa is Senegal, a country that offers travellers a guaranteed change of scenery. Each corner of this territory differs according to its panorama, the people who live there, their cultures and their lifestyles. Once divided into several kingdoms, this republic is now united, but some local diversities and practices have been maintained over time. This only enriches the experience of any foreigner who wants to discover the area. Here are some examples of the favourites to find. Less than six hours from Paris, you can't refuse...

The Sine-Saloum region is an essential destination during a stay in Senegal. A delta, classified as a UNESCO World Heritage Site since 2011, where the two rivers of the Sine and Saloum meet. A natural area of islands around the country's second largest national park, the Saloum Delta.

Let's start with Joal, a small fishing village, which is the border town between the Petite Côte and the Sine-Saloum. It is here that we find the childhood home of the first president of the country Leopold S. Senghor. From here you can access Fadiouth Island, a mandatory stopover. Its people, mainly Christians, unlike the rest of Senegal, are from the Guelwars of Guinea-Bissau and the Serères of Saloum. The church of Saint-François-Xavier is the pride of the island as well as the sacred baobab tree, 800 years old. Legend has it that he never lost his leaves!

By staying within the theme, we discover in Samba Dia the largest baobab in the country. Surrounded by a classified and protected forest, it is so large that you can visit its interior. This village is a pleasant stopover on the way after Joal.

Continuing on the desert road towards the centre of the region, we arrive in Ndangane. More touristic than other villages but nevertheless very pleasant. We appreciate here the return of fishing and the traditional wrestling fights that are regularly organized, a real show! For those who are looking for more idleness, just take a canoe in the direction of Mar Lodj. A small village in the centre of the island will delight lovers of African art. But, a short break on one of the beautiful beaches surrounded by mangroves is essential!

Coming from Samba Dia or Ndangane, you must pass to Palmarin before reaching the islands. The paved road is being transformed into a track and vehicles are becoming increasingly rare. The road to the end of the world is very real.... Palmarin is located on a language of land surrounded by the ocean. The panorama will impress even the most indifferent.

The islands and the Serere Country

Let's head south to the entrance of the Parc du Delta du Saloum and the heart of the Pays Sérère. The Sererae are the third and oldest ethnic group in Senegal. The history of this people, who originated in the central-western part of the country, is largely documented and can be traced back to prehistoric times thanks, among other things, to the megalithic circles found on the territory. Even today, we can still find their traditional dwellings, their language, their festivals and their customs. Very welcoming, the Sérères like to share their stories and traditions. Let's dive into the heart of this country...

Djifer, the first village in the Serere Country but the last village before the ocean, is the starting point for visiting the mystical land of Sangomar Point: the currents have created the breach that separates the island from the territory, but the locals prefer to explain this phenomenon differently through their legends... Do not hesitate to ask them, they will tell you about them with great pleasure and passion.

One more canoe (but it's the only way to really experience this region!) and let's set foot on Dionewar. The idea of "no stress" resonates throughout this island. Transport is by horse-drawn carriage, bicycle and of course on foot. One of the most beautiful islands in Senegal and one of the largest too. Kayak lovers will find their happiness, as well as sand lovers.

The waters around these islands constitute the Saloum Delta Nature Reserve, a park classified by UNESCO since 2011. The biodiversity is impressive: here we find several animal and plant species that are not found anywhere else in Senegal. Manatees, river dolphins and marine turtles live in harmony in this mangrove paradise. Many canoeists, accompanied by eco-guides, offer walks through these waters, especially to Bird Island. This uninhabited land is the breeding ground for several hundred species of birds that can only be seen here in the wild. A unique excursion not to be missed.

The Sine-Saloum is very rich in natural spaces. After visiting the Delta Park, near the shore and towards the Gambian border, we discover the Fathala Reserve.

Extending over 6 hectares, the reserve is managed by South Africans who are passionate about fauna and flora. Their goal is to rehabilitate several endangered species and maintain a natural space where animals can live together in peace. Giraffes, buffaloes, elk, zebras and warthogs are already found there. But the stars are the lions! The latter came from European zoos as cubs and became the real "stars" of the reserve. Walks with them are organized for the pleasure of all.

Bou El-Mogdad and the Fouta region

Once in the north of Senegal, far from the Sine-Saloum, the landscape changes completely: the ocean turns into a river, the traditional huts into colonial houses and the Sérères into Saint-Louisiens. The Saint-Louis region extends over the entire northern border with Mauritania. Only the Senegal River separates the two territories. In Saint-Louis itself, we find the mooring place of the famous Bou El-Mogdad. From 1950 to 1970, this Dutch ship was used to transport goods along the river to Podor. 5 years later, the ship was bought back in order to organize cruises. After spending some time in Sierra Leone, Guinea-Bissau and other parts of Senegal, in 2005 the ship returned to Saint-Louis... and stayed there! One-week cruises are organized from October to May: departures from Saint-Louis or Podor. Many stopovers are available during the trip. Here are a few moments that will seduce you.

A traditional lunch with the Wolof people in Dagana and a visit to the old fort (now renovated into a hotel complex). The Wolofs have principles that are very dear to their hearts, they will not hesitate to share their thoughts with their guests.

The discovery of the Toucouleurs villages near Thiangaye, built entirely of earth on the banks of the river. These villages are among the oldest in the country, some dating back to the 13th century. The Toucouleurs are native to the Fouta region and are the root of the country's Islamization. Very welcoming, maybe a mechoui will be organized to celebrate your arrival!

These few notes are far from having covered all of Senegal's wealth. Each region is unique, rich, full of unforgettable experiences. But they are deserved! So do not hesitate to meet people, to discuss with them, it is the best and most pleasant way to understand a culture so different from ours. The Senegalese welcome and smile await you. We assure you, you will not be disappointed

When? When? The weather is good all year round, but ideally, from October to May to fully enjoy the parks.

Getting there. Several direct flights per week from Paris and Marseille. 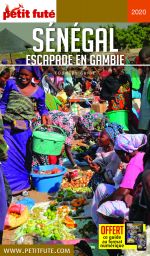 In France, social distancing measures linked to the coronavirus epidemic have been extended, for the moment until May ...

A multicoloured and multi-ethnic country, Senegal appears to be a formidable melting pot where diversity and tolerance ...

Where to go in February? Where and when to go: destinations and tips

To keep fishing in the heart of winter, there's nothing like a little trip! Where to go in February? Here are a few ...