Based on the cycles of the moon and sun, the Chinese New Year's date varies every year. On this occasion, festivities are organized in many cities. The streets are decorated in red to chase away evil spirits and grandiose fireworks are fired before giving way to the famous parades. Petit Futé offers you a top 10 best places to celebrate the Chinese New Year!

The Chinese community of San Francisco is the largest in the world after Asia. During the New Year, Chinatown is in turmoil: flower market, artistic and cultural demonstrations... But the highlight of the festivities was the big parade. Considered one of the most beautiful in the world, it reflects the image of the United States: oversized! a hundred tanks, a 60-metre long dragon carried by more than a hundred people... An American-style Chinese New Year's Eve!

Soho is London's Chinatown. Most of the festivities take place in this district, but the big parade takes place in the heart of the city. The streets are packed with visitors who have come to watch the dragon parade. The parade takes place on the Sunday following the New Year, this year on February 14

China's largest city lights up throughout the "Spring Festival". Nanjing Road, the city's main artery, is dressed in its garb of light and the inhabitants are vibrating as a whole as they await the countdown. As in all Chinese cities, there are many festivities. Not to be missed: the lanterns of the Yuyuan garden

The New Year in Hong Kong is a delicious blend of modernity and tradition. The city has a special status and the proposed festivities reflect it. A huge fireworks display is fired over Victoria Harbour on the second day of the New Year and residents crowd into the various flower markets. You can also admire many folk dancers.

The city's strong Asian community continues its traditions and offers a more splendid spectacle every year. Popular music, folk dances, dragon parades... In total, more than 30,000 participants are in charge of the festivities in front of tourists and conquered Vancouverites

In Paris, festivities are concentrated in three districts: the 13th arrondissement, the Marais and Belleville. Large parades are taking place for the occasion, Parisians and tourists are invited to come and celebrate the transition to the New Year! The 13th arrondissement town hall organizes, in parallel, conferences, concerts and shows designed to promote the various cultures that make up the wealth of this borough.

The capital is a real open-air theatre during the Chinese New Year: temples open up and become places of celebration, martial arts and folk dances are performed throughout the city... Not to be missed: Ditan Park covered with red lanterns

Singapore, the multicultural world, gives pride of place to the Chinese New Year. Three-quarters of its inhabitants are, in fact, from China! Night shows, martial arts.... More than 700 artists are gathered to celebrate this event as it should be

When Chinese and Thai cultures merge, it's in Bangkok! The most spectacular events take place in Nakhon Sawan, north of the city: night parades, dragon dance... But Chinatown is also bursting with enthusiasm and offers countless small concerts and a wide choice of street food. Immersion in the local culture guaranteed!

In Australia, it is in Sydney that the Chinese New Year is most spectacular. Celebrations usually start in the city centre and end with a fireworks display in Darling Harbour's Chinatown. Like other cities, parades, dragon dances and demonstrations by folk dancers are on the agenda. However, the originality of this Australian Chinese New Year lies in the famous dragon boat race organized every year! 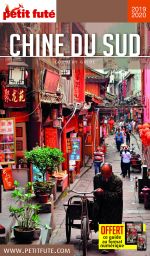 10 destinations to work while travelling with the PVT

The Working Holiday Visa Program (P.V.T) allows you to discover a country, while being able to work on site. Reserved ... Read the article

Markets reflect the country's culture. There are the most typical foods, which highlight the local culinary art, but ... Read the article

Halloween, a famous overseas party, is actually born in Ireland. In the Middle Ages, the festival "Samhain", "end of ... Read the article