Petit Futé's opinion on MAY VALLEY

"It's a unique tree. It's the prince of palm trees. I think it's the tree of the science of Good and Evil," said British General Charles Gordon in 1881, which came to a tragic end in Khartoum. A fervent Christian, half-poet and half-philosopher, the man who was also called Gordon Pasha was so captivated by the Valley of May that he thought he had located the mythical Garden of Eden, the original paradise. In an essay dedicated to him, he stated that the coconut tree was the tree of Knowledge and the artocarp (breadfruit tree), the tree of Life. Original Paradise? At least a tropical paradise... In any case, this famous cocofesse is one of the most astonishing curiosities of the plant world. It has unquestionably become the symbol of the Seychelles (look at the stamp that the customs officer put on your passport on arrival!). The cocofesse has therefore naturally aroused a lot of covetousness and several legends. What would have become of this Vallée de Mai without this bilobed walnut with a worldwide reputation? In any case, since 1983, it has been listed as a UNESCO World Heritage Site - a consecration for this green cathedral which, until 1930, had the rare privilege of being little affected by man. Its new owner then decided to transform this almost primitive forest into a botanical garden by introducing ornamental trees and imported plants.

Fortunately, twenty years later, the precious valley would change hands again, the State having appropriated it as part of the island's main water catchment area. It became a nature reserve in 1966 and became a national priority. In order to restore it to its original appearance, it was necessary to eradicate the already invasive exotic plants, revegetate the ridges of summits that had been burnt down (the rows of chalices of the pope, a wood with little fuel, used as a firebreak) and maintain the coconut forest. This was a long-term objective, all the more justified since a fire in 1990 had ravaged 40 hectares of the Fond Ferdinand palm grove at the southern tip of the island, destroying the last relict forest of Praslin (now fortunately restored).

Three decades have not been enough for the Vallée de Mai to regain its pre-1930 quasi-virginity, but the reconquest is well under way, especially since the Seychelles Islands Foundation was created in 1979 to manage and protect the fauna and flora of Aldabra (another World Heritage site), has since 1989 been carefully managing this preserved valley, which is nevertheless threatened by the appetite of the philodendron, this parasitic climbing plant (which sucks the sap from the tree) having in fact resisted attempts to eradicate it. Some fifty thousand tourists each year get caught up in this canopy of foliage and this tangle of roots, creepers, mosses, dead leaves and rocks. All you can hear is the murmur of streams (the valley has seven springs) and the whistling of black parrots, which come back to nest here after having wandered several leagues around. Don't miss the gully on the circular trail, a grove of five of the six palm trees endemic to the Seychelles and three of the four species of vacoas unique to the granite islands. Here you can imagine what the tropical world must have been like millions of years ago, when palm trees predominated and flowering trees, birds and mammals did not exist. Here we are in a forest of ferns and palms in Jurassic Park. Some seven thousand coconut trees (56% male) have been recorded in this valley, 80% of which are still too young to produce, the trunk only appearing in their fifteenth year. Becoming adult at forty years of age, the tree can live for more than four hundred years; the oldest, about 30 metres tall, is currently about three hundred years old. This Casanova of the Vallée de Mai remains valiant judging by its phallic appendix. How many cocos de mer has it produced? From the fertilization of the female tree to the fall of the large bilobed nut (from 14 kg to 23 kg when it is full), it takes in any case seven years, whereas a normal coconut falls at six months. It is estimated that three thousand of these extraordinary nuts are collected annually (only the most callipygous ones), both in the valley and in Fond Ferdinand, some owners also producing them with their private coconut trees. These happy producers are nevertheless forced to sell their coconuts to the Ministry of the Environment, which buys them at a low price and sells them at a higher price, the producer being able to recover only half of his production. Before they are sold, the precious nuts will of course have been stripped of their flesh before being glued back together and possibly polished. The two hemispheres of this sacred coconut will then take their place on the shelves of souvenir shops, which are authorised to sell only two of these nationalised marvels each month, duly numbered, their price varying according to their perfection. If palms reign supreme in this exceptional sylve (this sanctuary of eight species - six of which are endemic - representing the world's largest concentration of diversified palms in an original environment), other trees also thrive in an almost mystical atmosphere.

Botany enthusiasts will be delighted. They will be able to observe the mango tree, the jackfruit tree, the capuchin, the pope's chalice, the traveller's tree, the breadfruit tree, the albizzia, the filao, the hardwood, the redwood and the cacao tree. But isn't the main thing to see, feel, listen and let yourself be enveloped by the protective vegetation of this fascinating ex-island of Palms the aptly named! One comes out a little carried away from these paths which it is preferable to discover early in the morning, before the groups of excursionists come to disturb its serenity and some honeymooners engrave their first names on the trunks of the trees, these graffiti by weakening some of them. A coffee-snack and a shop are set up in the small house where tickets are issued, but there is no mosquito repellent cream. However, there are times when you need it. Hell is never far from heaven...

Circuits. Signposted circuits follow the remarkably well-maintained paths of this forest, so perfect that it looks as if it has been reconstituted for a new Indiana Jones, and whose listed part covers 19.5 ha. From the shortest (about 1 km) to the longest (about 2 km), each of these routes is enchanting anyway. At the entrance, you will be told that the routes take 1 hour, 1 hour 30 minutes and 2 hours respectively. In reality, these hikes are much faster and do not present any major difficulties.

Yes, if you are solo. This will allow you to enjoy the quietness of the place while having all the information about this little piece of earthly paradise.

No, if it means that you will be with a group of 15 to 20 people (which is often the case). You will certainly have information, but, on the one hand, it is not certain that you will hear everything, since you will not be alone and, above all, you will not enjoy the main charm of the place, namely its calm and wild character.

At the Vallée de Mai, a good part of the pleasure lies in the fact that you are alone in the middle of nature, with the only noise being that of the leaves rustling in the wind. Walking with a group can really ruin the experience. So if you can't afford a guide for yourself and your partner, visit the park on your own. The explanatory signs are numerous, so you won't get lost!

Information on MAY VALLEY

Members' reviews on MAY VALLEY 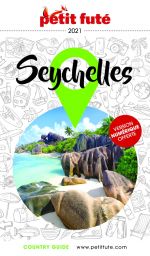