It is known that Porto, the leading city in northern Portugal, was once a Phoenician trading post. However, Greek mythology claims that it was the Argonaut Cale who founded a city there. Portus Cale, established in the 1st century BC on the right bank of the Douro, became the name of a prosperous Roman port colony. It was then plundered by Nordic and Moorish peoples before the Kingdom of Portugal and its feudal lordship were established in 1143. Two centuries later, the city of Porto was walled in. Thus, its port was protected and its historic centre was framed by the so-called Fernandine walls (so called because they were built during the reign of King Dom Fernando). Still standing today, it is to this wall that we owe the exceptional preservation of the medieval city, which is ideal for long contemplative strolls.

Then came the 15th and 16th centuries: those of the oceans and the great discoveries! Under the leadership of Henry the Navigator, Portugal became an undisputed naval power and became richer for half a millennium, both commercially and culturally. A simple stroll through the city will suffice to grasp at a glance the breathtaking architectural diversity that characterises Portugal's second city

On the marine side, in order to better understand the conditions under which these daring sea wolves lived and how they returned from these distant lands, we can only recommend a visit to the instructive and entertaining World of Discoveries museum. Until 2022, the museum is taking part in the celebrations to commemorate the5th centenary of the first round-the-world voyage by ship, undertaken between 1519 and 1522 by the famous Ferdinand de Magellan

Discovering Porto from its river

Oporto is a city full of life, with many visitors coming to enjoy the charms of the Portuguese city. Just look at the bustling São Bento station in the upper city. Built in the 9th century on the ruins of the former convent of São Bento da Avé Maria, the comings and goings of travellers enliven the Hall of Lost Steps, which reveals an incredible fresco of 20,000 azulejos referring to past Portuguese conquests. Adventurous and open to the ocean, the city has over time integrated into its urban fabric a thousand riches gleaned from the Indies and America. Thus, during a stroll through the city, one can observe the wooded scrolls that surround the stained glass ceiling of the old Lello library, before going to see the gold-covered woodwork of the São Francisco church, the fruit of the great navigators' trades. This national monument is one of the most outstanding examples of Portuguese Baroque, and the superb altarpiece in the choir, depicting the Tree of Jesse, is one of the most impressive masterpieces in gilded wood. Then take the path leading to the flowery gardens of the Palácio de Cristal, to enjoy the pleasant green space in the city and to have a breathtaking view of the mouth of the Douro River and the Atlantic Ocean from above. Not forgetting the Clerks' Tower, the work of the Italian architect Niccolo Nasoni, built between 1691 and 1773. Its 240 steps overlook the saffron-coloured monochrome of the roofs and the river below. This is where Porto originated: in the heart of the picturesque Ribeira district, on the banks of the Douro. To fully appreciate the beauty of the city, pass by theSé cathedral - a baroque citadel whose altar is carved from several hundred kilos of silver - and, after a gourmet break in one of the cheeky seafarers' canteens, it's on board a barco rabelo that the city's jewels are revealed. This traditional flat-bottomed boat - once used by the winegrowers who came to deliver their barrels to the city - is best suited for a short and refreshing cruise between the two banks. Starting from the emblematic Praça da Ribeira and its delightfully dilapidated facades, there is an array of colourful houses covered in earthenware, at the foot of which street performers mingle with locals and visitors quietly sipping port wine on one of the terraces. The imposing neoclassical building of the Palácio da Bolsa (Stock Exchange Palace) can be seen overhead, while to starboard the panorama of Vila Nova de Gaia unfolds. The city, which is part of the District of Oporto, is immediately charming with its string of long buildings with red-tiled roofs. It is under some of them that the excellent wines of the Douro Valley are matured. The river walk continues with a passage under the Dom-Luís arch bridge, another emblem of the city whose style and steel have earned it the sobriquet of Eiffel Bridge, before catching sight of the monumental Mosteiro da Serra do Pilar (Monastery of Serra do Pilar) in Renaissance-Mannerist style and dating from 1672. These two buildings, together with the Ribeira district, have been listed as a UNESCO World Heritage Site since 1996. When dusk arrives, the Douro is adorned with a shimmering orange-pink glow. This is the ideal time to stop for a gourmet meal and try some of the local specialities, or to take a contemplative stroll along one of the two banks.

The epic of Magellan

"Suddenly this little unknown captain, Magellan, stood up and declared with absolute assurance: "There is a passage leading from the Atlantic Ocean to the Indian Ocean. I know it, I know the exact place where it is. Give me a fleet and I'll show it to you and I'll sail around the Earth going from east to west." These are the words used by Stefan Zweig in 1938 in his biography of the supposedly Porto-born explorer. The period 2019-2022 marks the 500th anniversary of the first circumnavigation of the globe by boat. Led by Fernão de Magalhães (Magellan's Portuguese name) and financed by Spain, the expedition, which was supposed to extend the Spice Route westward, consisted of five ships and no fewer than 250 men. It was in the summer of 1519 that the flotilla set sail from Seville to reach the Canary Islands and then the Bay of Rio, before turning south to go around the continent. During the wintering in Patagonia, a mutiny was suppressed by the explorer and then, at the cost of a beached ship, the Strait of Magellan was finally discovered. It then took him more than three and a half months to cross a second ocean, then Pacific, and reach the Philippines in March 1521

While Magellan tried to convert a king - Lapu-Lapu - to Christianity, a battle broke out and the Portuguese was killed by a poisoned arrow. The rest of the crew nevertheless completed the first circumnavigation in human history, reaching Cadiz in September 1522. It is this expedition in particular that the World of Discoveries Museum - presenting the history of Portugal through the prism of its naval power (models, reproductions, interactive screens, a voyage through the ages and continents...) - proposes to discover, through the character of Magellan. The museum also participates in the commemorations and programs of rapprochement between peoples taking place until 2022.

When? Porto has a temperate climate. Temperatures are mild, with winters around 15°C and summers averaging 25°C, while the shoulder seasons offer beautiful periods of sunshine. Porto can therefore be visited all year round, with a preference for autumn if you are walking through the Douro valley, which is full of colour at that time.

Getting there. If the plane is fast and cheap, it is possible to take the train or your car. 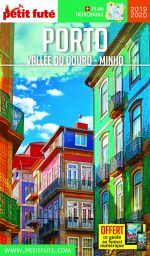 Porto, a famous city in the north of Portugal, is one of the top destinations for travellers who wish to discover the ...