Petit Futé's opinion on THE FLON

In the 19th century, goods arrived from the port of Ouchy or the railway station. By digging the metro, businessman Jean-Jacques Mercier facilitated traffic. Goods were deposited on rails and took the Bel-Air lift (which today leads to the Fnac) to continue westwards to the Chauderon station. The traffic stopped in 1974 and the old warehouses were taken over by culture before becoming objects of covetousness for large groups. Today, among the 19th century buildings in Le Flon that have been preserved are those of the N2O bar and the Butterfly store. For the Mercier family, constituted as LO Holding, Le Flon has long been a hole to be developed. In several former warehouses, the cellars are magnificent and still undeveloped. Go into the former customs warehouse at No. 17 (opposite Maniak): you will first see a large glass roof and, in the basement, a vast space under arches but simply used as a storeroom for the shops on the ground floor.

From Le Flon, you can see, just above, the building of the recently renovated Métropole Lausanne shopping centre, as well as the Bel-Air tower, Switzerland's first "skyscraper", which appears here much longer than it is high up. You can also see the House of the People, sometimes humorously called the "Kremlin". It houses the seats of the Socialist Party and the People's Worker's Party.

Today, in addition to art galleries, the Flon district is home to the well-known discotheques of the MAD and the Atelier Volant (opened in the 1980s), trendy bars such as the Pur and the N2O, apartments and studios of photographers and architects at very high rents, a jazz school, and an increasing number of shops.

In winter, there is a free ice rink at Le Flon.

Thus, the Flon has earned its letters of nobility and many Lausanne residents say that the new alternative centre of their city is now moving further west. Artists tend to move towards Sébeillon and Malley. The disused Sévelin railway station has been transformed into a professional school and culture has taken over the former warehouses: the Docks, the Sévelin 36 dance school, the Arsenic theatre. Further on, in Malley, the Kléber Méleau theatre is located in the former gas factory.

transport
accommodation
Stays
On the spot
Share on
You are the person in charge of this place, click here 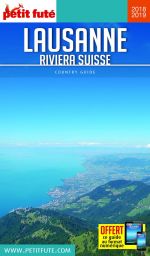