A "crazy" square, as the Tharaud brothers described it: the mythical epicentre of the city that will never cease to captivate.

"The Square was both the end of the universe and the birth of exile, of a paradise fallen and flattened by the footsteps of passers-by and itinerant travellers where, around the fire of the tale, we revisited the phantasmagorical moment of genesis. Thus, if the Square was a crossroads delimited by the police station, the minaret of the Koutoubia and the old Moroccan bank converted into a museum [...] the triangular borders of this forest of the story were, for us, nothing but pure fantasy where fantasy and sacrilege mingled." (Rachid Mansoum, Jemaâ El Fna Square, Marrakech, Evanescent Places)

More than just a public square, Jemaâ el-Fna is the star attraction and has long been the initiatory crossroads of Marrakech. Here, day and night, it vibrates and pulsates. It is the liveliest place in the city and brings together tourists and locals alike! You can go up to the rooftops: it's an impression of flatness: everything is built like a big stylish checkerboard that gives the illusion of being able to walk above the city.

It is also from here that most of the walks start: towards the Ben Youssef medersa or the Bahia Palace (by taking the street just to the left of the Café de France) and the Saadian tombs. You will have to stay there, stroll around or simply pass by, even if it is only to park your car, on the orders of the guards who are always waiting there (be careful, never park on the square, you risk... the pound!).

The architecture of the square is not particularly original: no singular building except the Quessabine mosque, at the entrance of the souk, and facing the old Café de France. This same establishment, which has not moved one iota, with its large terraces, was hated by Lyautey, as its facade contributed, according to him, to the distortion of the square. At the other end, towards Mohammed V Avenue, the Club Med was discreetly installed in 1972 behind a wall covered with vegetation. It is now waiting for a potential buyer. Opposite, near the tourist police station, are the buildings of the Post Office and the Bank of Morocco.

History. Originally, this square was used as a Place de Grève: this is where criminals were beheaded and the heads of rebels or thieves were publicly displayed. From this cruel custom, which is lost in the mists of time, popularized by the Alaouites, the square got its current name which means "the assembly of the dead", or "the meeting of the dead"... A gloomy name that nothing justifies anymore, whatever the storytellers of the square say, who claim that, some nights, the souls of the tortured come back to haunt these places.

You must learn to appreciate this strange place, where the atmosphere of medieval squares reigns, a theatrical space of meditation and encounters, of mystery and entertainment. The best way to get in touch with Jemaâ el-Fna is first to observe it as a whole: climb up to refresh yourself on one of the many terraces. From these cafés, which are always full, you will discover a teeming universe, a permanent and ever-changing agitation. The spectacle is fascinating when the sun sets behind the minaret of the Koutoubia, while the dry clacking of the gnawi rattles can be heard (photographers, sound recorders, get your cameras!).

Until the inauguration of the new bus station near Bab Doukkala in 1982, the Jemaâ el-Fna square was the departure point for large taxis and rattling buses to other cities. A sort of vast souk, providing everything and anything, a veritable court of miracles, had then settled on the square, representing a sort of extension of the well-ordered souks (despite appearances) of the medina. This permanent presence of itinerant merchants had, certainly, the effect of energizing the life of the square, but also of considerably harming the commercial harmony of the official souks. This flea market was evicted when the new bus station was inaugurated, and there is no longer any trace of this era on Jemaâ el-Fna Square. Only the street vendors of cheap trinkets and loose clothes still walk around, looking for a good opportunity to sell their wares to tourists who are afraid of the souks: this is becoming increasingly rare, as everyone is able to tell the difference between the (overpriced) products of these street vendors and those of better quality and less expensive, specialized craftsmen in the souks.

The only transportation left is that of the horse-drawn carriages lined up in single file waiting for customers. They will take you at a slow trot along the ramparts or to the Menara basin for a romantic stroll.

A masterpiece of the oral and intangible heritage of humanity. In the 1990s, the square was under serious threat: there was talk of building an underground car park. In 1997, the Catalan writer Juan Goytisolo, who had literally fallen in love with Marrakech, sounded the alarm! In order to preserve all the cultural and artistic wealth that characterizes the place, he brought experts from UNESCO to Marrakech and created an association for the preservation of Jemaâ el-Fna Square. At the same time the nerve centre of the city, a symbol of social mixing and an essential meeting point between the two sides of Marrakech, this square is above all a setting where the expression of Moroccan intangible heritage (tales, music, dances, songs, gastronomy, folklore) is played out daily. Its international recognition was proclaimed on May 18, 2001 when Unesco included its name on the very selective list of goods classified as Oral and Intangible Heritage of Humanity.

A permanent spectacle. Like a play, Jemaâ el-Fna Square offers visitors scenes of life divided into three major acts. There is something for all our senses in perpetual alertness: for the ears, with the buzzing of the crowd (particularly compact on Friday evening) or the tambourines; for the nose, smells of leather, earth, spices and fresh mint. And finally for the skin, with the brushing of a djellabah or the brush of henna that will draw oriental patterns on your hand or ankle. In the morning, it wakes up as soon as the doors of the souk open, between 7:30 and 9:00 for some! It becomes a large open-air market. There are still few people, but already the wooden booths and the trailers of the freshly squeezed orange juice merchants are coming to life. The spice vendors set up their displays in the shade of mats supported by sturdy poles. The fruit and rare herbs sellers will arrive later, often from the surrounding villages. This is an excellent time to come and have an unusual breakfast: early in the morning, you will often be offered a second cup of tea or a second delicious orange juice (which is cheap), while the roasted peanut and pistachio vendor, his display just unpacked, will hand you a few seeds before starting a conversation. Moreover, at that hour, stalkers of all kinds - who, let's face it, are not lacking in the square - are not awake. So you can enjoy the morning pleasures of this vast esplanade in complete peace.

But the real show doesn't start until later in the afternoon (5pm is ideal). This is when the Gnaoua dancers, descendants of the black slaves of Guinea, appear and the acrobats of Amizmiz come to perform their human pyramids and spectacular dervish pirouettes, to the delight of the crowded onlookers. The square then becomes a monumental theatre stage where each actor takes place in the centre of a circle formed by the spectators, the haqla, blessed by a saint! It's time to watch the public writers, crouching in the shade of their black umbrellas, toil over their work, to wander among the jugglers, to listen to the storytellers tell you about the djinns (the genies) who hover over the minarets of the city or to evoke the fabulous treasures of the ancient sultans - treasures hidden in abandoned riads of the medina -, to be told fortunes by veiled fortune-tellers (a future that will be all the brighter for the numerous banknotes), to try one's luck by betting on the game of fortune-telling or other games of skill with convoluted rules, to admire the learned monkey-showers or the snake charmers who go so far as to surround the torsos of passers-by with their charming reptiles.. This is always better than being pawed by the tooth puller who waits for you sitting in front of a mound of quenots... In this colourful crowd of street performers, who vibrate to the sound of tambourines and flutes, the kids make their way by offering kesra (breads in the shape of barley, wheat or, more rarely, buckwheat cakes), honey pastries and doughnuts. The guerrab, the water carrier in a multicoloured suit, clad in copper or tin cups, is constantly shaking his bell and posing for the tourists' cameras. Be correct, thank them all with a few dirhams.

Finally, at sunset and as the animation becomes more intense, a smell of fried food, meat skewers, offal or grilled fish takes over the square where small strolling shops settle: Jemaâ el-Fna is transformed into a huge open-air restaurant. The acetylene lamps of the greengrocers and cafés gradually illuminate the square, which is slowly being emptied of its actors. You sit down and glue yourself around a small wooden table where you can enjoy a harira or a kefta skewer, facing a sheep's head, proudly displayed on the stall! Or you may be tempted by a bowl of snails bathed in a healthy broth whose recipe is kept secret. Jemaâ el-Fna becomes a haven of international conviviality, of quietude, of magic, in the meditation of the night.

During Ramadan, however, the square offers a slightly different vision. Its spectacle allows fasters to forget the hunger and thirst that plague their minds (and bellies), until the muezzin's siren sounds: the square empties at high speed while the nearby gargotes, serving harira and kebabs with ladles, fill up in a flash. Then, the hunger calmed down, the place fills up again and the show goes on..

Yes, we are in colors and an atmosphere worthy of the Middle Ages but the place, even if there is no more dirt, remains as bewitching, with its allure of crossroads caravan ... which is not to displease us. Wherever we go, we pass by it. 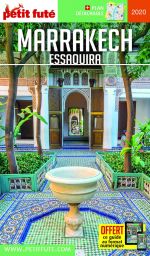