Saint-Tropez, the sweetness of spring in the most famous village in France

Saint-Tropez is certainly the most famous village in France, embodying both the charm of Provence and the dazzle of the French Riviera. This small fishermen's port was immortalized by a sensual silhouette in gingham shorts... and since then, stars meet there along with international finance pundits; all these nice people practice the local pastime: seeing and being seen! Saint-Trop' is certainly the "place to be" but underneath all the glitz and glamour lies Provence. A life-size postcard to be discovered with happiness in the mild spring.

In Saint-Tropez, history is on the agenda!

For a long time, the history of Saint-Tropez was written with a bellicose pen, to the rhythm of attacks and rebellions which continued long after the construction of the four towers and the citadel. This stone necklace was first hated by the Tropezians in the 16th century before becoming their pride. Located on the heights and overlooking the village of Tropez, the elegant lighthouse offers a gentle walk in the company of peacocks; its view of the entrance to the gulf is breathtaking. After walking around the building and admiring its moat, you enter the heart of the citadel, passing the bronze defence cannons at the entrance to the drawbridge. The citadel houses the Musée de la Marine, which recounts the naval past of Saint-Tropez and its port, as well as the history of the Bailli de Suffren, Saint-Tropez's hero. His bronze statue stands proudly in the port, reminding us that the famous sailor saved Saint-Tropez from several sea attacks.

Among the religious monuments, do not miss the chapels built in the early sixteenth century, including the chapel of Sainte-Anne. It was erected on Mount Pécoulet, close to the sky, to thank the sky for having protected Saint-Tropez against the plague which raged in Provence in 1720. But the star of the clichés and other tourist brochures remains the parish church of Notre-Dame-de-l'Assomption and its baroque dress which raises its pretty ochre and earthen bell tower above the red tile roof of the village.

As far as culture is concerned, we go straight to the Musée de l'Annonciade. It is in a way a historical museum: its collections bear witness to the pictorial avant-garde which had elected here muse and stronghold. Paul Signac, as a scout, invited Matisse, followed by Derain, Bonnard, Braque, Dufy... Thus, for no other reason than its beauty and its light, Saint-Tropez was the workshop of the first canvases of modern painting, now on display in the museum..

You've earned it! With your Hermès Vintage bath sheet, you can enjoy the most natural part of St-Tropez: its coastline. From Saint-Tropez to Tahiti beach, the marked path runs along the peninsula for nearly 13 km, offering its carpet of golden beaches to the eyes of the Mediterranean. Some of them border the town and others, which can be reached by boat, are nestled in the hollows of the creeks. The great game of the summer is to alternate the beautiful blondes: the popular Bouillabaisse, the adorable Ponche, the wild Graniers, the typical Canebiers, the secret Moutte, the charming Salins and then all the celebrities of Pampelonne. Located in the commune of Ramatuelle, Pampelonne has 4.5 km of fine sand divided into about thirty private concessions, just like the world-famous beach in the series "Sous le soleil"! Each one has its own look and atmosphere with bars, restaurants, mattresses and parasols

But Saint-Trop' is above all Saint-Tropez, a small Provencal village proud of its traditions. This is demonstrated by the famous Bravades which take place in homage to the tromblonnade and the martyr Torpetius. For three days, processions and fanfares of fifes and drums signal loud and clear the attachment of the Tropezians to the history of the city.

Provence: a whole lifestyle, the art of knowing how to take one's time and stroll along the quays of the little Ponche harbour or in the pink and ochre-coloured alleys of the fishermen's quarter, slowly in the morning, not too quickly in the afternoon, and in the evening... The port faces west, bathing its facades in the golden light of the sunset, which reflects the whole shimmering palette of the village. Sit down for a moment on the famous "bench of lies",

quai Jean-Jaurès, immerse yourself in the blue of the sea and then turn towards the adorable village: this is an indelible postcard.

To grasp this unique atmosphere, you must sit on the terrace of the Café, Place des Lices, at aperitif time to watch the petanque players' show. Under the hundred-year-old plane trees, the major competitions are played, but above all the small, fierce games between the village's top players

In Saint-Tropez, happiness is (also) in the plate!

On Tuesday and Saturday mornings, the petanque players make way for the cheerful stalls of the Provençal markets. The smells of the South fill the air: herbs, spices, olives, goat's cheese and lavender, while the fruits and vegetables compete with each other on the stalls. Honey, nougat, calissons, candied fruits, jams and almond or aniseed biscuits make a splash with the savoury specialities: tapenades, aïoli, ratatouilles and aubergine ristes... a real poem! The fish market, Place aux Herbes, is filled every morning by fishermen with the VIPs of bouillabaisses and other bourrides: monkfish, red mullet, sea bream and scorpion fish.

The Mediterranean is present even in the plate which is honoured with beautiful compositions: bass with fennel, piccatas of monkfish, royal sea bream, minestrone of squid, salmon marinière, etc. Saint-Tropez is also located in a highly gastronomic area and can therefore count on a rich and varied terroir. The unavoidable aioli or garlic-based cream, in which vegetables and boiled fish are dipped, is a pure delight, as are the pistou soup, the daube, the tians (vegetable gratins), the truffle brouillade and the game specialities. All of this is washed down with the AOC wines of the Var, including the Côtes-de-Provence and Bandol, which are particularly well known for their pinkish colour!

The village also boasts sweet specialities, such as the famous tarte tropézienne, the full recipe for which is not given, even if you can guess a few drops of orange blossom in the cream that tops the two layers of sponge cake

When to go? In summer, to experience the "Do you do you Saint-Tropez" while arming yourself against the traffic jams on the coast; at any time of the year for a more authentic Saint-Tropez. Spring and Indian summer are ideal times

How to get there. By car (A8 from Marseille-Aix exit 13 and from Nice exit 36), by train (Saint-Raphaël, Les Arcs and Toulon are nearby and linked by bus) or by plane (Toulon or Nice airports)

TOURIST OFFICE OF SAINT-TROPEZ - More information on the website 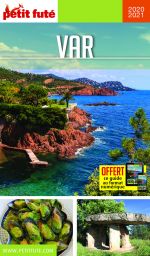 The 10 favourite destinations for celebrities in summer

Paparazzi in the making, are you looking for a destination where you can share your holiday photos with the most popular ...

The tabloids praise its jet set, rhinestones and sequins, but the Côte d'Azur is above all a land that cultivates its ...