In the heart of a 30-hectare forest, Zoodyssée offers to discover more than 90 European species. A green setting for nearly 800 animals whose environment remains close to their natural habitat. The park is divided into four thematic zones, the first one without any particular name is reserved for deer, wolves, turtles, raccoons, bison observatory, mini-farm and vivarium. The following areas are themed around the countryside, the mountains and the Mediterranean. There are red foxes, storks, porcupines, monkeys, flamingos, otters, birds of prey, mules and Poitou steers, isards, wild boars, aurochs, brown bears and many more. At the mini-farm, come and meet the Jersey cow, the Poitevin goat, the Marans hen, the Parthenaise cow or the Ouessant sheep.
Each year, new species are introduced into a completely transformed world to see them in a different way. Go on an expedition in the Nordic Odyssey to observe lynxes, snowy owls, reindeer, among others, continue with the Mediterranean Odyssey, to admire pink flamingos, Barbary macaques, and take part in the scent game. Once you have passed through the mountain chalet, you can follow in the footsteps of the bear, under the eye of the isards, marmots and ibex. Have fun on the wooden statues and mountains to climb. The more adventurous will cross the valley of the scavengers to admire the griffon vultures, the Egyptian vultures and many others. Don't miss the playful and charming otters, but when it's time to eat, they use all their agility and cunning to eat the fish. Observe the local emblem of the Chizé state forest, which has the most studied deer population in the world. The history of this apparently fragile animal will surprise you during this surprising encounter.
As for activities, the youngest will enjoy blowing out their candles in the heart of the park after a treasure hunt that will lead them to meet the animals! As for the enthusiasts, they can become "caretakers for a day" and follow the animal team in its daily life. And everyone will enjoy discovering the park from the horse-drawn carriage, with the enlightened comments of an animal keeper. Numerous activities for the whole family, all year round.

Zoodyssée is also committed to animal welfare and sustainable development. It counts no less than 170 births each year. Zoodyssée is a committed player in the preservation and conservation of species. The park presents endangered species and makes the public aware of their fragility, in particular with the Griffon vultures, Egyptian vultures and many others. To do this, it relies on a first-rate environment, with the presence of a CNRS laboratory, the National Office for Hunting and Wildlife, the National Forestry Office and the Institute for Training and Research in Environmental Education. Finally, through its conservation farms, Zoodyssée is involved in the preservation of three species, symbols of the erosion of biodiversity in France: the little bustard, the European cistude and the European mink. The aim is to strengthen the wild populations. Efforts rewarded in 2019 by the birth of four baby minks. A first in France for this critically endangered carnivore.
The state forest of Chizé is a relic of the ancient Argenson forest which separated the territories of the Pictons and the Santons. The site of the American military camp, closed in 1967, has now become an integral biological reserve of 2,600 hectares, i.e. almost half the surface area of the forest, between the departments of Deux-Sèvres and Charente-Maritime.
Affected by the storm of 1999, it is now the subject of observations and in-depth studies on the resistance of the tree in the context of climate change. Chizé has the particularity of being composed of a high proportion of beech trees which are at the southern limit of their natural range, an ecological and silvicultural situation which led to the creation, in 2006, of an Integral Biological Reserve dedicated to the monitoring of the evolution of these forest stands.
Identified as a Natura 2000 zone, the forest is home to 31 species of mammals, 6 species of reptiles, 8 species of amphibians, 78 species of birds and more than 530 species of butterflies. There are also many oak trees, including the 250 year old Emperor oak, but also the Papinot oak, which will be the site of the picnic break.
The northern half of the forest is mainly dedicated to wood production. The aim is to renew the stands destroyed by the 1999 storm and to make them less fragile, in particular by encouraging the mixing of species. The southern half forms the Sylve d'Argenson Biological Reserve. The stands are evolving freely and the beech is the subject of in-depth observations and studies in the context of climate change. It is said that Mélusine, the fairy of Poitou, flying over the forest of Chizé, absolutely had to find a watering place to bathe her snake tail. So she made an oak tree with seven acorns sprout from the center of which a natural basin filled with water. Today it is called Melusine's bathtub. Stop at the shop and restaurant. 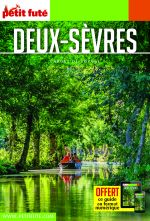