The discovery of cognac and its long history is today a reason in itself to go to the Charente. The area is full of vineyards surrounded by plains and hills with gentle slopes, where it is pleasant to stroll. The walks are punctuated by the visit of the unavoidable Cognac houses, which perpetuate an ancestral know-how and offer beverages with various subtleties. Let's take advantage of a weekend under the sign of spiritourism to visit the Maison Gautier which, founded in 1755, is one of the oldest houses in Cognac. It opens its doors to visitors to talk about its history, reveal almost all its secrets and participate in the tasting of its wonderful spirits. You can also take advantage of the opportunity to be curious and discover the riches of the Cognac region.

The fascinating history of cognac

Introduced in the 15th century by the Dutch, distillation is a technique fundamentally linked to the history of Cognac. It was this process that allowed the Charente wine to retain its quality when it was transported to the northern kingdoms, territories that were very fond of the wine called "brandwijn", the origin of the term "brandy". It was not until the 18th century that the technique of double distillation appeared. It was at this time that the Charentais made changes to their stills and sublimated their eaux-de-vie by ageing them in oak barrels: this was the birth of cognac, which would go on to conquer the world.

In the 19th century, trading houses were created. The cognac market was organized, developed and began to ship the beverages in bottles. Although the spread of phylloxera, an insect, ravaged a large part of the vineyard in the 1870's, it was reborn with dignity from its ashes thanks to the planting of grafted vines. The 20th century saw other crucial stages with the delimitation of the geographical area of production, the recognition of cognac as an AOC (appellation d'origine contrôlée) and the regional delimitation of the crus. Since the end of the Second World War, the different stages of the production of cognac have been regulated to protect the product. Cognac is a very successful spirit which is nowadays shipped to a hundred countries all over the world!

Visit one of the oldest cognac houses in Charente

A stop at the Maison Gautier during a spirits tour in the Charente allows you to discover the history and work of one of the oldest Cognac houses. Originally, the Gautier family worked as foresters in the Tronçais forest in the Allier region and sold oak to the Charente coopers. One can only make the connection with the motto of the house which is Du galt mer sui ("I am the Lord of the Forest"). Louis Gautier, grandson of Charles Gautier and the daughter of Aigre winegrowers Jacquette Brochet, developed the cognac trade from 1700. He is the one who is at the origin of the development of the House of Gautier, whose family obtains in 1755 the royal right to produce cognac as well as a founding charter signed by the hand of King Louis XV in person. Following this, the House of Gautier was founded and set up its cellars in the old water mill of Aigre. Located above the Osme River, the cellars benefit from the natural humidity of the river. During a visit to this prestigious cognac house, visitors will learn that it is this humidity combined with the mastery of a slow aging process in the cellars that allows for the blending of the best cognac eaux-de-vie, which then present an exceptional balance and aromatic richness.

It takes about 2 hours to visit the Maison Gautier, with a part dedicated to the ancestral history of the house. The visit then moves on to the cellars, where the team presents the work of cognac production, an ancestral know-how, and leads the visitors to Paradise, the cellar where the oldest eaux-de-vie are kept. Finally comes the tasting of the cognacs. The VS cognac from Gautier embodies the first phase of cognac aging, it is elegant, generous and fruity; the VSOP cognac is harmonious and greedy, a blend of eaux-de-vie from Petite Champagne, Fins Bois and Bons Bois; xO cognac, aromatic, intense and generous in the mouth, is made from old eaux-de-vie, some of which are kept in the Paradis cellar; Since 1755 Extra cognac, with the complex aromas of Grande Champagne eaux-de-vie, is made from the rare and old eaux-de-vie of the Paradis cellar. Let's not forget to mention the rare Tradition cognacs, Eden and Pinar del Rio, to be enjoyed with a cigar.

The tasting is the moment to distinguish what characterizes each cognac, to define one's preferences and to ask questions about the best ways to appreciate each of them: pure, with ice, extended with tonic or sparkling water, even in cocktails!

The cognacs of the Gautier house are multi-medal winning. They have won awards at the prestigious San Fransisco World Spirits Competition and International Spirits Challenge

Visit the surroundings of the village of Aigre

A visit to one of the most prestigious and ancient Cognac houses is an opportunity to discover the vineyard and to stop in the surrounding villages. You can cross the vineyard landscapes on foot or by bike. Cyclists can for example follow the Flow Vélo® or the Scandibérique. The village of Aigre, where the Maison Gautier is located, is a small charming village, crossed by the Osme river and labeled Ville et village fleuri. Nearby is also the picturesque village of Tusson, with a protected heritage and where some very beautiful old houses have been restored. The Renaissance Marguerite d'Angoulême house, which is home to the Maison du Patrimoine, is also to be found there. A medieval monastic garden is just next door.

And then, only 45 minutes by car from Aigre is the city of Cognac. A stroll through the town will allow you to contemplate the most beautiful elements of its heritage, its castle and the medieval style house of the Lieutenancy. Not forgetting of course a visit to the museum of the Arts of Cognac. This is a place to learn more about the history of the Cognac region through the ages, but also about the techniques used to produce the spirit that is the pride of the region and delights the palates of spirits lovers throughout the world. 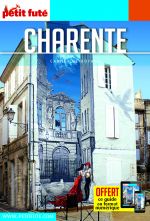