15 minutes from Narbonne, in the heart of the Narbonnaise Regional Nature Park, visit the Abbey of Fontfroide, a treasure of the Middle Ages. Founded at the end of the 11th century, Fontfroide joined the Cistercian order in 1145 and became one of the most powerful abbeys in Europe. In the Middle Ages, up to 80 Cistercian monks lived here under the enclosure, which did not allow them to leave the abbey grounds. Only the lay brothers were allowed to leave the monastery to work on the farms that supported the monastery. Although they also had the status of religious and were bound by monastic vows, the lay brothers formed a second community. They work for the monks in exchange for room and board and live in another wing of the monastery. The abbey played a crucial role during the crusade against the Cathars before experiencing a long decline from the 14th century. The monastic complex is magnificently preserved, with its 12th century cloister and chapter house, a sumptuous abbey church and its modern stained glass windows, the lay brothers' buildings and the 17th and 18th century fittings which sometimes give it a castle-like appearance. Vast terraced gardens are located around the abbey. In 1908, Gustave and Madeleine Fayet bought the abbey and began a restoration project. After centuries of austerity, prayer and silence, the abbey gradually opened up to life, color and pleasure thanks to the Fayet family. Artists, called Fontfroidians, participated in the artistic renaissance of Fontfroide, among them Odilon Redon, Richard Burgsthal and many friends, including Déodat de Séverac, Ricardo Viñes, Aristide Maillol. They created in this place a particular form of "Villa Medici" that they embellished with decorative elements. Abandoning its status as a monastic site to become a true place of artistic expression, the Abbey of Fontfroide is imprinted within its walls with rich testimonies of these residences, including Odilon Redon's monumental triptych The Day, the Night and the Silence as well as the stained glass windows by Richard Burgsthal. Today, the descendants of Gustave and Madeleine Fayet continue to maintain the monastic complex. They open the doors of the abbey to the 160,000 visitors who come every year. As you explore the different rooms, bathed in sunlight, adorned with artistic works and filled with the whispers and laughter of curious families from the region, it is hard to imagine the Cistercian austerity that reigned here when the monks still occupied the place. The abbey was then immersed in total silence, interrupted only by the reading of holy texts. During the visit, whether guided or unguided, those who are curious will plunge into the world of Fontfroide and will be able to explore the smallest corners of the abbey in order to soak up the atmosphere of the abbey and to get a glimpse of the daily life of the Cistercian monks. Some architectural features not to be missed:

The cloister. Composed of several vast and luminous galleries, it testifies to two distinct periods of construction, namely the 12th and 13th centuries. The lower part of the cloister, more stripped, is of Romanesque style, while the higher part, less austere, is of Gothic style. The capitals of the columns, which date from the Romanesque period, are covered with plant motifs, human or animal representations being forbidden by the Cistercian order in order not to distract the monks.

The alley of the converses. The converses had to use this narrow passage to attend Sunday mass, so as not to disturb the monks who, for their part, accessed the church through the cloister. Fontfroide Abbey is one of the few Cistercian abbeys to have preserved its alley in its original state. It is recognizable by its unique half-barrel vault.

The rose garden. Where the monks were buried for a long time, thousands of roses now grow. Installed on some two thousand superimposed tombs, the magnificent rose garden has been designated a Remarkable Garden, as have the adjoining gardens.

Throughout the year, the musical events are a real delight: Gregorian chants, classical concerts... Beyond the musical program, Fonfroide Abbey hosts many cultural events throughout the year. In the summer, night visits with sound and light give the abbey a sparkle! Don't miss the International Orchid Festival in the fall and the Plant and Massif Festival in the spring. Consult the online calendar to find out about possible events during your visit. The other asset of the place is its restaurant, the Table de Fontfroide, a reference in Mediterranean cuisine. More anecdotally, thanks to its remarkable state of preservation, Fontfroide Abbey is a privileged location for films set in the Middle Ages. Some scenes from Ridley Scott's film The Last Duel, released in 2021, were shot there.

Under the guidance of a pious man, come and discover the history of this bubble of serenity preserved for hundreds of years. Visits in July-August 2022 Wednesdays and Thursdays 7:30 pm and 9:45 pm. Duration: 1h30. Departure : Ticket office of the abbey. Information at 04 68 45 11 08 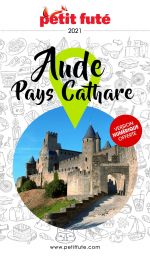