The virus from another world

The period of confinement disrupted the entire cultural programme of the Orne Departmental Council. Exhibitions and concerts in the second quarter were cancelled or postponed.

Without waiting for the doors of the halls to reopen to the public, the Department decided to organise an exhibition entitled "The virus from another world" in line with the health situation. During the confinement, Christian Dupont, president of the Alençon Photo Club, produced a series of images to express his emotions about the events and his daily life. With matches, real little inhabited characters, he composed breathtaking images.

His photos, accompanied by texts by journalist Jean-Marie Foubert, will be presented to the public on the Departmental Council's notice boards from Monday 11 May

"Sincerely, I didn't think that my little photos would be exposed" and so quickly one could add. As the confinement is announced, Christian Dupont, an amateur photographer, challenges himself: "As president of the Alençon photo club, I said to myself that it would be good to make pictures during this period. A way to show our emotions through photography and then discuss it with the club members. "And emotion, the former director of the social centre of Courteille d'Alençon has no shortage of it. Just like imagination

With a few matches, he launches into the creation of paintings of an originality as surprising as it is disturbing: "I set up my studio to prepare my sketches. In the morning, during my authorized walk, I thought about the theme I was going to develop in the afternoon. This work was for me a necessary filter to get through this period that I finally didn't see pass. »

The photo is sober. Two matches representing human frailty are face to face, the spirit filled with light: "With this first photo, I wanted to give a soul to my matches that bring life and hope. " explains this creator. No human representations on this subject however... so human. Everything is suggested with bits of accessories and matches. All bathed in a carmel light giving to what could have been banal a higher and why not spiritual dimension

With patience, Christian Dupont declines the news and lets his messages slide: "I wanted to digest information such as Edouard Philippe's announcements, the imprisonment, the Elysée, but also to talk about childhood and bring at the end a real message of hope with a ball where life will finally be the big winner" says this photographer director of delicate and precise montages

As the days go by, Christian Dupont continues to align ideas like pearls on the same necklace. A family in the news hour comes crashing into a child's dream. If around the table, experts listen to specialists, in France, the virus and its shadow continue to break out and Bercy wavers. Fortunately, May 1945...May 2020 the wheel of life turns.

During the confinement, Christian Dupont shows the results of his photos to the journalist Jean-Marie Foubert, who falls under the spell of the photographer's work

The man of letters does not hesitate to take up the pen to accompany each photo with a chiselled text: "Faced with the virus, confinement is astonishment. What is it all about? Where does it come from? What to do or not to do? (In)certainties, (in)credulity, leafing through ignorance, thirst for knowledge, endless questions... The inhabitant relies on the scientist sitting on his book. A scientist consulted, questioned, perhaps prayed... Confinement, a mixture of physical protection and psychological aggression is a test: can we isolate the brains? "Jean-Marie Foubert writes to accompany with his words the precious Prayer that opens this exhibition

In addition to the flame that illuminates each photo, Christian Dupont had fun playing with light like a painter in front of his canvas.

Permanent exhibition on the gates of the Orne Departmental Council

When: From Monday 11 May to the end of June 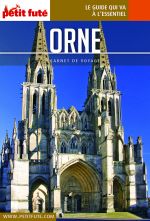 TheOrne is a formidable Normandy territory, with a mosaic of landscapes to discover. The Normandy-Maine Regional Nature ...

This Park is a somewhat secret, sincere and endearing territory with its cows, apple trees, pear trees, forests and ...