Normandy is cider, camembert and much more than that! In the north-west of France, on the banks of the Channel, it is a green and blue patchwork with 600 km of coastline and a bucolic and humid countryside, rich in monuments, traditions and know-how, several of which are classified or listed as World Heritage Sites by UNESCO. Normandy is the leading producer of oysters, mussels, whelks and scallops. People come here to enjoy these products, but also to cycle and horse ride, to go hiking or on a pilgrimage, to enjoy the pleasures of the seaside, to visit medieval sites and historical walks, and not forgetting to meditate on the D-Day landing beaches...

Normandy is home to some of the most beautiful villages in France, spas, regional nature parks and prestigious towns. Among the jewels of the destination: Rouen, Mont Saint-Michel, Honfleur and Deauville, Le Havre, Etretat, Giverny, Caen, Bayeux, the Haras du Pin... The hinterland with its bocage and its castles, Bagnoles-de-l'Orne, a Belle Epoque spa town, the Petite Cité de Caractère of Saint-Céneri-le-Gerei or the magnificent Sées, offers a delightful diversity. Will you go blueberry picking or mushrooming, visit a medieval town centre or go white water fishing? The potential of this tourist destination, which is kindly mocked for its bad weather, is endless! And to find your way around, your tourist guide will be very useful

What to see, what to do Normandy? 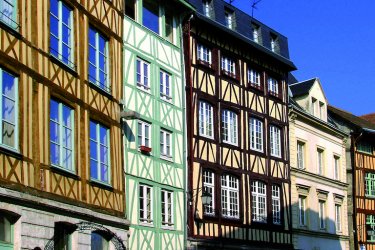 What to visit Normandy ?

When to go Normandy ?

If you have chosen Normandy it is because the rain does not stop you. Then it may be the milder temperatures between May and November that will attract you. The feeling of heat in the middle of summer will be reduced on the shore and on the heights of the Mancelles Alps. Conversely, in the middle of winter, hilly and wooded areas can be icy. In any season you will have to be patient with the fog that too often prevents you from enjoying the landscape. In summer, many cultural, sporting or festive events are held in towns and villages. During the off-season in remote hinterland areas you will have difficulty finding an adequate tourist welcome. Finally, you should know that all year round, major events awake this or that area: Jazz under the apple trees (Coutances), Festival rock d'Evreux, Foire aux harengs et à la coquille Saint-Jacques, Festival international de cerf-volants, Marathon de la baie du Mont-Saint-Michel...

On the roads of the History of Normandy

Museums of Caux Seine agglo : history of the Norman Seine and Gallo-Roman heritage

The Bayeux Tapestry: history and specificities of an exceptional work of art

If there is a land of cheeses, it is indeed this one. Indeed, in addition to the famous camembert, pont-l'évêque and other well-known names, there are hundreds of cheeses here, for every taste and every desire. Proud of its production, Normandy exports large quantities every year. Many of these cheeses are duly labeled and protected.

A land of predilection for equidae, you will find many activities to practice all over the territory. Horse races, breeding, stud farms, riding schools, you have a wide range of choices. Horse rides, initiation courses, itinerant camps...: the more experienced can register for the various competitions organised in the region.

A delicious sparkling apple-based drink, cider is a must in the local gastronomy! Sweet, brut or semi-dry, its light alcohol content makes it ideal for an aperitif or to accompany a dish delicately. A true emblem of the region, cider has its AOC in the Pays d'Auge and also in the Perche

The region experienced one of the major episodes of our contemporary history with the Allied landings, in June 1944, on five beaches of Calvados and the Channel. From Utah to Juno Beach, thousands of men lost their lives in the name of our freedom. Discover the essential sites: Caen Memorial, Sainte-Mère-Eglise, museums, cemeteries...

The production of lace has shaped the fame of Normandy. From the 17th century to the beginning of the 20th century, Alençon, Caen and Bayeux became manufacturing sites. Today, the specific know-how of the region is renowned. In particular thanks to the Point d'Alençon, which this year celebrates its tenth anniversary as part of UNESCO's intangible heritage.

Here, each village has its own bell tower. So, don't hesitate and go and discover this rich and varied heritage. Don't miss : Saint-Catherine d'Honfleur and its wooden walls, the very contemporary circular church of Yvetot, the semi-troglodyte building of Saint-Georges d'Orival or the cathedrals of Sées or Coutances, just to name a few!

Normandy loves culture and offers it in festivals. On the music side, Les Papillons de nuit, Beauregard, Jazz sous les pommiers, Art'Zimutés and Art Sonic are at the top of the bill. The cinema is not left out with the American film festival of Deauville and the romantic film festival of Cabourg. Each year, thousands of people attend these festivals.

Feel like kicking a ball? In the region, you have the choice between about fifty sites to exercise your passion. Adept of a beautiful sea view: Bayeux, Etretat or the Cotentin peninsula should please you. If you are rather a lover of (hilly) countryside, go to Bellême, Clécy or the green forest in Rouen.

Inseparable from the Second World War, Normandy is also inseparable from the medieval era. Bayeux, Caen and Domfront-en-Poiraie still have magnificent vestiges of the Middle Ages. Follow in the footsteps of William the Conqueror, Duke of Normandy born in Falaise, or Joan of Arc, who died at the stake in Rouen. Things to do: medieval festivals of course!

With 600 kilometres of coastline, there are plenty of nautical activities to do in Normandy! Catamaran, optimist, sand yacht, kitesurf, paddle, windsurf... the sea offers you one hell of a playground. And if you're more of a "freshwater sailor", head for the waterways in the Seine Valley or in Normandy Switzerland for canoeing and kayaking trips.

Trails, long-distance footpaths (more than 3,000 kilometres), greenways... if you like walking, you will be served here! What better way to discover the charm and authenticity of the region than to walk at the rhythm of your steps. Each department offers multiple possibilities. Topoguides at your disposal.

If there's one colour to represent Normandy, it's her. And it is not your escapades in Normandy Switzerland, on the roads of the Perche or in the plains of the Neubourg that will prove you wrong. Thanks to a nice rainfall and mild temperatures, the Normandy greenery makes the cows that graze in the meadows happy.

When you are astonished or surprised, you spontaneously say "uh la!

When you bathe in water at 16 degrees, you find it good!

You don't talk about a fatty meal but about a rich meal.

You say "see you soon" or "hello" to a person you are going to see again in the afternoon.

For you, the calvados is used to make room in the stomach for the next dish.

Hospitality is second nature to you.

You know that teurgoule is not a kind of plant, but a dessert made of rice pudding and cinnamon.

You get annoyed when someone tells you that the region is rainy: no, it is not more rainy than the others!

The umbrella is not just an accessory. It is really useful to protect yourself from the regular showers in the region.

Cheese platters are your specialty, and you never fail to put camembert, livarot, neufchâtel and pont-l'évêque in a good place!