A world apart, an Irish rock lost in the Atlantic, a wild and notched island, classified as UNESCO World Heritage Site since 1996. Described by Irish playwright George Bernard Shaw as «part of the dreamlike world», Skellig Michael has a unique religious history. One cannot help but imagine the daily life of the monks isolated and exposed to the storms, who lived on this monastic site until the th century, before settling on the mainland in Ballinskellig. Highlights of the visit:

The staircase of 618 steps to climb to reach the stone huts in the form of hives (gaélique in Gaelic) exposed to the elements at the top of the island, at 218 meters altitude. Attention to people who are prone to vertigo! Historians tell us that the community of monks would drop these steps daily to fish for breakfast. A lesson of humility…

The monastic village dating back to the th century, one of Ireland's first monasteries, is dominated by a large stone cross, called "Peter of the priest". The view is spectacular. An atmosphere of contemplation, isolation and prayer, ideal for emptying your head.

The lighthouse was built around 1800 and automated in 1987. Now disused, it stands down as a forgotten toy.

Accessible in boat since Portmagee, Valentia Island and Ballinskelligs.

Skellig Islands
You are the person in charge of this place, click here 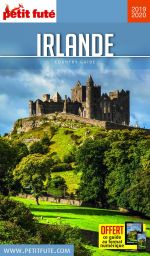