Basel, the third largest city in Switzerland, celebrated its carnival for 72 hours at the beginning of March, as it does every year. A mythical moment during which a wind of madness seized the whole city and we were there!

As every year the carnival kicks off on the Monday following Ash Wednesday, with the Morgen-streich at 4 am. So this year it was Monday, March 6..

You really have to get up early to see this spectacular parade, but it's worth it!

By 3:30 am, most of the tens of thousands of spectators are already gathered on the town hall square where the parade starts. Some of them didn't sleep at all, preferring to feast in the surrounding bars while waiting for the show to start.

Suddenly, a city clock bell rings four times. It's 4:00 on the dot.

And at exactly that moment, the city is suddenly plunged into darkness

More than 200 huge lanterns caricature the year's highlights as they parade to the rhythm of drums and flutes.

All of the people marching wear iconoclastic masks, and some also wear pretty, handmade mini lanterns on their heads.

Between the repetitive music of the drums, the soft light of the lanterns, and the lack of sleep, one is as if plunged into a hypnotic dream. A mind-blowing experience in the truest sense of the word, but one of incredible beauty.

Once everyone has had a good rest after the morning parade, the groups that marched in the middle of the night and that we could barely guess in the chiaroscuro of dawn, are back.

At 1:30 pm, they parade again but in broad daylight this time! This is called the "procession", almost 500 "cliques" (the official name of the carnival troops) parade once again to the rhythm of drums and flutes

Nearly 12,000 disguised people follow one another in cliques and we discover the satirical theme they have chosen according to their disguise and the design of their giant lantern

This year it was Donald Trump and the Brexit who were in the spotlight for satirical themes.

This new parade is impressive and confetti is raining down, even on us!

From Monday evening to Wednesday morning, the lanterns of the cliques can be admired on Münsterplatz. From near and far, it's a feast for the eyes.

On the second day of the carnival, hundreds of children in disguise, alone or in groups but always accompanied by adults, form a merry procession on foot or on floats. They throw confetti on passers-by and hand out candy to everyone.

The "Binggis"-the name given to the children in Basel-are dressed according to their moods and desires. And they're all over the moon! And you're welcome to it. Suddenly the whole of Basel city centre becomes their playground.

It's really a crunchy and very festive show!

It is not a smaller carnival compared to the adult carnival, it is exactly the same size with an even more fun side and with even more confetti.

Wednesday, March 8, end of the carnival

It's already over, but we leave with pictures in our heads and still some confetti in our pockets when we get on the TGV Lyria.

In barely 3 hours we'll already be in Paris but we tell ourselves that we'll be back next year to relive this typically Swiss carnival madness! 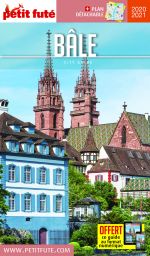 One thing is certain: in 2020, you will move! Are you thinking of moving abroad, but don't yet know very well in which ...

From 15 to 18 June, it was Art Basel in Basel, Switzerland, a few kilometres from the border with France and only 3 ...

Basel at the center of art

Au crossroads of Switzerland, France and Germany, Basel is an essential cultural place. But she's more than that. As it ...